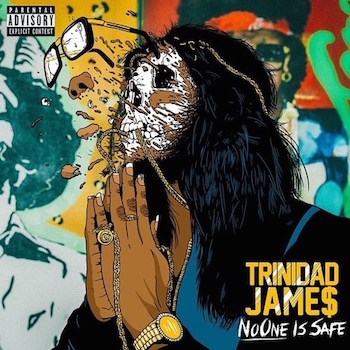 Trinidad James :: No One Is Safe

By this point, you should know how I feel about both Nicholas Williams as a person and also his rap persona, Trinidad James. The former is a nice guy and the latter irks the hell out of many hip-hop purists. He was supposed to be a joke of a one hit wonder and then out of here — a cheap thrill at best. But on the strength of “All Gold Everything,” James found himself with a deal from Def Jam to the tune of reportedly $2 million. That’s a lot of gold for the Atlanta, Georgia native to say the least. Well, eventually James announced that he had been dropped by the label and that his forthcoming album would be free. There’s an old adage about everything happening for a reason and perhaps the situation with Def Jam was the best thing that could’ve happened to Trinidad. At the top of the year, James dropped the brief but promising “Wake Up EP”. He showed a slight bit of growth as an artist but at the same time was able to showcase what he does best up to this point in his career. Towards the end, he promised that his album would be the realest he’s been to date. I was in the middle of writing my review of the “Wake Up EP” as I got the word that the new project was available. To be fair, I downloaded it but chose not to listen until I was done with what I was already working on in the best interest in being objective. When I finished up, I hit play just to see what T. James was going to be talking about this time.

Similar to his “10 Pc. Mild” album, Trinidad starts off “No One Is Safe” with a taste of island flavor with Israel Kamakawiwo’ole rendition of “Over The Rainbow” before the beat for the Villo-produced “Jerome N Da House” drops and James gets busy. As it turns out, Trinidad isn’t holding punches or taking any prisoners. There are a plethora of metaphors that could be used to describe what’s going on here, but to put it in its simplest terms, Trinidad James has improved his flow but he’ll never be mistaken for a wordsmith by any stretch of the imagination as he raps:

“I was in Hawaii, in the trees with Yeezus
Praying up to God that Yeezy see me
Mopeds for the team, check the scenery
In the Louis store, got my name in the system
Fucked that bitch so good, I saw my name in her pussy
I’m a real nigga, I don’t play with you pussies
I’m only talkin bitches when I play with some pussy
Only speaking real, nigga hope that you feel me
Outfit crazy, nigga hope that you see me
BET Awards, nigga what’s up baby
Flyest freshman with a swag from the 80s
Maybe the 90s
Don’t care if you like me
Every nigga doubt me, but you just wanna sign me
I don’t get lucky, I got impeccable timing
I said all real gold, nigga fuck them diamonds
The nigga with the ugly mouth got hoes smiling
Hello”

Further along in the song, he throws out a few “Martin” references and eschews anyone thinking that he’s in need of a handout or thirsty for a hit. One could argue that he has no qualms about getting those royalty checks for Bruno Mars and Mark Ronson’s “Uptown Funk” though, but that’s neither here nor there. The “Nigga, nigga, nigga” horns are amazing on that song, by the way. Mr. “Tuesday” himself, ILoveMakonnen makes an appearance on the Sonny Digital-produced “H.O.M.E.,” a bass-heavy number that’s strictly aimed at the haters and dares to ask the question “Why they hatin on me?” If you hear a track and someone’s yelling as if they were simultaneously possessed by Ric Flair and the Holy Ghost and had one chance to figure out who it was — you guessed it, OG Maco would be the answer. He makes an appearance on “ALLAU” and the spirit even finds its way into Trinidad as he does a bit of his own yelling. The upbeat “Definition of a F#%@ Nigga” finds James joined by Problem and Lil Debbie as the trio each cast disapproval upon those who don’t have their own means of surviving and endlessly use others to get by in addition to being clingy losers. Trinidad does his best to alleviate women of such said problems by convincing her to choose him instead, as he raps:

“And ever since she met me, she tell me I’m a blessing
And every time he call her, that nigga there be stressing
Send him to the voice-mail, nigga leave a message
She don’t pick the phone up, nigga get to texting
Real live fuck nigga, by the definition
Calling from a block number, nigga you a pussy
When you walk by man, know that we be looking
And if she give it up, you better know that we fucking
So if you love the pussy, boy you better go and follow it
When she get some good dick, nigga she gon swallow it
Make her take her draws off and throw em on the floor
We didn’t make it to the bedroom, I fucked her on the stove
I don’t want your girlfriend, I don’t want ya hoe
You be in her DMs, I be in her throat. James”

“Only N Atlanta” and “Talk Dat Shit Trinidad” follow and as one might expect, the latter finds T. James talking big shit about how so many people have bitten his style — as far as fashion trends and such, not rapping. To an extent, he may have a point. But then again…big gold, nappy afros and Versace were around way before anyone ever heard a single second of a song by anyone named Trinidad James. A few peeks at his Instagram will show just how fresh Dad (as he affectionately calls himself while he sips his tea like Kermit) can be.

Back when “All Gold Everything” was all the rage, James took a lot of flack for the glorification of popping Molly and of course its aftereffects. Well, his critics will be pleased to know that he no longer is a fan of the drug and even proclaims “I don’t want no more Molly” on “Shroom Party.” The groovy and playful “T. James Express” follows before taking on more serious material as the project takes its final turn toward the finish line. “Fuck That Stress” confronts struggle head on and reassures the listener that even though things may get worse before they improve — they WILL improve. The project closes with “My Rule” and it’s Trinidad’s declaration that he’s going to do whatever he wants to do whenever he wants. As long as he’s being true to himself, it doesn’t matter to him what you think. His life is a highway and if you don’t like it, you can get the fuck out of his way because he’s going to keep his foot on the gas regardless.

As the project concludes, I’m left with a good feeling about Trinidad James. He’s continuing to defy the odds and remain relevant in a landscape that’s littered with so many who have come and gone without as much as a goodbye. Perhaps the situation with Def Jam was too constraining for James and when he said his album was now “free,” he wasn’t talking about monetary value but rather free from captivity. In anycase, the end result is equally surprising and refreshing and perhaps Trinidad can talk his shit after all.