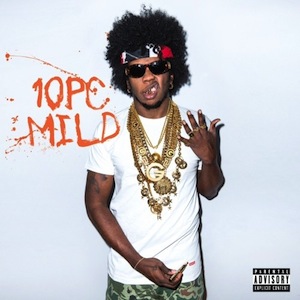 For all intents and purposes, I’m STILL sure that Nicholas Williams is a nice guy. His on-stage persona, Trinidad James is STILL making people feel a certain way about him and the state of hip-hop. The jokes are STILL plentiful, but James is STILL getting the last laugh – all the way to the bank. In the year that has passed since “Don’t Be S.A.F.E.” was initially released, James’ profile has certainly increased. He’s doing live shows in some of the biggest venues and making guest appearances along this side some of the greatest in today’s hip-hop stratosphere…not to mention the major label deal from Def Jam. The video for “Females Welcomed” was actually filmed in Trinidad & Tobago and directed by legendary photographer, Jonathan Mannion. A great number of people have labeled James as a one-hit wonder, but he’s going to keep riding that wave until the tide dies down.

So what’s all the fuss about this time? Well, Trinidad James is back with his latest offering “10 Pc. Mild.” The title is a reference to his favorite meal from American Deli and true to its name, the project is ten tracks deep. Production is handled by the likes of Childish Major, Travis Scott, J. Padron, Kyle King, Villo, Young Chop, K.E. On The Track, Jack Donaghue, XXYYXX, Westwood and Young Roc. This time around the featured guests include some big names like Cyhi The Prince, Danny Brown, Childish Gambino and Gucci Mane, to name a few. When asked about the feel of this project, James basically said that it was a tape filled with real turnt up music, a contrast from “Don’t Be S.A.F.E.” which James described as “chill.”

Things open up with “WutElse” which is comprised of a short medley followed by a mellow Trinidad James speaking over soft piano keys welcoming the listener to the affair before turning up and taking aim at any would-be naysayers, as he raps:

“Material Things Hard To Deal With” follows and features Cyhi The Prince as the two pontificate about the finer things in life – hoes, clothes and that money, of course. If nothing else, “Shut Up!!!” has the potential to get the club crunk after things have dulled down some. The vibe is decidedly more mellow with “Hipster Strip Club.” At first listen, the song has a sonic feel to it and with subsequent spins, the question becomes just what is going on here? Is James telling the story of a troubled dancer? Is the track a big drawn out metaphor of him waving goodbye to Molly? Perhaps it’s yet another trip. Mentions of the drug are almost brought to a screeching halt on this project, so it’s hard to tell for sure. However , the following song “Quez” features appearances from Fabo of D4L, Danny Brown and Playa Fly and has a hook that proudly boasts of being “too fucked up,” so maybe not. “HomeGirls” comes across as a watered-down sequel to the immensely popular “All Gold Everything.” The cadence is there, but the other endearing qualities that made “All Gold” such a hit just aren’t here this time around. James and Rich Homie Quan turn up and tear up everything on the Young Chop-produced “Jumpin Off Texas.” The following “Binos vs Brees” isn’t really a song, but rather an extended skit that goes on for about four minutes. The basic premise here is that Trinidad’s girl is asking him to do things around the house over the course of a few weeks, but he refuses to do any of them. One day, he comes in and finds everything taken care of, only to find out that the neighbor had done it all. He asks what the neighbor charged and he becomes enraged when he finds out that she had the option to either bake him a cake or have sex with him. After striking her, he asks what kind of cake she made, only to find out that she hadn’t made a cake at all. It’s a reminder of an old joke from the Def Comedy Jam days of the early 90s.

The project comes to a close with “Rosenbergs” and “Eastside.” Trinidad James is at his best when he’s defending himself against critics and uplifting his own loved ones in the process and this is the theme on the former track. Towards the end of it, he makes it clear that this is not a diss song. He feels that instead of dissing someone, he thinks it’s more beneficial to help that person and give them guidance before minimizing his opinion by referring to himself as a one hit wonder. James brings in the big guns for “Eastside.” Gucci Mane delivers one of the most telling lines of the project when he says “I’m a trap nigga, I’m not hip-hop.” Young Scooter, Alley Boy and Childish Gambino give it their all before calling it a day.

So does lightning strike twice? Better yet, for the sake of keeping in step with James’ obsession with the precious metal – does James strike gold once again? The long and short of it all is no. There doesn’t really seem to be a breakout hit here that even remotely has the catchy it-factor of “All Gold Everything” or “Females Welcomed.” “Jumpin Off Texas” has a bit of potential to get the clubs crunk and “Rosenbergs” is the closest contender to the still-excellent “Givin’ No Fucks” from “Don’t Be S.A.F.E.”. If not for his music, Trinidad James will remain relevant because of his personality. It really shines through during his interviews. Perhaps James is saving the hot and spicy stuff for the major label album as “10 Pc. Mild” comes off just a little bit bland with an aftertaste. It’ll do for now.