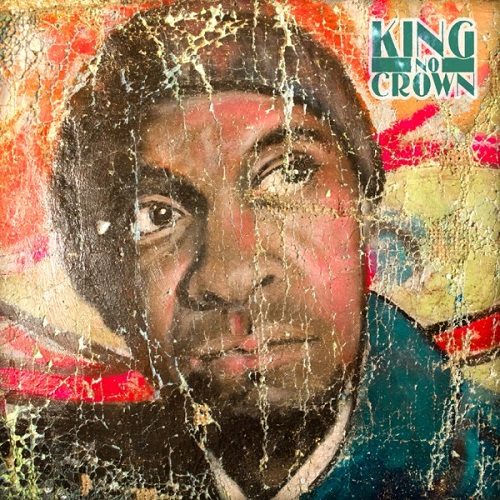 In advance you should be aware that this is album is not available at retail for AT LEAST another month, so it’s possible the finished product may be completely different when it’s in your hands. It’s also possible that Blueprint is thoroughly satisfied with the album as it stands now, which is why everybody involved is happy to send out screener copies this far ahead of time. It may not change one bit between now and late April.

“So many question why the art I made had to change
Cause I evolved while so many artists stayed the same
Much respect to all the pioneers who paved the way
But if I want what they’ve got, I’ve got to make something great
I don’t believe that any man has all the truths
Cause consciousness changes as man discovers more proof
You’re not a student ’til you put that little fact to use
Nothing scientific or spiritual is absolute” – “The Talented Tenth”

I suspect it’s the latter – especially given that “King No Crown” is self-produced and feels to me like a finished and polished product that’s par for the course in his track record of high quality – and there’s a fifteen+ year catalogue of music that backs that up. It’s not accidental that Blueprint talks about evolving while other artists stayed the same – he’s continued to reinvent himself with each release, constantly seeking self-improvement along with ever doper beats and rhymes to meet the demands of his fans.

“I can’t be stopped, no matter who the odds favor
Defy all the odds makers out in Las Vegas
Start on the block, expand across all nations
While man plots, I’m preoccupied with God’s favor
“King No Crown,” he come around, all praises
You runnin your town? You ’bout to get your walking papers
Cause none of you clowns could ever fuck around with Weightless
We may be independent, but we all major” – “Unbreakable

Blueprint’s flow is very direct and precise, and much like the attention to detail he shows on his tracks, there’s never a sound you hear that isn’t exactly what he intended artistically. At times I’ve got to imagine his process is a bit maddening, especially when a lot of artists accidentally make hits with almost no effort, but he sums up his philosophy well on “Trump Tight” in a few words: “When it’s done right, then they gotta listen.” Over the course of an hour you get continual reminders of his thought process – as in the intro of “Nothing Like This” where dialogue snippets talk to use about the monotony of “doing the same shit over and over” – and then he proceeds to sing his way through the song to change the vibe up. If that wasn’t enough of a shift he goes even further on “Not Afraid of the Dark,” where he only occasionally interjects background vocals over the track – sort of like how a Notorious B.I.G. track would sound if it was only the beat and Sean Combs (but much better).

There’s no doubt that Blueprint has an agenda on “King No Crown,” and you’ll hear it on “They Like Power,” but it’s generally to challenge the status quo and/or complacency in the face of wrongs – whether locally, nationally or globally. “Hard to speak with honor when you all about a dollar.” So he’s not obsessed with materialism – and never has been – but there’s no doubt that he’d like to sell more than a handful of copies of any book or album that he releases to sustain his artistic output and label imprint. No need to worry Print – “King No Crown” will sustain the fans you’ve built up over the years. From the declaration of “breaking the mold” on “Black Intellectual” to the stripped down beats and rhymes of “Fist Fight” to the dope Weightless duet “Maybe My Generation” featuring Illogic, everything clicks and works. At times it’s a bit heavy – perhaps that’s ironic for his label – but it’s always backed by a fundamental sense of purpose and vision that pervades every Blueprint release so far. Be sure to get this one when it drops.