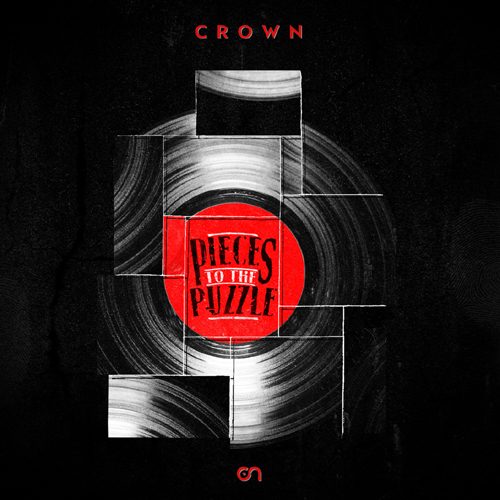 Crown :: Pieces to the Puzzle

Crown is one third of French production team Grim Reaperz. His solo showcase “Pieces to the Puzzle” has been steadily collecting dust on my shelf since its release one year ago, let’s see if unfairly or not. The album opens with a feature from Philadelphia native Grand Agent, who has lived in Europe for an extended time, which we take as sufficient qualification to kick off the proceedings. The structure of the song isn’t bad, especially with the deliberate hook, but Grand’s performance is typically uneven when he begins with the statement “Canibus came in the game swingin’ at a great / and line for line James Todd got ate / But career for career, it’s nowhere near / Landslide – a man died in his rookie year / This is how you applaud objectively,” but lacks the clarity of thought to continue the argument and instead gets sidetracked by “metrosexual non-intellectuals.” Still Crown’s combination of classic breakbeat drums and organs make “I Squeez” a worthy opener.

After a promising vintage soul sample, “Here We Are” devolves into a basic headnodder. Soulstice (“A don among divas / Elephant in the room, gotta choose not to see us”) and Main Flow try to stick out but the pedestrian pace of the beat holds them back. Any rap track named “The Message” has big shoes to fill, and Crown’s own “Message” suffers from a typically random assortment of international rappers (PMD, Flynt, Akhenaton, Lil’ Dap). German DJ Chinch 33 provides fitting vocal cuts, but all the expertise can’t prevent the song from resembling some sentimental fare you’ve heard a thousand times over. More inspired is the following “Back in the Dayz” with a wistful sax and rappers from three different continents – Kouzumin from France, El Da Sensei from the States, Paloalto from South Korea – reminiscing on their formative years in hip-hop. Retrospective or not, this is hip-hop done the right way.

A flute floats prominently atop the choppy mid-period-Primo rhythm of “R to the X” featuring Worcester, MA crew RADIx, which, at least around here, we hadn’t heard from lately but who apparently collaborated with Crown on an EP called “Right State of Mind” in 2008. Bostonites are, next to New Yorkers and Detroiters, among the internationally best connected (or most requested) rappers. Reks and Krumb Snatcha are joined by NY’s Kool Sphere on “Survival Challenge,” delivering lyrically rich and socially conscious verses, as can be expected from the two vets. What’s also to be expected are collaborations that fail to generate any kind of chemistry. What do Phil Da Agony, J-Hood and Saigon have in common? Nothing, except that they’re all on “No Doubtz.” Masta Ace stands out in his sleep from most rappers who vaguely followed in his lane, and that’s what remains from listening to selections like “Lesson” and “Rap Life.”

All the contradictions of ’90s nostalgia are painfully laid bare on “Then and Now” with the following hook:

So which one is it now? The same rapper (I can’t be bothered to find out if it’s Kwote1, Prime, or Tribeca) then rhymes (paraphrasing Greg Nice waxing nostalgically about ANOTHER ERA):

It’s really pointless to argue here. Worse than the rose-tinted glasses they hit their brick wall with is that this generation of backpack rappers (and beatmakers) very rarely ever reach the level of skills and originality ’90s hip-hop represents. You don’t even have to understand French to realize that their francophone counterparts here are more agile and eloquent on the mic. Veteran Dadoo flows playfully and rhymes intelligently over the breezy “Warning” (accompanied by extensive “Top Billin'” scratches), Belgian Scylla contrasts the ethereal vocal samples of “Ecrans De FumÃ©e” (‘Smoke Screens’) with a gritty growl, Demi Portion, Gys and Phileas Flow manage to find inspiration in the generic soundtracky “Street Life,” and FayÃ§al, Gwenzel, Tupan and reunited ’90s group ATK deliver characteristically poetical verses on the piano and flute marrying “En Roue Libre” (‘Letting Loose’). In comparison, the almost pop effort by UK group Caxton Press, “What The World Needs Now,” comes across as wooden, rendering obvious the disc’s lack of fresh talent on the anglophone side.

Some guests are exempt from living up to the lofty standards being promoted here. Second Korean representative Rhyme-A- does his thing in English on “W.W.W. Part 2,” providing vocal scratches himself beatbox-style. Old dogs like Rasco shouldn’t have to learn new tricks, especially when they’re still good for a solid tune and able to claim the title track no matter the competition.

Of course Crown and his kind are entitled to perhaps more than a modicum of gratitude from the rap nation as they practice a style that’s obviously in demand, last but not least on the part of certified legends who can’t really get down to the latest cutting-edge concoctions. The problem is that the Enemy Soil affiliate and many of his allies stick strictly to the rap producer’s handbook from the millennium’s first decade without daring set foot in the actual ’90s or attempting to devise a traditional hip-hop sound for the current decade. There’s no denying Crown’s expertise. The pieces in his puzzle fit, the musical elements are all arranged with care and competence, but with a few exceptions the beats on “Pieces to the Puzzle” complacently settle into the same safe groove with phased/looped chimes and rhythms eager to give neck massages. Some may call it an homage, but to me it’s really easy-listening boom bap, an oxymoron that we should have left in the 2000s.