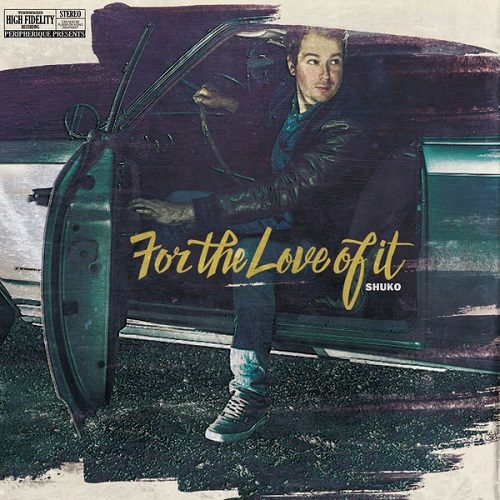 Shuko :: For the Love of It

Save for a certain crew that shall remain unnamed for once, Shuko is perhaps Germany’s internationally busiest producer of the last decade, having done beats for a number of American acts ranging from Jedi Mind Tricks to Talib Kweli. Simultaneously he made a name for himself domestically, his clients including a number of notorious German street rap labels.

While he has always been able to tailor his tracks towards the specific needs of MC’s, his productions regularly let on that Shuko possesses a musician’s ear, ever so often escaping the monotonous loop patterns and developing a live-band, even orchestral dynamic. Lately he’s found artistic and commercial success with more family-friendly collaborators, particularly German pop rap giant Cro and Swiss soul singer Ira May. The title of his first proper solo album with vocalists, “For the Love of It,” suggests that Shuko holds the project close to his heart. It’s an international offering, and while it doesn’t feature any German, it at least makes use of his French connections, featuring French parts on three different tracks.

Like many hip-hop producers before him, Shuko gravitates to a past era of music. “For the Love of It” is essentially a soul record with rappers and singers. On opener “Allow Me” he tries his hands at a ’70 sample others have handled before, but with his precise stop-and-go arrangement he turns it into a soul stormer all of its own. Rappers couldn’t mess this one up even if they wanted to, but of course Pete Philly, Evidence and 20syl are all able to appreciate the uplifting instrumental. “Be Yourself” is one of those slightly understated, but all the more moving hip-hop soul tracks featuring Blu at his best. Definitely a must-hear for all who still nurse the hope Blu will one day create another “Below the Heavens.” He returns for “Grind” joined by Queens representative Kidaf waxing philosophically over slow booming drums sprinkled with light showers of pianos and organs. Tracks that put rappers to the fore also include “Nothing Changed” and “The Same,” whose biggest features consist of Masta Ace and C.L. Smooth, respectively, but also each host a French guest. Smooth and playful, they are musically solid, but perhaps the most obvious examples that Shuko is not out to reinvent the wheel this time around.

While not a breakthrough invention either, it’s when Shuko purposefully pairs rappers with singers that “For the Love of It” reaches the next plateau. Not everyone will dig “Heatwave,” a slick, glossy uptempo number shared between Talib Kweli and Leslie Clio, but it helps stretch the album’s spectrum. “Pull the Trigger” too aims for a specific style, the reinterpretation of ’60s soul as some kind of theatralic soul noir. Ira May’s vocal style will inevitably draw Amy Winehouse comparisons, but what ultimately makes the song a success is that veteran B-Real, too often still only reduced to his work with Cypress Hill, gets into the song completely, helping tell the dramatic tale with a detailed verse. “Best Friends” is actually derived from a musical tribute Shuko paid to Amy earlier, and it still works without the direct samples, British rapper TY and American femcee Akua Naru tracing the threads of once close friendships that came apart.

While sticking to traditional rap styles throughout, the album takes a disctinctly old-fashioned turn with the appearance of Grand Puba, who not only reminds us that he was one of the originators of off-key singing but also denies having any “Regrets.” Skuko and singer Kinga Lizz are merely witness to a song that is strictly about Puba, recalling past situations when producers like Shuko wholly depended on the mood of their famous guests. “Change Gonna Come” on the other hand sees Saigon, Vinnie Paz and RA the Rugged Man each letting off a round of political rhymes. On a whole (including Carolyn D’Elia’s pop-meets-gospel chorus) the track is more Saigon territory, but Paz and RA both break out their most political arsenal.

By closing with the only exclusively sung contribution (Rox on “Little Bit of This”), Shuko reaffirms his intention to produce music that strengthens the long-lasting link between soul and hip-hop, and that this brand of hip-hop doesn’t simply pillage the archives but carries on tradition knowledgeably. With one half of the album sample-based and the other incorporating own recordings, “For the Love of It” is not your average self-absorbed producer project where source material gets chopped and sliced at random and rappers get to trample on it some more. It’s a labor of love.