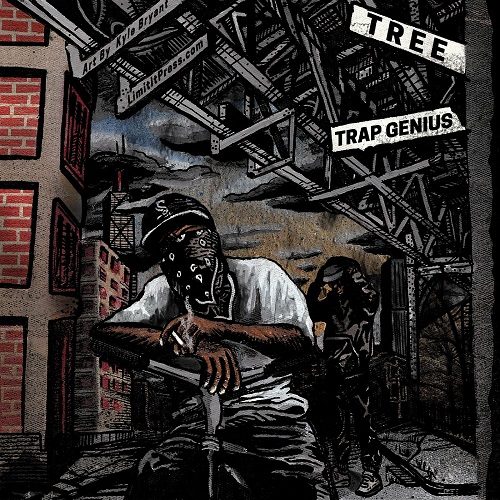 “This shit was a dare. They told me to do some trap music.”

That’s the first thing Chicago MC Tree says on his latest mixtape. It answers the question most listeners were probably asking themselves: what the hell is Tree, who has made a name for himself with his soul trap music, doing making a trap album? After all, he had distinguished himself by making beats that weren’t the standard trap hi-hats and synths. Why make an album of the very music he was supposed to be an alternative to?

The good news is that Tree hasn’t sold out or lost what made “Sunday School II” such a great album. “Trap Genius” is punctuated with clips of newscasters talking about Chicago’s Southside, cops arresting young African-American men, and other documents of inner city life. Tree is still using his music to comment on the life of those living in crime-ridden neighborhoods whose life is a struggle to stay out of jail or a casket.

Tree’s lyrics have always had a trap element to them, so they pair nicely with the club-ready hi-hats and swelling synths on songs like “Red Yella” and “Trap Genius.” Even more impressive are his collaborations with Blue Sky/Black Death, who do a dreamy interpolation of Tchaikovsky on “Hunnerds and Fifties.” The mixtape doesn’t have production credits, but it sounds like BS/BD were also involved in the similarly airy “New Or Leins and “Hold Up.”

Tree balances the enthusiastic raunchiness of trap with the gut-wrenching pain of soul music, often in the same track. “I grew up with gangsters/I don’t know the prayer” he raps on “Don’t Een Kare.” On “Bring This Shit Up,” he raps a list of things he doesn’t want to talk about, starting with being descended from slaves to cooking crack in his kitchen. Tree raps about money, cars, women, and dealing drugs in a way that celebrates that lifestyle and acknowledges the human cost of it. There’s desperation and pain underneath the bragging.

The tape ends with the eight-minute song “Trappers Delight,” which sounds like it samples the “Twin Peaks” soundtrack. It’s an ambitious song that is a nice end cap to the album. On the sung chorus, Tree explains the motivation behind his constant hustling:

Of course the narrator’s path to making enough money to buy it all means that the person he’s singing to won’t get the opportunity to have or be what they want to. That irony isn’t lost on Tree. “Trap Genius” may be somewhat of a sonic departure from Tree, but it still captures what makes him such a great and promising MC.