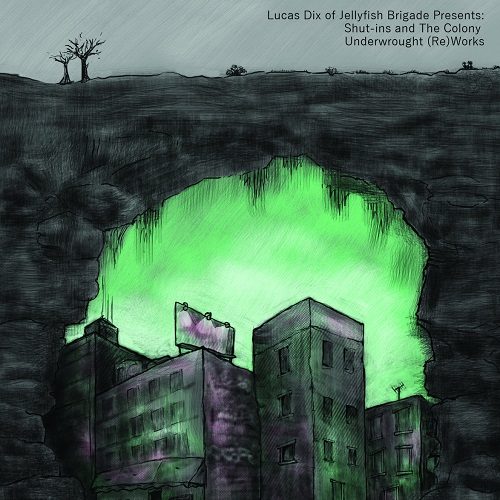 This project comes from the creative/demented mind of Lucas Dix of Jellyfish Brigade fame. This time Jeffrey Acciaoli isn’t supplying the production – though once again Dix is using the “found art” approach to making music. For those not familiar with his M.O., Dix accidentally created Jellyfish Brigade by deciding that his friend Acciaoli’s electronic beats sounded good with raps on them, and a more permanent musical partnership ensued. The “Shut-Ins” have a similar story, although this time the producer in question has a somewhat more traditionally hip-hop sound and style. Say hello to Ed Curtiss.

“Left My Bed Today (Blood In Your Toothbrush)” sounds like an anthem to depression, which may make you wonder why it’s not a collaboration with D-Sisive instead of Jay Cobb Anderson. D-Sisive would be too mainstream for this album though, and if you know the artist in question, I’m going to let that concept sink in for a minute. Other than Dix himself there’s literally not one person in the “Shut-Ins” I can identify. From the press release it’s implied that Dix simply had one monster jam session with his friends, where the only rule was nobody could leave the party until they had finished a song for the album. I’m sure it’s neither that simple nor that complex, but the truth that lies in between results in tracks like “Rerun (Shut-Ins: The Syndicated Television Series)” featuring Hives Inquiry Squad.

There’s an overarching dark and morose sound to the “Shut-Ins,” which seems appropriate given their chosen moniker, so at times you may feel like you’re listening to them recording therapy sessions. The closest you get to anything “upbeat” would be the singing on the hooks of “It Ain’t Nothing (Teleferico)” featuring Kellen Asebroek and Stephen Sauer. I don’t say “close” lightly because the lyrics are still a heavy exercise in self-actualization that could bring you down from even the biggest high.

“I’ll have my laces tied when I’m hunted down by homing pigeons
Dropping notes you’ve written from the smoky distance
I feel just like the center of the dizzy solar system
or a speck of sand – s#%! it’s hard for me to know the difference
Better late than fast, steady waiting back
I’ll be ready when I’m ready, go and meditate on that
Got an empty tank of gas and all my batteries are dead
This was never made to last and I’ll be happy when it ends”

You might get the feeling that Dix and company have spent too many sunless days blanketed by the infamous wet weather of the Pacific Northwest. This is a heavy album, but at 38 minutes long it can’t hold you down for very long. Perhaps that’s why as it draws toward its end tracks like “Why I Had to Go (Mt. St. Heartache)” featuring Hyphon, Abadawn and Sauer seem almost upbeat. There’s no mistaking the sarcasm of the title of the closer “Baby, Party On (Recession Proof)” but there’s also no mistaking the clever metaphors woven into the lyrics, with “spiders in my backyard weaving dreamcatchers” making you clearly visualize what’s being spit about. At the end of the day that’s the hallmark of a good rap song, whether it’s about Compton or Portland. “Overwrought (Re)Works” may be too dour for some and too sour for others, but there’s a countercultural (dare I say “millenial hipster”) aesthetic to it that works quite well.