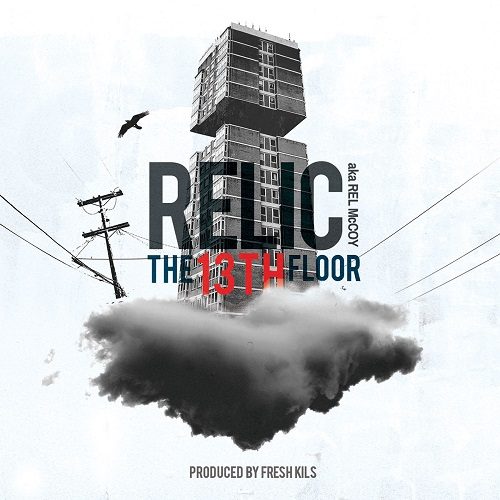 I was hooked before even pressing play by the words produced entirely by Fresh Kils. Quiet as kept Andrew Kilgour has become one of my favorite producers, and it doesn’t hurt that he’s also Relic a/k/a Rel McCoy, an rapper who started at a high level of talent and has seemingly improved from that each time out.

Unfortunately we are well in advance of the June release date for “The 13th Floor,” so there’s not a whole lot of audio clips I can share with you from this album. If I’m being honest with you the reader I’m kind of mad about that. I’m mad at myself for not having the patience to wait until Rel and Kils leaked more audio from the CD, and I’m ever-so-slightly vexed they made something this good and there’s nothing I can do but tell you it is and not show you the evidence. Fortunately there’s at least one song floating around out there I can hip you to and that’s “Breathe Easy.” It’s got a thumping bottom, razor sharp hi-hats, a xylophone backdrop, and a sung hook nobody could be mad at. The scratched in Guru lyrics at the end made me want to shed a tear and pour our a beer for the brother because he ain’t here. DOPE.

You’ll have to take my word for it when I tell you that “Breathe Easy” isn’t the exception to the rule on “The 13th Floor.” Each of these 13 tracks (appropriate) brings you to another place where you can stop, get off, and look around for a working ice machine. I kid – no actually each floor is another layer of Rel McCoy’s style and flow. Take the eighth floor for example, as he flows (and sings again) on “The Least of These” when he talks about poverty in stark terms you can see clearly: “Rain soaked, no raincoat, busted knapsack flooded with books that just won’t close.” The protagonist seeks escape in music and fiction but he’s “caught up in the clutches of a loveless home.” It hits you right in the heart.

Rel doesn’t dwell in hell though, although it certainly seems like life (and possibly the creepy demonic entity on the elevator with him) wants to go there. In fact the eleventh floor is positively uplifting as “Something About” actually manages to say something new about a fly b-girl that I haven’t heard before in a rap: “I’m strictly onto smooth cotton blend, easy access/remember how I laid the truth on you girl like a memory matress.” Niiiiiice. It’s that little extra creative flip that makes what is often an overbaked rap song concept come off fresh and tasty.

“You make that thing work – but you’re not just a skirt
Don’t let these Earthly jerks, act like they worth enough
to make a purchase girl – big eyes that only ever see
the surface of your world, tunnel vision for a trophy
And you’re only, a prize to them…”

Damn – now I’m getting mad again that I don’t have more of “The 13th Floor” to share with you. Here’s one more dope joint that’s out for the listeners though – the well named “Isn’t It Something.” Isn’t it something how Rel and Fresh Kils make what sounds like an angry elephant’s trumpet into a dope song?

Be looking out for this one in a few weeks – “The 13th Floor” is going to be worth your wait.