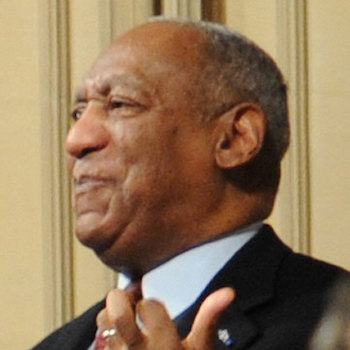 When I wrote my first op ed piece about the allegations against Bill Cosby last November, there was still some degree of lingering doubt in the air as to whether or not it was fair to accuse Mr. Cosby of such horrible misdeeds. It’s not as though it was being alleged he inappropriately patted a female co-star on the butt on a TV show or movie set. That would still be assault, that would still be a crime, but hardly compares to being told that the voice of Fat Albert and the lovable Dr. Cliff Huxtable was in fact giving women roofies and committing RAPE. At some point your brain doesn’t want to accept such horrible atrocities from such a beloved childhood icon are even possible. You start rationalizing and trying to believe that his accusers are “in it” for something, no matter how ludicrous that notion really is. The cartoon from Matt Bors seen below literally illustrates the fallacy of that argument. (All credit to Matt Bors and to Alternet.)

Exactly. What real benefit is there for a woman to accuse a powerful and influential man like Bill Cosby of rape? None. Whether you can prove it’s true or not, you’ll be shamed and ridiculed in the court of public opinion, and if history has taught us anything it’s that trying to blackmail Bill Cosby for large sums of money is a bad idea. Well it’s a bad idea in general anyway – it’s also criminal – much like RAPE. While much of what’s out there in the realm of public discourse will never amount to much in the way of actionable charges against Mr. Cosby in criminal court due to the statute of limitations, Judge Eduardo Robreno changed the landscape of the discussion entirely. By unsealing court records in a case that was ultimately dismissed, he revealed that in a court deposition (which is sworn testimony and legally binding as the truth in a criminal case) he ADMITTED to buying drugs to give to women before sex. This is in stark opposition to Cosby’s repeated assertions that the allegations against him are baseless. A lot of Cosby’s biggest supporters quickly changed their minds about his innocence, and President Obama (himself a lawyer) had a few things to say on the subject.

Judge Robreno explained why he unsealed the court records from the dismissed case: “The stark contrast between Bill Cosby, the public moralist and Bill Cosby, the subject of serious allegations concerning improper (and perhaps criminal) conduct is a matter as to which the AP – and by extension the public – has a significant interest.” And he’s absolutely right. As Hannibal Buress has already addressed, it’s the height of hypocrisy for Bill Cosby to talk down to young black men about their alleged moral failings when he himself has gone on the record (again in a sworn deposition that is legally binding) as buying date rape drugs with the intent to have sexual relations with women who ingested them. That’s RAPE. Hannibal Buress says so. President Obama says so. Any person with a functioning brain and the capacity to speak or write the words down will say so. It’s RAPE. Drugging a woman and having sex with her against her will is RAPE. I shouldn’t even need to repeat this but we can’t just let Mr. William Henry Cosby slide on this!

The fundamental dichotomy we’re dealing with here is that even a rational brain can try to explain away “the consistency of the stories” as mentioned in the video clip above. Instead of it proving that 50 women were raped by Bill Cosby, some people can actually rationalize that it means all 50 of them “got their story straight,” although again as the cartoon above pointed out WHAT WOULD THEY GAIN from all falsely accusing Mr. Cosby of rape? The reason this hits home to me this week is because the second season of BoJack Horseman was released this weekend. While it’s a really good show and I’d encourage you to watch it, all you really need to know for this editorial is that it’s a dark comedy starring Will Arnett as a former sitcom actor struggling with his identity in the last place in the world you’d want to have an identity crisis – Hollywood. The “Hank After Dark” episode could not be any more clear as to what it’s about as “Uncle Hankie” is a replacement for the very man editorialized here, in an attempt for the show’s creators to reveal what happens when you accuse a famous and powerful celebrity of misconduct. Friends turn against you, critics accuse you of being jealous of the celebrity or just wanting your own name in the spotlight, magazine editors say that “the public” doesn’t want to hear it when in reality they’re being pressured not to ruin the star of a media conglomerate they’re a part of, and then just to rub it in our faces “Hank” meets his accuser in a parking garage and tells her she’ll never prove it because “everyone loves Uncle Hankie” so she should just shut up and go away.

I did say this was a “dark comedy” right? It’s dark. Very, very, dark.

The bottom line is we’ll probably never know what Bill Cosby actually did or didn’t do in 50 different cases with 50 different women (or more). We have his sworn deposition that he’s a scumbag, but no criminal charges were filed, so in that and in (at least) 49 different cases he’s going to get away with what he (allegedly) did. The only thing that’s really changed here is that much like Whoopi Goldberg, there was a point at which I could give Bill Cosby something resembling the benefit of the doubt since he’s never been prosecuted or jailed for any of the things he’s accused of. I already had a bad feeling that Dr. Huxtable was not the man I admired as a child though, and as an adult I need to divorce myself of those affectionate feelings once and for all. That’s not a tragedy for me at all. It’s a tragedy for the man who fell from grace after reaching the highest levels of prestige and honor by his own actions. The consequences are his canceled TV shows, canceled comedy tour dates, and the general knowledge that he’s a hypocrite. Other than that though he’s still a millionaire and will still live out the rest of his natural life in the comfort of his wealth and self-denial. Much like “Hank After Dark” points out, you can’t beat Bill Cosby, but you can at least admit he’s not the man you thought he was – and he can never get that respect back. I’ll never watch “Fat Albert” or “The Cosby Show” ever again.