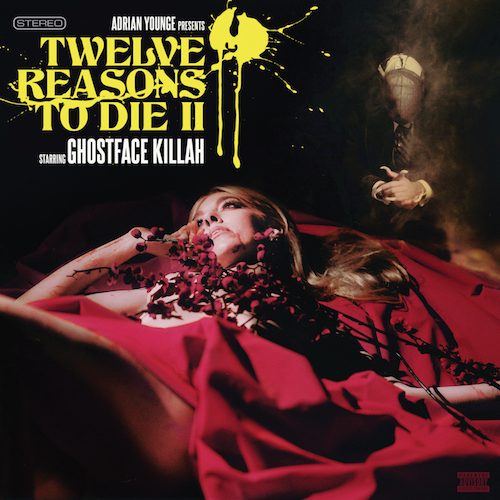 In 2013 “Twelve Reasons to Die” was my favorite hip-hop album of that year. With live instrumentation courtesy of Adrian Younge, the Ghostface Killah created a hodgepodge story composed of the mafia, romance, assassins, murder and supernatural revenge. The following year, he decided to release another narrative hip-hop concept record entitled “36 Seasons”. The album’s plot was also a revenge story, but set in the NYC criminal underworld. After listening to it, the thought occurred to me that both the album and its predecessor can be considered narrative anthologies, urban musical equivalents analogous to live-action anthological series such as “American Horror Story” or “True Detective”. What ties both albums together is the stories have different circumstances for Tony Starks’ transformation into the Ghostface Killah. As such, one of my expectations was that his next album would contain the recurring story in another incarnation. That expectation was shot down since “Twelve Reasons to Die II” is actually a direct sequel to its 2013 original.

I knew that the album was slated for release, but there was barely any promotion for it and there were sparse physical copies available on the day of release. I managed to find one and packaging was that of a slip cover as opposed to a jewel casing, which I found to be slightly peculiar. It’s also worth noting that the release of this album was during the same time that Ghost aired out Action Bronson for statements he made on ESPN (free promotion, perhaps?). But no matter his means of raising awareness for the album, “Twelve Reasons to Die” is slightly more entertaining than the original. The first album was basically his origin story, the sequel is where the fun really begins.

The first official song “Return of the Savage” features Raekwon. Though the Chef appears on most the album, it’s here where his 20-plus years of artistic chemistry with Ghost is really on display:

To give a quick recap of the original album, Tony Starks was killed but his remains were pressed into 12 vinyl records. Playing the music on the vinyl resurrects Starks’ spirit as the Ghostface Killah. This time, he’s in New York City in the 1970s and meets with Raekwon’s character, Lester Kane, who’s trying to oppose Starks’ former group, the DeLuca crime family. The next track, “King of New York” is a different flip on the term since it has nothing to do with the Big Apple’s most dominant rapper. In terms of the story, it’s about Raekwon’s character wanting to rise to the top of the NYC mob scene. Younge’s production on the track is reminiscent of the Blaxploitation and vintage R&B samples that the Alchemist used all throughout Prodigy’s 2007 release “Return of the Mac”.

“Get the Money” also has a throwback feel to both the production and Ghost’s flow. If not for Vince Staples having a guest verse on the track, I would think that the song is a re-make of “Daytona 500”. The one track that qualifies as a posse cut, “Death’s Invitation”, sounds good only on paper. Featuring Scarub, Lyrics Born, and Chino XL, you’d think they’d all come correct even within the album’s parameters. But the beat is too off-kilter which makes the guest emcees flow and lyrics sound noticeably choppy and off-beat. Ghost is the only one who sounded right on the song and he did the first verse as an a cappella before the beat dropped. The storyline starts to take a few twists beginning with the interlude for “Let the Record Spin” and ending with the album’s closer, “Life’s a Rebirth”.

Despite being a concept album, it clocks out a just under thirty-two minutes. It kind of left me craving more, but Ghost is like Eric Roberts in that he can do so much with just so little. He and Raekwon still maintain their rapport when getting into lyrical character as two kindred criminals. The RZA provides the narration in some of the album’s interludes so that even the most ardent listeners can still tie the tracks together cohesively. Adrian Younge’s production style melds vintage soul with live instrumentation and succeeds on most of the tracks, especially the ones where Ghost’s character has certain extremes in emotions. The album succeeds in granting an audio interpretation to something that’s showcased more prominently in a cinematic medium. Considering the cinematic connotations, the urban gothic aspect and the revenge plot, “Twelve Reasons to Die II” is what 1989’s “Johnny Handsome” would’ve been if it was an Afro-Americanized with elements of a ghost story thrown in.