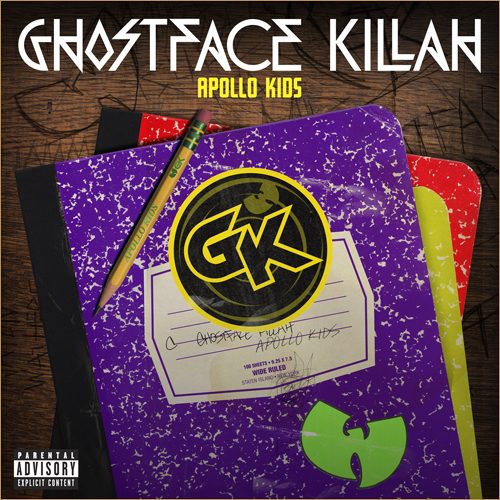 If the title of Ghostface Killah’s ninth studio album seems familiar and you find yourself catching deja vu, you’re not crazy – you’ve heard “Apollo Kids” before. The difference is that originally “Apollo Kids” was a slammin’ single off the seminal classic “Supreme Clientele.” The duet between Ghost and Raekwon also featured a visually memorable video where the ostensible CEO of Starks Enterprises further distanced himself from his comic book namesake, owning and operating a factory which indulged a fetish for sneakers rather than weapons of warfare.

Over a decade later Ghost has resurrected the “Apollo Kids” name, which would lead one to expect he’s trying to recapture that sound and vibe of an all-time hip-hop classic. Some would argue that’s a needed move after the somewhat disappointing vibes of “Ghostdini.” On the other hand when it comes to delivering year in and year out Ghostface is one of the few Wu-Tang members you can count on, and he’s delivered more hits than misses since dropping his first solo album back in 1996. The artwork may speak more strongly than the choice of album name in this case, particularly since Ghost can’t be seen anywhere on the cover. The impression one gets is that the popular Wu rapper went “back to school,” complete with his wide ruled looseleaf and a #2 pencil. Whatever other images he may have, ranging from internationally dapper don to hardcore Staten Island thug, the one he wants you to identify with is top storyteller. The Scram Jones produced “Starkology” makes that mission perfectly clear:

“Y’all respect my tour bus
We got whores with no drawers ready to do all four of us!
Wildin, bustin big bags of Ruffles
Show money, rubber band’d up in the duffle
With dirtball niggaz that steal cake from stores
Boostin niggaz that pop tags in the mall
True spot hoggers, used a few stockings
Niggaz hand over the cash when heat’s to they noggin
I sing a lil’ lullaby, who gon’ testify
the way a gruesome murder been televised?
Stupid! My name still ring in the streets though
Eighty-six, used to slip crack through the peephole
[…]
This verse is like leavin the gas on
Hog-tie a nigga for his bread, have the Hefty bag on”

Despite the humorous use of a Tears For Fears sample by Jones, there’s no doubt Ghost is deadly serious when he warns other rappers “just watch next time how you write your words” and promises to leave inferior emcees hanging like “an old man’s nuts that sag with no shame” all while vowing that “payback’s a bitch, yeah I smash y’all berries.” It would be hard to say this is a return to form given that in my opinion Ghostface never fell off, but the passionate intensity of his delivery on this spartan track is hard to ignore. After all Ghost is so amped up he vows “I can do this on crutches black with no legs/both arms in a sling, push me on stage/Style still linger in the air like Glade.” It’s a tour de force for Ghost, reminding us all why he’s one of the most cinematic rappers in the industry, painting pictures with his words you see in your mind’s eye like a Hollywood blockbuster.

Long time Wu-Tang fans may be disappointed to not see RZA’s name anywhere in the production credits of the twelve tracks here, but they really shouldn’t be. In truth he hasn’t really been necessary to the success or failure of a Ghostface album for a long time now, let alone any other group or solo release involving the Wu family. Speaking of the family though, there’s no shortage of Clan members getting down with Ghost. Frank Dukes produces three solid joints on this album and two of them are Wu collaborations – GZA and Killah Priest blessing the slick R&B piano and melody of “Purified Thoughts,” while Cappadonna and Trife Diesel take a trip with Ghost to Mexico on “Black Tequila.” The third Dukes track? That’s a surprising but pleasant duet with The Roots frontman Black Thought called “In Tha Park,” a song with the heavy overtones of a gritty detective TV show that has both rappers paying their respects to the hip-hop’s “power from the street lights made the place dark” roots. You can also hear Raekwon, U-God and Cappadonna on the Anthony Acid laced “Ghetto,” while Meth and Rae join Redman for the slamming Jake One produced finale “Troublemakers.”

As shown by “In Tha Park,” Ghost doesn’t limit his love for fellow emcees to just Wu familia. Some of the collaborators would be expected, like Busta Rhymes rapping with Iron Starks on “Superstar,” but a few eyes may be opened when The Game and Joell Ortiz show up on “Drama” or Jim Jones joins him on “Handcuffin’ Them Hoes.” With only three tracks out of 12 riding completely solo (including the superb Pete Rock joint “How You Like Me Baby?”) some naysayers will complain that Ghost became a bit player on his own album. Thankfully the boastful lyrics, strong personality and impeccable delivery Ghost has crafted in the last two decades keep him from being lost in the mix. While this writer wouldn’t call it a comeback since he’s been here for years, those who have felt something was lacking of late from Ghost will no doubt find what they’re looking for here. “Apollo Kids” represents the Wu’s most popular MC well going forward into a new decade.