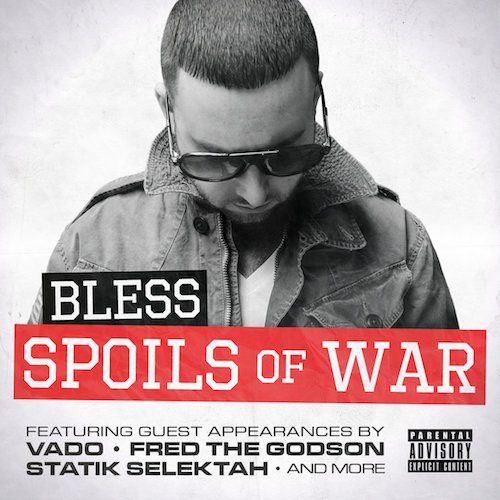 The hype machine behind Bless is roaring down A-15 at high speed, coming straight outta Montreal, Quebec, Canada to the United States. Guest appearances by Vado, Fred the Godson and Statik Selektah ensure the delivery will be well received in the state of New York, and along much of the East coast. Once it meets up with I-87 the wait at the border shouldn’t take long. The 18 wheeler is examined, the driver is questioned, and that cargo full of “Spoils of War” compact discs will continue to be exported far beyond his French speaking province.

The funny thing is Bless sounds as American as me, almost indistinguishable from a New York rapper. The attached bio goes out of his way to promote his Canadian heritage and contains bold proclamations you have to question at face value such as “the most important rap CD to emerge from Canada.” I think everyone from to Dan-e-o to D-Sisive to the Swollen Members and more would have an objection to that statement – but I digress.

There’s nothing inherently Canadian about Bless, and I mean no offense to dude, but I kept waiting for an obscure reference that only residents of Canada or citizens of Montreal would get – and instead he’s rapping about renting cars from Enterprise and Avis. What? “Pop Off” is good especially with Statik Selektah blessing the beat and scratches, but tell me how tracks like “These Streets Don’t Love You” featuring Alan Prater couldn’t come from any reasonably decent white rapper from Pittsburgh, Baltimore, Denver or Providence. Given he drops Biggie references he could even be from Brooklyn or Bed-Stuy.

On “Paid the Price” Bless refers to his style as “American dreams, Canadian schemes” and I think it’s telling that it’s not the other way around. I searched hard for the distinguishing characteristics in nearly 40 minutes of “Spoils of War” and was instead met with samples of Nas (“Luxury Rap”) and Jay-Z (the album’s title track). I’m dead ass serious. It’s like when Maestro Fresh-Wes once said “Naah, Dis Kid Can’t Be From Canada?!!,” only Wes (another Canadian rap legend) was trying to show haters South of the border that he belonged and was just as good if not better than many American rappers. I don’t get that feeling from Bless at all. He blends in like he was a naturalized U.S. citizen and never once had free health care.

The thing is Bless isn’t bad, but he isn’t great either. His punchlines seem pretty basic – “Flow militant, y’all can call us the Navy/roast competitors, they +Ghost+ like Swayze/all I do is get bread – ‘Hasta la vista baby.'” He tries to say he’s “literally the shit” but I’m going to do him a solid and take that figuratively instead. I don’t hate “Spoils of War” but I honestly can’t recommend it highly either. There’s nothing unique about it on either side of the border, no matter how fast that 18 wheeler full of hype barrels on down the road toward Plattsburgh.