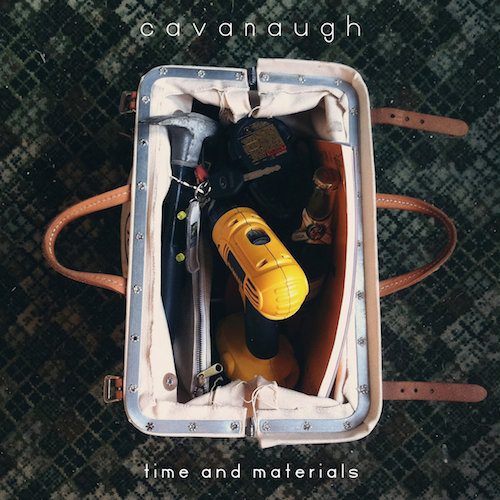 What do you get when you combine Open Mike Eagle and Serengeti? You get Cavanaugh, a first ever collaboration between two artists who have known each other since they went to school together at Southern Illinois University. (Go Salukis?) The question one might ask is why they haven’t done it sooner. The question I might ask is why I’ve known Serengeti longer if they were in school at the same time. He’s been on my radar since 2005, while our first OME review was three years ago. To be fair though Patrick does state in his review that Eagle had been on the scene since at least 2007.

It won’t take you long to get to know Cavanaugh, and not just because the two have plenty of exposure to fans of independent hip-hop, but because the whole of “Time and Materials” takes 26 minutes. It’s an album produced entirely by Eagle, and his musical sensibilities fit the experimental and disaffected vibe of the album. Songs like “Pinky” are a deliberate middle finger to trying to get a leg up out of the underground.

“Practice my whimsy, become the next Herb Dean
Sometimes in rappin man you start to lose steam
Plane trips and towns don’t seem as interesting
After night’s over you start to ask yourself some questions
Green bean, the spinach green, burnt eyes – lurker
Them cats got the women
while you at the crib blendin into a bed-berserker
Merchant, the whole thing, I ain’t got a job and I ain’t really workin”

Does it seem depressing? Maybe it is. So is the conceptual story behind the album – an apartment building where luxury condo owners and section 7 housing exists side by side under government decree. The residents from each side of the economic divide don’t speak to each other and exchange angry glares, and only the maintenance men (“Mike” and “Dave”) talk to each other. You can see this play out on “Screen Play” as the two sit at the bar and put down drinks while they discuss their sad lot in life.

“I might lose it, truly let go
Kick the train door and sue the Metro
Buy new software and do electro
and start to feel weird cause I’m too successful
Buy my book though – buy my house
I’ll clear out next week and fly right out
Book it now my funds are unstable
Ain’t no books hidin under that table”

You might just want to prescibe Mike and Dave some antidepressants when you hear lines like “I went to sleep sad/I never met my foster dad/He was always gone away from foster mom/but that gave us time to get close” on “Wonder Girl.” This album IS the prescription though. Whatever negative feelings that Mike or Serengeti have are channeled into this album, which makes the conclusion of naming the final track “Lemons” obvious. This is them taking life and making lemonade out of it. It spills over the pitcher with pop culture references to Lex Luger and Akebono, while still maintaining its dark sweetness with lines like “I never seen my mom and pops together/they had a relationship and I am its fossil record.” Maybe the duo doesn’t seem outwardly happy at first, but you don’t get the feeling there’s a bullet in the chamber and a barrel on the tongue either. “Time and Materials” is therapy for the protagonists, perhaps for the rappers themselves, and most oddly of all for the listener too.