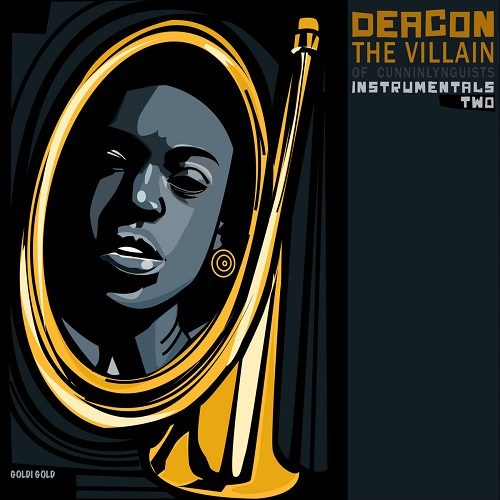 Reviewing this one was an easy choice. I already thoroughly enjoyed the first “Instrumentals” volume from Deacon The Villain, well known for his membership in the CunninLynguists crew but a formidable producer both in-and-outside that collective. In my head I had already started writing this review back in October, but life as it often does got in the way.

In the entertainment world, particularly the insular breed that can be found in Southern California, they often refer to the nebulous “It Factor” when it comes to being a star. If you try to quantify it in more concrete terms it comes down to having a charisma that attracts people to you, a look that a majority of the audience finds pleasing, and a clever way of engaging said audience. For producers there’s an even more nebulous “It Factor” too that writers are constantly trying to quantify. You know it when you hear it – DJ Premier, Alchemist, Tyler, the Creator, Polow Da Don, Pete Rock, et cetera.

Deacon is cut from their cloth. His tracks have that hypnotic aural quality that make them suitable for consumption with or without an emcee. It’s not just the elements he samples (or manufactures himself), it’s not just the way he combines them with perfect timing over beats, it’s not just the way he changes things up instead of finding a loop and sticking to it, it’s all of the above. His N.W.L. track for “Rip the Guts” exemplifies the things that put him in a different stratosphere. The song seamlessly makes transitions from hardcore hip-hop to headbanging heavy metal and could easily satisfy fans of either, but definitely caters to rap expectations in it’s structure. The track “rips” like no other.

It may be possible to understate how much of the “It Factor” Deacon has, but I’m not convinced it’s possible to overstate it. His songs capture moods and fit the artists they are meant for perfectly. You don’t even have to hear Mr. SOS on “Tired of Living” to get what was going on here – rapping about losing his furniture, his family, and feeling so despondent that suicide seems like a reasonable option. The gospel choir, the somber piano keys, the air of gloom all wrap around you like a snug coat – and yet it’s so beautiful that it’s uplifting even amongst the sadness. Sometimes you just have to embrace your inner blues, and “Tired of Living” does that cathartically.

Singling out individual tracks to praise is an exercise in depression itself. For every song I reach out to specifically talk about, I feel like I’m doing an injustice to one of the other gems here. I could rave about the gritty and dirty feel and horny horns of Natti’s “Bright Lights Big City” and bemoan the fact I didn’t praise the softly strummed guitar rhythms of JustMe’s “Truth and a Lie.” I could tell you about the Jimi Hendrix meets Herbie Hancock meets Dan the Automator amalgamation of “Still Motion” and completely neglect the easy and breezy sound of the previously unreleased “Keep Pushin’.” If you put these tracks on a dartboard and blindfolded yourself first, you’d still hit gold with each point that connected.

Take it from me – “Instrumentals Two” is free – but you’ll want to pay him for it.