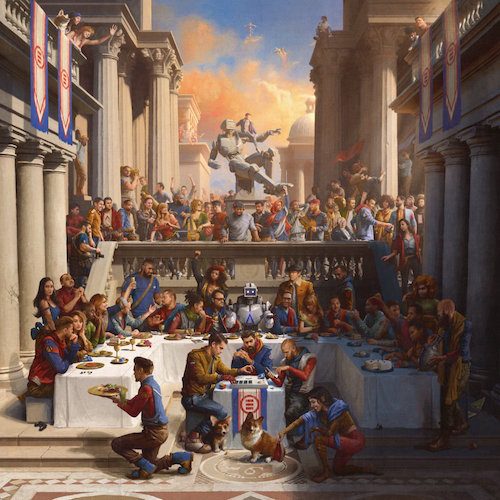 Sir Robert Bryson Hall II (b/k/a “Logic”) is an admitted movie buff. It’s an activity that has seeped its way into his raps and influenced how he conceives of the ideas for his full-length projects. His sophomore album, “The Incredible True Story“, was a sci-fi space epic with cinematic raps about humanity’s destructive nature and a subsequent search for nirvana. Even the album’s cover seemed to be inspired by the poster for the 2004 Wes Anderson film, “The Life Aquatic with Steve Zissou.” His third album, “Everybody”, is also a concept album. It’s one where the raps frequently recount his experiences with racism as a biracial man in America while juxtaposed with a plot in which a protagonist is having a conversation with God. Logic takes a panentheistic perspective of the higher power, shining a light on the inclusive meaning of this album’s title. Although there have been rappers before who have made whole songs of a rhymed chit-chat with the Almighty or some abstract concept personified (Cam’Ron, DMX, and Copywrite all come to mind), Logic expanded that idea and applied it as non-rhymed vignettes of dialogue throughout the album. It’s like he read some of Neale Donald Walsch’s “Conversations with God” books and gave it his own treatment.

However he chooses to create his albums, both Logic’s talent as an emcee and his insightfulness can’t be denied. The first track, “Hallelujah”, is an intro more than seven minutes long. More than the rapping is the skit at the end. Remember that dialogue with God that I mentioned earlier? Well, this is where it starts. Atom, played by radio personality Big Von, is suddenly killed and his soul lands in Purgatory. While there, he encounters God, played by noted astrophysicist Neil deGrasse Tyson. In a very humorous exchange, Atom learns of his death and of his wife’s infidelities. This portion of the album picks up later, but the gist of it often manifests through Logic’s lyrics. For the soundtrack, Logic enlists his longtime in-house producer 6ix for most of it. 6ix has a certain versatility to his sound. He can swiftly go from cinematic like “Hallelujah” to a club-friendly bounce on “Killing Spree.” The song’s chorus chant of “ass, titties, pussy, money, weed” initially indicates what one would readily identify as a celebration of materialism customary to hip-hop, but it applies Logic’s theme of dichotomy on not just race, but also on the person and the happenings in the world around him. The topic is well-executed with lines like “everybody looking for the meaning of life through a cell phone screen” and with Logic adopting a chopper flow ˆ la Tech N9ne. His personal lyrics really started to grab my attention on “Take It Back.” Though comprised of only two hooks, one verse, and an autobiographical outro, it’s a song that any mixed-race person or suburban-raised person of color can relate to.

With all his first-hand commentary on race, Logic takes it one step further on “America.” A posse cut featuring No I.D., Big Lenbo, Black Thought, and Chuck D., this is one of the few times that Logic has gone polemic with political raps, even interpolating a few Nas lines to start his verse off. It’s also noteworthy that Black Thought and Chuck D. are included on this one seeing as how, along with Logic, each emcee represents a different era in the history of seminal hip-hop label, Def Jam Recordings. Though Logic corners nearly every room of this track, it’s Philly’s Black Thought who has the best verse of the song:

The shortest track on the album is “Ink Blot.” While it has atmospheric psychedelics that make the beat interesting, it’s the weakest song on the album. Three 6 Mafia’s Juicy J should’ve had his own verse on here instead of being relegated to tag-teaming rhymes with Logic and touching off with “slob on my knob.” Atom’s talk with God is continued on the aptly-titled “Waiting Room”. It’s basically a skit over four minutes long using Logic’s conception of God and reincarnation to explain the plot of the album. You know those chain-messages that you see perhaps more than once a day on social media newsfeeds about suicide hotline numbers? Logic tackles that heavy subject on “1-800-273-8255.” It’s a morbid topic, for certain, with Logic rapping from the perspectives of both someone on suicide watch and a counselor. But despite the gloominess, there’s a glimmer of positive hope in the song to not give in to despair.

Logic has made no secret about his own personal issues with anxiety and how he copes with it. On his debut album, the song “Nikki” sounds like a bad relationship, but it’s actually an extended metaphor for using cigarettes to cope and his addiction to nicotine. On this album, “Anziety” has a message on mental health better than any of those pharmaceutical drug commercials. His emceeing is at its best on “Black SpiderMan”. Using his quick, multi-syllabic flow, the message that he has for Everybody is to love and accept themselves as they are:

“AfricAryan”, the original controversial title for this album, is used as the penultimate song. Another track about his failure to achieve acceptance from Black and White people, it contains Logic’s wordplay, unflinching admissions about the contradiction of his mother having mixed-race children but being a racist herself, and his search for a beautiful state of mind:

“I feel the Aryan in my blood, it’s scarier than a Blood
Been looking for holy water, now I’m praying for a flood
It feel like time passing me by slower than a slug
While this feeling inside of my body seep in like a drug”

The title track ends the album and concludes the conversation between Atom and God. The message? You’re not complete until you’ve been in Everybody’s shoes. As an emcee, Logic shares much in common with his peers in contemporary rap. But the one thing that separates the Maryland emcee is that he doesn’t share their need for overindulged vices and making meaningless songs. Despite his relatively young age, he’s had the drive of a rap industry veteran for a while now. His positive messages on this album may sound like half-assed platitudes to some, but his extensive experience with doubt, alienation, and negativity have led him to speak those messages. The fact he’s an emcee of honed skill only serves to garner more interest in those messages.