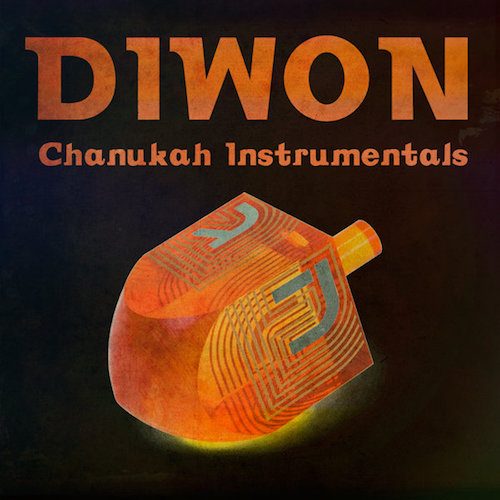 Every year in December I find myself drawn to writing about whatever Christmas themed albums I can find, but it occurred to me this year that there’s more than one religious holiday that gets celebrated in December. You can easily find Christmas rap albums if you go looking (be careful if you do – they’re not all good) but what about Chanukah rap albums? Surely there had to be some and I was just ignorantly not aware of their existence. After pondering this for a while I stumbled across what I was looking for – an album of instrumentals from Diwon – from a label you’d expect to provide us Chanukah hip-hop – Shemspeed Records. To date their most famous export is Kosha Dillz but we’ve reviewed a few Diwon releases from the label over the years.

There’s virtually no rapping on “Chanukah Instrumentals,” which given the title is what you’d expect, which is why Diwon caught me completely off guard in the middle of the humorously titled “Dr. Dreidel.” It’s the only time you’ll hear anybody bust a rhyme unless you loop these instrumentals and make your own holiday Chanukah raps, but the moment comes and goes so quick that if you don’t hit pause and back the track up to 1:05 you might just miss it altogether.

“Whoa! Just brush it off, told ’em how I felt
Place your money where your mouth is, showin the gelt”

That’s pretty clever really given that gelt is a double entendre here which refers to both the small sums of money given to children during the holiday season AND to the chocolate coins which also serve the same purpose. These same coins can also be lost in a simple game played with the dreidel, each spin signifying whether add a coin to the pot, take one out, take half or do nothing and pass your turn. You don’t have to take my word for it – I looked all this up to confirm it since I’m not Jewish – but this is one case where “put your money where your mouth is” could actually be quite delicious.

Unfortunately just when I was starting to get into the vibe that Diwon was putting down on tracks like “Sivivon” and “Al Hanisim” the album came to a quick end. That’s doubly ironic given this will wind up being the highest scored Diwon release on RapReviews so far. His work as a producer may have been a little overlooked or underrated, but it’s hard to say given Shemspeed’s own Bandcamp page and their Wikipedia entry don’t show any new albums since 2012. That being said the label’s homepage is still active although curiously parts of it (such as the store) still say “under construction.” It’s hard to judge where they’re at now without more output, and it’s equally hard to judge whether there will BE more, but if anybody’s going to give us Chanukah raps it’s Shemspeed and Diwon.