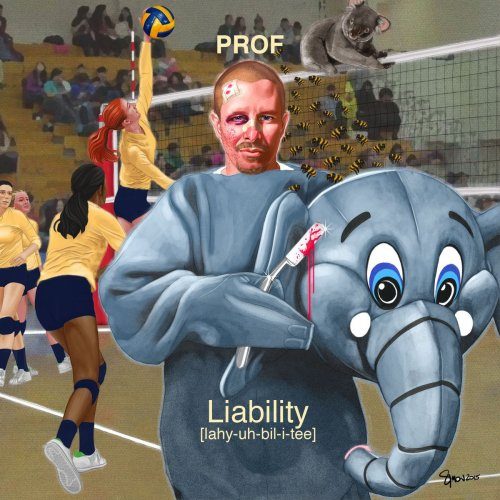 There are a number of German entries in the English lexicon, older ones (wanderlust, weltschmerz, wunderkind) and newer ones (the uber- prefix). Traditionally compound words (schadenfreude and zeitgeist being two of the most persistent ones) are more likely to find their way into the (American) English vocabulary because they seem to be able to express a complex Sachverhalt – pardon, situation – in a single word.

The highly common combination of terms makes it relatively easy to coin new words in German. Fresh creations emerge all the time and, when catching on, are soon in widespread use, like recently Willkommenskultur (‘welcoming culture’), which describes the open arms with which German civil society has welcomed refugees. Popular for some time now has been a word that makes a negative statement – Fremdscham (noun) or fremdschÃ¤men (verb). When you experience Fremdscham (‘external shame’), you feel embarrassed by another person’s actions. Specific to Fremdscham is the feeling of embarrassment on behalf of the individual who embarrasses himself but is unaware of the embarrassing circumstances.

The term likely appeared in the days of trashy TV (also known as Unterschichtsfernsehen – lower-class television) and gained traction with viral internet videos. Where once we were only ashamed of people we had a connection to (individual members bringing shame to the family), public exposure, ridicule and humiliation have become a form of entertainment that is inescapable these days and requires us to come to terms with our feelings by finding new words for them. But while the *facepalm* is a similar social media reaction and ‘Awkward’ even became the name of a teen TV show, English equivalents of Fremdscham (vicarious/empathic/proxy embarrassment) haven’t become the standard response German-speaking young people give when they see others make a fool of themselves.

Fremdscham has also naturally entered hip-hop parlance in Germany, which is understandable given how certain variants of rap are liable to cause embarrassment. So the ‘Fremdscham’ verdict is often not far away in the reception of the latest trends and stunts. The question is, is it justified when the culprit acts on purpose, when he consciously puts himself in an embarrassing situation but doesn’t feel the least bit of shame?

Minneapolis rapper Prof explains the title of his latest, “Liability,” with the following definition printed on the CD sleeve: ‘A person or thing whose presence or behavior is likely to cause embarrassment or put one at a disadvantage’. Since a number of rappers fit that description, Prof must have decided to play the fool more convincingly than others. Sarcasm aside, the ability to provide comic relief is part of Prof’s appeal, and not only is he potentially part of a noble lineage of endlessly entertaining rap legends, the vast majority of rappers worth remembering walk in fact the line between serious and not so serious.

Although capable of serious moments, Prof has branded himself as an oddball for much of his career. “Liability” is already 14 tracks deep when he clears it all up on “Permission,” defending his lighthearted antics as a deeply personal decision. “I don’t need permission to smile,” he croons the chorus with an appropriately defiant tone, but during the verses he doesn’t fail to drive the point home with arguments in traditional rhyme form:

“I won’t apologize for bein’ positive
I’ll no longer explain myself to novices
So pardon me if I wanna crack a joke
Rather than sit around and point at holes in my boat
Put it on my grave that I went out laughin’
Dancin’, only way to celebrate the madness
[…]
Should I be more pessimistic, less misfit?
If I refuse to comply I’m a dipshit?
If they’re mad at you then that’s a good sign
They’ll do anything to keep you from a good time”

“Permission” is also the track most reminiscent of Rhymesayers flagship Atmosphere with Ant providing the beat and Prof’s reflective and rebellious stance recalling Slug. But despite “Liability” being Prof’s Rhymesayers debut, he doesn’t follow in Atmosphere’s footsteps, even though, as “Permission” suggests, Slug and Prof evidently share some of the basic premises that turn regular dudes into rappers.

On that account it would be completely unfair to expect Prof to backtrack on “Permission” and deliver more ‘thoughtful’, ‘mature’ content. The problem is that being the opposite – ‘carefree’, ‘immature’ – doesn’t exempt an artist from exerting his craft to the best of his ability. If only that were the case with “Liability.” The album is off to a very bad start with a first third that is totally lame on all levels. For five tracks straight you basically get a sequence of bleeps, sounding like bad parodies of ringtone rap circa 2006. I give the man credit for not willingly engaging in parody rap, but that doesn’t make his court-jester-parading-as-king act any better.

Surely he’s thrilled to have Tech N9ne and Petey Pablo on the record, but why serve them Fisher Price beats? The production remains invariably silly for these first tracks, not even the frequently engaging singing being able to provide relief. The first track to get it right is ironically scored by veteran Aesop Rock. “Bar Breaker” sounds the part with a roaring fuzz bass and clean, hard-hitting drums as Prof displays his vocal dexterity in a manner that puts him up there with some of the most versatile MC’s. Starting off on a ‘bars’ double entendre, he goes on a rapping spree filled with pop culture references, libidinous boasts and self-mockery, stopping abruptly with the matter-of-fact conclusion “I’ve tried bein’ humble – it’s just not workin’ out.”

From here on “Liability” has a better grip on rap entertainment. Curtiss King’s production for “Church” and “Mob” pretty much nails the pre-trap fun days when producers like Timbaland and Jason ‘Jay E’ Epperson ruled the airwaves. “Apeshit” would also work without Big Chocolate & DJ Two Stacks’ faint dubstep cues and the Waka Flocka Flame feature, but doesn’t suffer from them neither. “I Had Sex in the 90’s” has the attributes of contemporary R&B but humorously remembers a time when “knockin’ boots meant somethin'” while acknowledging, “If you think about it, that’s a long time.”

The second half of the album points to a hidden strength of Prof. Singing. Or rather – not rapping. With “Motel” and “Cloud 9” he gives in to the temptation to sing a simple song in good old folk and pop fashion. Afrobeats and Chickenbone provide earthy tracks that possess a modern-day blues-meets-pop quality, and Prof sings passionately about lows and highs. Passion is also an ingredient to “Love Like Mine” and “True Love,” although one of a darker hue, presenting him as an obsessive lover willing to cross any line. Also the recurring theme of fire appears in “Gasoline,” which serenades an explosive relationship. Excellently set up with a background choir, it’s one of the few songs that are sufficiently emotionally complex.

So, does Prof give us any reason to feel ashamed for him? Not really if you’re familiar with rap music, and even less if you’re already familiar with Prof. Fremdscham specifically is out of the question. Rap has always been very self-aware, and Prof is no exception. Acting a fool isn’t the same as being one. Not to mention that recklessness is often rewarded in rap. Still there’s a risk. Part of Prof’s strategy is to make a spectacle of himself. But he’s at a stage where if he doesn’t up the ante people are going to move on to the next sensation. For now at least he’s not in a league with rap entertainers that possess captivating personalities and rap mastership in equal masure. Him breaking the fourth wall with “Permission” is necessary, but it has no influence on the quality of the rest of the tracks. They have to stand on their own, and more often than not they don’t.