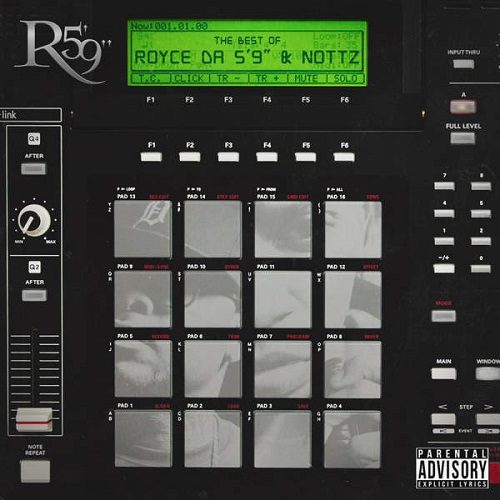 “Lost Files” is nothing more than a collection of Royce Da 5’9″ tracks that all have Nottz on production. Excluding DJ Premier, Nottz was responsible for many of the stronger songs on Royce albums. These tracks were usually huge, thumping affairs that lit the fire under Royce before and during the latter half of the 2000s, when Royce shrugged any association with Eminem off, and laid claim to being the best rapper in the game. At the time, I agreed with this sentiment, and still believe “The Bar Exam” trilogy showcase an emcee rapping out of his skin, which continued to less effect in super-group Slaughterhouse.

At 9 tracks, “Lost Files” isn’t the biggest piece of detective work that’s been undertaken, but it’s a handy collection of the better tracks from some of Royce’s more obscure mixtapes that posed as albums. The first track (“Promise Land”) is from a confusing record itself, 2008’s “The Album” which was put out between the first two “Bar Exam” mixtapes but is rarely considered a genuine LP in Royce’s canon. It was mixed by DJ Green Lantern, but this version is the original and it’s got that epic feel some of Royce’s best work has (“Buzzin'”, “Danger (We’re Live)”). I know PRhyme was a great piece of work with DJ Premier, but a Nottz/Royce project would be just as rewarding given the chemistry the two have.

“Watch Me” and “Take You There” are lifted from the digital EP (that’s hard to locate these days) called “The Revival” which sneaked out in 2009. The former is a ridiculously cocky, yet equally funny example of Royce’s unstoppable flow that was in full force that year; the latter is a more sombre collaboration with Nottz that sees the Detroit fire-spitter seducing another man’s woman. Lines like “Your mother wants to kill me, but your father gon’ feel me” seem backwards but are just as likely to be true, given how respected Royce is by rap fans, both casual and underground. Perhaps the most interesting moment on “Lost Files” is the previously unheard (to the best of my knowledge) collaboration with Snoop Dogg called “Never Caught Slipping”. It’s a typical Nottz production, but I can see why it wasn’t part of an official release as Snoop’s style doesn’t quite mesh well with the bombastic sounds.

If you slept on 2004’s “M.I.C. (Make It Count)” and 2005’s “Independent’s Day”, you’re treated to three tracks in “Blow Dat”, “Politics” and “Nickel”. Both records were odd mixtape/album hybrids that didn’t receive the same recognition that big label releases such as “Rock City” and “Death Is Certain” received, but are definitely worth a listen. “Blow Dat” is very much a mixtape-level track that sees Royce covering Public Enemy’s “Don’t Believe The Hype”, paying homage to an influence of his. Cee-Lo Green contributes his unique tones to “Politics” which is a bit corny, with no real evidence of political views or policies that Royce believes in – other than beating up competitors to his throne. “Nickel” fares better but is more of a curiosity that harks back to the days where Royce was releasing 12″ singles on Game Records, utilizing simple hooks for accessible, but very street-sounding songs.

Nottz is hugely underrated, and this record is a nice reminder why he is held in such high regards within Hip-Hop circles. The filthy “Say Dat Then” lifted from Slaughterhouse’s “House Rules” mixtape from 2014 shows that Nottz is still an animal, in fact his latest album with Rapper Big Pooh is a better example of this. Given how “Lost Files” isn’t a standard, physical release, it’s well worth lining up on your streaming service as it will open up some of Royce’s more obscure songs from a decade ago, proving that his music is more timeless than originally perceived.