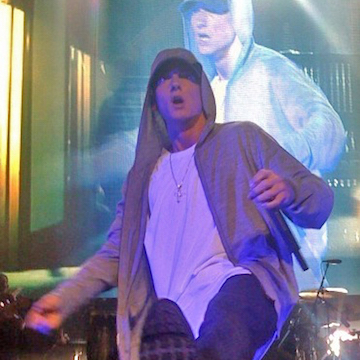 Even though Eminem didn’t “fall off” in a technical sense, as he continued to be a worldwide hip-hop star and pop culture icon, there’s a perception out there that “Relapse” was a creative low for Marshall Mathers. The title alone suggested that Eminem was falling back into old habits that weren’t healthy, and perhaps that reflected his approach to music as well – rehashing old ideas that didn’t progress him forward as an artist.

The funny thing is that “The Marshall Mathers LP 2” represented an even bigger step backward, yet simultaneously became a huge step forward. By making a sequel to one of the most successful albums ever (until Adele this year it held the record for all time fastest selling album at retail) Eminem found his creative drive again. He went back even further than that though thanks to Rick Rubin – all the way to 1981 to sample Billy Squier’s hard rock anthem “The Stroke.”