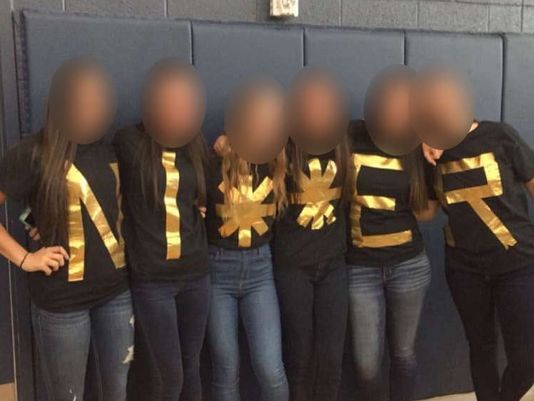 RapReviews.com is not in the business of publicly shaming and/or endangering the lives of the six girls who spelled out the N word at Desert Vista High School last Friday. Therefore we will not show you an uncensored photo of these girls, though list any of them by name, though there’s certainly no shortage of websites who in the last three days have gone out of their way to put all of their information out there as a form of retaliation for their offensive behavior. Make no mistake about it though – what these girls did was offensive and they SHOULD be ashamed of what they did. They should be ashamed and they should be repentant over thinking what they did was funny in any way.

For those who don’t know how this story snowballed and went viral, a group of high school seniors at Desert Vista adorned t-shirts with letters on the front so they could take a group picture spelling out “BEST*YOU’VE*EVER*SEEN*CLASS*OF*2016” – a rather typical high school/yearbook group pose. The “*” is what’s important in this case though. They were being used as a spacer in the sentence to get more girls into the picture, but they’re also a commonly used censorship mark for offensive words, so clearly the six girls in the photo realized the availability of the censored word by using the “N” in “SEEN”, the “1” as an “I”, two “*” marks and two letters so common they are given out automatically for the final round of Wheel of Fortune. Whether they planned this ill-conceived prank in advance or stumbled upon it after seeing the group photo is a matter of conjecture that can’t be settled by this editorial. Nevertheless the very fact they used censorship marks means they were aware of the fact the word they were spelling or pretending to spell WAS offensive and bound to cause outrage.

The “N-word” has been a source of debate since well before hip-hop came along as a culture and associated musical genre. The level of offense the word generates is largely a factor of who says it to whom, with a whole bevy of factors such as ethnicity and geography playing a factor. Many entertainers have over the years attempted to remix the word and strip it of its racist origin so that two people of the same race can use it as a term of endearment (which largely involves dropping the hard “ER” sound at the end). Of course that remix comes with a widely accepted one-to-one relationship between people of color – it’s not “cool” for someone white to say it to someone who is black or brown and could lead to getting a verbal or physical beatdown, no matter HOW you pronounce it. Many entertainers have also argued this “remix” is a false narrative – you can’t strip the word of its history.

Should the six Desert Vista High School students have been aware of the loaded history of the word or the endless debate about whether or not it’s appropriate? Again they were clearly aware that it was offensive, found it funny that it was offensive, and as even Richard Pryor would no doubt admit we as human beings are conditioned to laugh at outrageous things that shouldn’t be said or done. It trips a wire in our brains because of our programming, and that programming is entirely cultural. It’s the same reason a word like “tab****c” is offensive only to French speakers in Montreal, and why its subsequent use by a comedian there might shock and titillate audiences to laugh, while not having any effect anywhere else in the world. Indeed it’s they very history of slavery and racism in the United States that informs the use of “ni**er” whether positive, negative, remixed or original. The word gains its impact by being taboo, which is what many people who use it daily argue is the point – when it becomes commonplace then it doesn’t carry the baggage of racism and the taboo it held.

These six girls are Desert Vista undoubtedly thought that the humor value of their photo robbed the word of its power but miscalculated to an egregious degree and now regret that poor decision on their part. They should be held accountable for their poor judgment, but it should also be a lesson for them to learn about the meaning of the word and loaded history of it, not simply an excuse to parade them in front of the people while they are pelted with rotten fruit and eggs while bonfires are prepared. I’m not forgiving them for their lack of good sense, but I can still remember being a high school teenager myself, and making a lot of bad decisions simply on the basis of youthful exuberance. “Hormones” oversimplifies it greatly, but there’s definitely something that flows through your veins that age which makes you feel indestructible, which is exactly why the armed forces want to recruit you at school. If they let you get 10-15 years older, the prospect of risking your life for a college education or a monthly salary suddenly seems a lot more ludicrous.

In short six girls at Desert Vista High School made a dumb decision they thought would be funny, with at least some awareness on their part it was a risky move, considering they tried to share it on Snapchat thinking it would simply vanish after 15 seconds. Now that it went “viral” in a way they never intended, they’ve learned the most important lesson any one can learn about the 1st Amendment – “freedom of speech” != “freedom from consequences.” It’s the same reason you can yell “HE’S ON FIRE” while watching a basketball game at home but not in a crowded movie theater. What you say and where you say it has consequences, something wordsmiths like your RapReviews staff writers are well aware of, and we try to use our freedom responsibly. None of us can say we’ve never made a mistake, but one thing the 1st Amendment SHOULD guarantee that it doesn’t is the freedom to learn from those mistakes. Harming these girls, their families or their community means that nothing will be learned by anyone except that mistakes should be punished by vigilante mobs – which was as wrong in the 1800’s as it is wrong in today’s social media driven world.