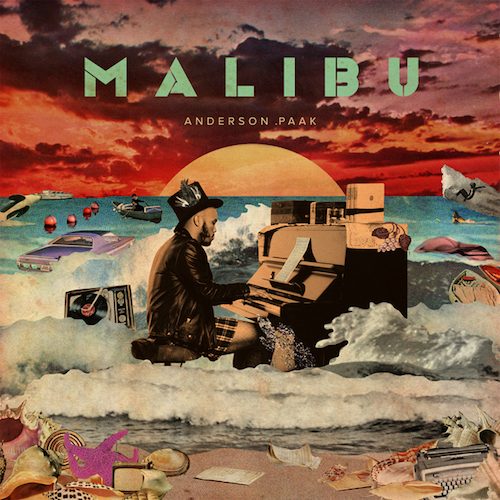 A star has emerged from each of Dr. Dre’s solo albums. Of course you remember Snoop Doggy Dogg’s show-stealing performance on “The Chronic,” which set up his own successful debut album, “Doggystyle.” Eminem wrote on several tracks and appeared on two songs on “Chronic 2001,” before becoming the biggest rapper in the world with his sophomore LP, “The Marshall Mathers LP.” With 2015’s “Compton,” it became very clear that Anderson .Paak would be the next rapper to emerge after being the MVP of a Dr. Dre album. Heading into 2016 Anderson .Paak’s “Malibu” was one of the most anticipated first quarter releases.

“Malibu” is .Paak’s second full length release (not including the two projects under his former moniker Breezy Lovejoy), following 2014’s “Venice.” He also released a pair of impressive EPs in 2015, including a self-titled project produced by the Blended Babies and a project called “Link Up & Suede” with Knxledge as NxWorries.

“Malibu” is a blend of different styles, and .Paak blurs the line of singer and rapper further, and more effectively, than just about anyone else in hip-hop. “Malibu” is more of soul/funk/R&B record than a rap album, but its foundation is still heavily rooted in hip-hop. .Paak’s delivery is a seamless blend of Anthony Hamilton, Kendrick Lamar and at times, James Brown.

“Malibu” is an extremely warm album for a January release. It is as lively and colorful as the excellent album cover. I imagine this record will feel more appropriate during April and May than the frigid Chicago winter I’m currently facing. Though songs like “Heart Don’t Stand a Chance” and “Am I Wrong” have really great summer-y vibes that can take you away from whatever sub-freezing climate you’re in and put you on a beach in Malibu.

“Malibu” is very groove-heavy, and .Paak does an excellent job of letting the production take the lead when the occasion calls for it. “Parking Lot” and “Come Down” feature fantastic bass lines, and .Paak chooses wisely to forgo rapping on these tracks and uses more of a melodic call and response. Production is phenomenal from front to back with excellent contributions from an all-star cast including .Paak, DJ Khalil, Madlib, 9th Wonder, Kaytranada, Like (of Pac Div), Hi-Tek and others.

As he proved on “Compton,” .Paak can be a very technical and profound lyricist. On “Malibu” he focuses more on vibes and grooves than displays of sharp, high-caliber rapping. He’s more of a singer-songwriter than a rapper on most of this record. While songs like “The Waters,” “The Season/Carry Me” and “The Dreamer” are clear standouts, “Malibu” doesn’t quite have a lyrical performance as impressive as “Animals” off of “Compton.”