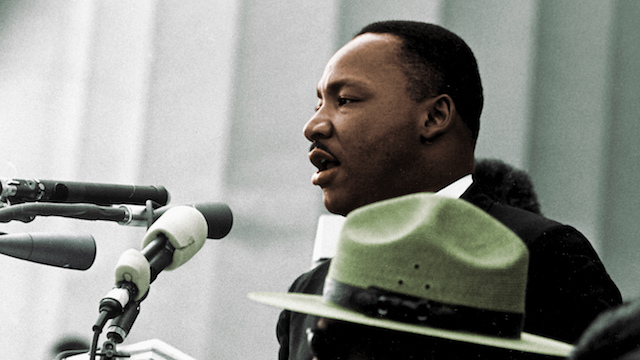 The Dream Has Not Been Forgotten

Hip-Hop is not by nature an art form of complacency and endorsement of the status quo. It was born out of disenfranchisement, segregation, poverty and the outright racism that led to all of those conditions.

The elements of hip-hop share a common theme in that they re-imagined old concepts and forms in newer artistic ways. A spray can in your hand wasn’t just a tool to finish a piece of furniture – it was a way to put a piece of your soul on a previously depressingly dull city wall. A turntable didn’t just play your favorite tunes – it could run them back and forth under a needle to create entirely new ones. Blues musicians and beat poets laid their souls bare with poetry, but breakbeats and beatboxers made a whole new way to set your thoughts to music. B-Boys and B-Girls have always been at the cutting edge of movement, but in the 1970’s and 80’s they literally set the world of dance on its head.

What do all of these things have in common with Martin Luther King Jr.? The re-imagined and re-contextualized elements of hip-hop, born out of the frustrations of the uniquely American disparities of racism that dates back to well before the Civil War, informed both the message of “I Have a Dream” and the music of Public Enemy and BDP. Of course the same can be said of Malcolm X, Huey Newton, Bobby Seale, Tommie Smith, John Carlos, et cetera – all of whom had a message about racism and inequality in the 1960’s and all of whom paid a price for that message. In some cases such they paid the highest price of all – their own lives. Freedom of speech may be a guaranteed amendment to the Constitution, but the freedom to live after speaking your mind is not guaranteed so long as evil men with guns seek to silence those who assert their rights.

Thankfully Chuck D and KRS-One were never assassinated in the physical sense, but they and many other hip-hop artists I admired growing up were “lynched” by the press in the same way Smith and Carlos were – accused of brewing hate and serving it up hot rather than being acknowledged and even applauded for their willingness to address the uncomfortable truths of America and expose the real hatred of racism. Everybody’s philosophy on how best to combat the problem of racism differed has differed in every decade since Martin Luther King Jr.’s time. He favored a non violent approach while others took a more militant stance arguing for self-defense and even armed resistance. The problem is that the mainstream media has never understood the subtle nuances, nor ever made the effort to explain any form of protest in anything but soundbites, because it always has to be watered down to be palatable for the largest possible audience.

The dream of Martin Luther King Jr. has not been forgotten though. He dreamed of an America where all men and women would be judged not by the color of their skin but by the content of their character. That dream may seem further away now in 2016 than it ever was 50 years ago, but dreams are the reason we all get out of bed each morning and go to work each day. We all dream of a better life for ourselves, our families, our peers, and for humanity as a whole. #BlackLivesMatter serves as a reminder that dream is alive: a dream of justice, equality, and freedom from the tyranny of racism in all forms – including from those mean to to serve the public trust who instead abuse that trust.

Whether you “Fight the Power” with a militant stance and a raised fist, or with a stirring speech and a quiet act of civil disobedience, take the time today to remember Martin Luther King Jr. and his dream. Take the time also to remember his dream is worth living before, and that it’s a dream we can all share in, but that like hip-hop it’s a dream that was born of inequality caused by racism and shaped by a status quo that benefited from that inequality even if its membership was not themselves enforcing it or professing racist beliefs. If the message of the dream can mean anything in 2016, dream of more than just token gestures and empty rhetoric.

Dream of understanding the systematic structure of racism and then dismantling it for good. Dream of hip-hop once again being the voice of those who have been denied one, and not simply the voice of the privileged view who have been given a taste of the good life. Dream of an America that can only learn how to heal once we stop pretending our scars don’t exist and trying to cover them up. Dream of textbooks that don’t refer to the middle passage as “immigration” and slaves as “workers.” Dream of honesty, THEN dream of equality. Dream of a world in which we can all be honest with each other respectfully and voice our differences without sounding our guns.

I have a dream today too – I dream of an America where Donald Trump’s views on race and religion are seen for the ugly hate-mongering they are. I dream of a better tomorrow and a brighter future.