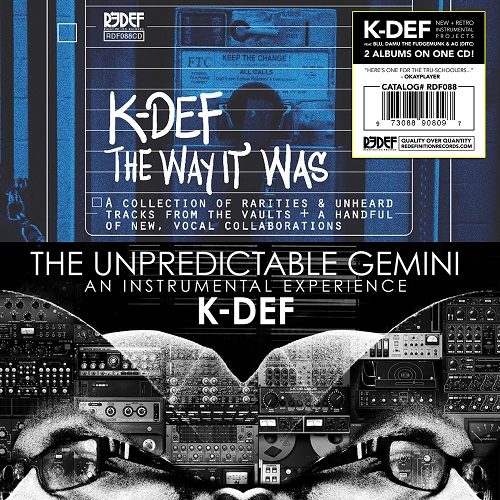 Everything else is just me, some records, and some machines going at it with help from a few friends now and then that would convince me that it all sounds fine and that I shouldn’t scrap the eleven songs I have completed and start all over again.

The above quote from Nobody’s liner notes for his 2001 album “Soulmates” holds true for many traditional beatmaker projects. It’s a potentially solitary craft, but one that needs acknowledgement from time to time. Originally, the most reliable feedback came from the professionals, the rappers and labels who voted with their wallets for individual beats. These days fans can support their favorite beatsmiths directly, provided they make their work available for purchase. K-Def has done so frequently in recent years, packaging beats new and old in different formats. “The Unpredictable Gemini” and “The Way it Was” is a double feature, available separately on vinyl and jointly on CD.

Subtitled ‘An Instrumental Experience,’ “The Unpredictable Gemini” covers some recurring elements in Kevin Hansford’s work. An instrumental artist himself, he recognizes – and respects – the work of other instrumentalists. Often, his modern tracks don’t differ that much from their role models of the ’60s and ’70s. With the help of samples and virtual instruments he captures and recreates the spirit of times past, sometimes ditching any distinct hip-hop element altogether. While some producers have an ear for an overall sound (that they develop and become known for), K-Def has an ear for instruments and their language. That’s not to say that he doesn’t care for sound, but his own clear and comforting sound may just be a by-product of the attention he pays to the individual ingredients. As a small piece of evidence for that theory, consider the cover of his 2013 release “One Man Band,” on which a hand with evenly spread fingers reaches down into a pile of instruments and machines.

“The Unpredictable Gemini” sees that hand at work once again, conducting horns, strings, flutes, guitars and pianos – and of course bass guitars and drums – to conjure up cinematic scenes. Compositions such as “A Threat to Society,” “Creeping Out,” “Trouble in the Garden State” and “The Day Before the Storm” seem to jump at you directly from the silver or the small screen, while others figure moreso as meditations on grooves and mood pieces. In typical beatmaker fashion, K-Def often isolates elements (notes, bars), yet he also looks for and finds variation within them, see how he works through the same chords on “Speakers Were Up Loud.” The riddle proposed by “Sounds Like… But It’s Not” may be mainly of interest to hip-hop nerds (So it’s not “Nautilus” then?), and perhaps only crate diggers’ ears will prick up when “Untouchable Funk Lesson” arrives with all its alluring alien elements, but there’s no denying that K-Def takes good care of our heritage.

“The Unpredictable Gemini” concludes with cameos by Damu The Fudgemunk and A.G. on the smoothly flowing traveling theme of “Gotta Get Away.” The second project, “The Way it Was,” puts the spotlight on K-Def’s past work while also sneaking in some contemporary joints. The latter are all vocal tracks that feature LA MC Blu. “The Boys” sees him busting hometown-inspired raps over a rugged track containing traces of familiar JB’s and Kool & The Gang breaks. “Fundamentals (Real Live Remix)” (the original appearing on K-Def’s 2013 release “The Exhibit”) is decked out in Shaolin-like soul textures as Blu is accompagnied by the equally insightful Quartermaine (“Antagonize me till I’m hostile / but want me docile / Feed me dreams that anything is possible / but place potholes, roadblocks and obstacles / in my way to make me shake, hop and dodge a few…”), while “Strawberry Lemonade” (also featuring Damu The Fudgemunk and Kunal) has the makings of a throwback medley.

As far as original recordings from back in the day go, “The Way it Was” contains instrumental versions of some of K-Def’s finest moments. World Renown’s “How Nice I Am” is a Golden Era oldie, an unstoppable floodwave of warm basslines and jazzy piano currents emceed by a Phife loop. Sound-wise, the beat finds itself within immediate vicinity of Pete Rock’s work on “The Main Ingredient,” but so does “Return of the Life,” the instrumental to Tragedy’s “Street Life (Return of the Life Mix),” but that actually preceeded the second Pete Rock & C.L. Smooth album. Either way these beats reflect the time they were conceived in, particularly the one that K-Def bills as “KRIS Beat ’93 – Almost Made it on Return of the Boom Bap LP – Unreleased Instrumental.” I happens to sample the same Isaac Hayes production as one of 1993’s most legendary rap songs, “C.R.E.A.M.” Perhaps it’s best the concurrence was avoided, still musically this would have been a great addition to “Return of the Boom Bap.”

From an underrated album comes “For the Family,” a somber, melancholic masterpiece for Mic Geronimo from 1997 that also shows K-Def’s maturation since he first put together friendly funk in Marley Marl’s House of Hits for the Lords of the Underground and affiliates De’1 (“Uneke,” a Juice Crew scratch fest complete with a dedication to DJ’s from the artist) and Sah-B (“Some Ol’ Sah-B Shh,” both from unreleased Reprise Records albums). Although to be fair, K-Def beats always projected a bit of a wistful vibe, which also doesn’t come as a surprise for someone who musically acts as a link between Pete Rock and D.I.T.C.

It seems that the elders of sample-based hip-hop production have a tendency to become more conservative with age, in that they simplify their beats, strip them of all redundance, wanting to stay true to the music that inspires them and not violate the source material. Comparing “The Unpredictable Gemini” with “The Way it Was” hints at such a pattern. For some, the former is not going to be intense enough of ‘an instrumental experience’ and K-Def’s approach is not necessarily going to strike them as ‘unpredictable.’ But for those who still appreciate the chops and the craft, K to the Def is as trustworthy as ever.

K-Def :: The Unpredictable Gemini/The Way it Was
7.5Overall Score
Music7.5