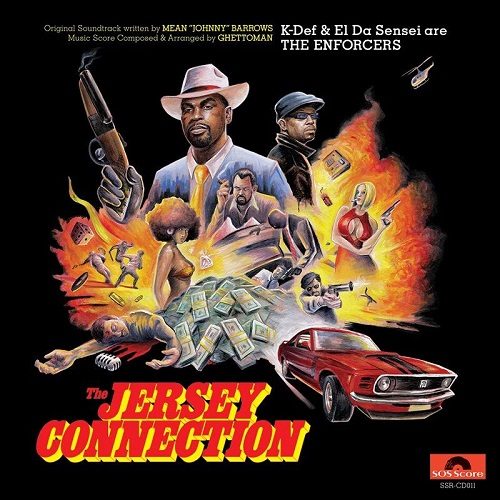 K-Def & El Da Sensei are The Enforcers :: The Jersey Connection

Some rappers and producers age better than others. Here’s two. The exact moment when they stipulated to work together is not to be determined, what’s clear is that their paths had to cross some day and a joining of forces suggested itself naturally. Both came up musically in ’90s New Jersey, and they continued their careers with sample-based music outside of the (comparatively faint) limelight they stood in 20 years ago. Eventually a K-Def beat wound up on an El Da Sensei full-length (2005’s “The Unusual”), and in 2012 El was the featured MC on the K-Def 7″ “Back to Basics.”

Actually the two set about an extended collaboration nearly ten years ago, so “The Jersey Connection,” which assumedly consists of archived material, is a visit from the past no matter how you look at it. Regardless of whether their traditional transcends to timeless or not, teaming up as The Enforcers and staging a visual and musical tribute to the blaxploitation era, K and L deliver what they’re known best for – suspenseful-symphonic beats and kick-ass raps whose deciphering requires an audience that isn’t completely foreign to rap ciphers. Da Sensei sounds like he could join his partner Tame One anytime to revive the Artifacts, as his punchy flow and compact vocal tone seemingly haven’t aged one bit. K-Def meanwhile still digs in the same departments of the sound library as he did in his Real Live days, constructing beats based on historic music that move the plot forward without upstaging the MC.

Achieving a rich sound by leaving enough space for the notes to breathe is a surefire formula for cutting-edge music, and K-Def preserves the cutting edge of ’70s movie soundtracks in his brand of true-to-the-roots hip-hop. “The Enforcers” sets the pace with an impressive array of instruments (plus vocal cuts) checking in and out of the rhythm section marked by moody bass elements and hard snares as Da Sensei advertises the musical chops that are at work here, not renouncing retro imagery like “Robust like Cold Crush / LA ‘Shine and Moe Dee at the top of their time” and “Your soul’s filled in / with that old feeling / that’s so appealing.”

After the percussive and purposeful but still casually cool “Give You What You Need,” the title track kicks your door down with strong-arming bass guitars, spooky sound effects and scratches that include a Larry-O soundbite from the Real Live days. Da Sensei upholds his end of the Jersey connection with a dedicated performance:

“It’s meant to be, my timetable is set
No matter the cards dealt, melt mics until my death
Until there’s nothing left, dead and I’m gone
New niggas passed on what I meant through a song
So cut the small talk, cut the check and kick rocks
Slapbox tracks and lyrics lick shots”

The mini-album continues on the same trajectory but with reduced intensity. The remaining three tracks see El Da Sensei more doubtful of his mission. While on “Give You What You Need” he unceremoniously cut any ‘real rap’ rhetoric short with “Fuck the talk about bring the real back, just do your job / Do your duty as an MC and this shit is no prob’,” he still repeatedly brings up the past as a reference point. While he’s reluctant to pass a verdict on the rap scene of the day, he echoes the existing discontent and humbly offers his services should anyone still care for his brand of rap: “If you want it, I will oblige your choice / Bob and weave and jab, stab with the voice.”

Maybe this is actually a smart strategy to deal with the situation. On “The Recipe” he promises not to “bore you with my industry woes” but simply “roll with the blows and steadily grow,” accepting his status performing “regular dates, booked state to state.” As “Years in the Making” indicates, El has not only patience, but also a plan: “I teamed with a nigga with beat knock to get you on my jock.”

“The Jersey Connection” delivers that old time feeling, courtesy of two heads who were actually there, at least for the rap part of this clash of the eras. On the musical end, ’70s soundtracks are always an inspiration, and even if El Da Sensei’s lyrical focus is rather narrow this time around, The Enforcers still make for a worthwhile collaboration. If my feeling for language suggests that they can’t be “monumental, fundamentally solid” at the same time (as “Years in the Making” puts it in one breath), “fundamentally solid” is still a sufficient sales pitch.