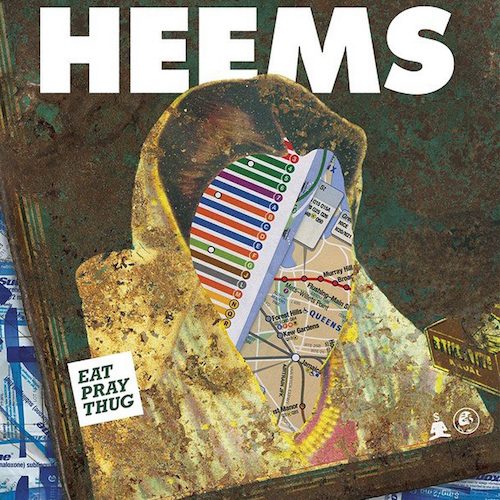 If you know Heems it’s probably because you know Das Racist. Himanshu Kumar Suri may have seemed likely an unlikely hip-hop star growing up, but the boroughs of New York City have traditionally been a breeding ground of (and indeed birthplace for) hip-hop, and he’s as Queens as L.L. Cool J or 50 Cent. Heems seems to be going out of his way to point that out with the cover of his “Eat Pray Thug” album. Given that Das Racist got branded by people as a “comedy” or “alternative” rap group, and his previous solo projects were knocked for their lyrical depth, you can hardly blame him for trying to place his rap roots around the way from MC Shan, or remind you he could have had chicken and collard greens for Christmas with the Simmons family. Heems is Queens y’all and don’t you dare forget it.

Another thing Heems won’t let you forget is that he’s South Asian, specifically Punjabi-Indian decent, and one of the reasons for the success of Das Racist specifically is how their name mocked the very stereotypes their members experienced. That’s another prevalent theme on “Eat Pray Thug” for Heems – not just how New York he is (I mean there’s actually a song called “So NY” where he brags “I’m so New York I still don’t bump Tupac”) but how distinctively “too dark” he is for cops and various goons who seem to have gotten their xenophobic marching orders from Donald Trump. It’s unfortunate that in the five boroughs, one of the most ethnically and linguistically diverse areas of the world (by some estimates over 800 languages are spoken there), Heems would experience that much discrimination in his daily life. As songs like the almost spoken word/beat poet delivery of “Patriot Act” make clear though, harassment of him or anybody with his ethnic background or apperance became pretty routine after September 11th. “That’s a privacy prison, that Pentagon… guard your home, neighbor with stones, government drones.” He lived through some s–t. “The Towers fell in front of my eyes… for a month they used my school as a triage.” “I was Osama. We were all Osama… we rushed to buy flags for our doors.”

It’s not a song you can dance to, nor one you can sit quietly and enjoy, nor are similarly themed songs like “Flag Shopping” and “Suicide by Cop.” You gain a significant amount of insight into the life Heems leads as someone is “so New York” yet at times clearly feels like he and his family were foreigners and outsiders to what he so proudly proclaims. I appreciate his insight especially since he’s able to articulate in clever ways like dubbing himself “the Hindu Grand Puba,” but it’s also fair to say that Patrick Taylor had a point. He once described the post-Das Racist version of Heems as unable to decide if he’s “an Indian-American activist, an academic, a rapper, or a stoner man-child.” That confusion is evident on songs like “Damn, Girl” when he sounds like a mixed up mash up of Frank Ocean and Fetty Wap. The singing doesn’t do anything for me and the few bars there are don’t hit that hard.

At other times the beats fail Heems more than his experiments in style. “Home” might be a good song if you’re tripping, but it’s a well produced pile of sounds that repeat themselves until I don’t want to hear them any more. It never achieves a melody, or any kind of boom bap, or anything that would cause you to bump it in your whip. Not all hip-hop needs to be that, but even the experimental hip-hop has to captivate you, and Heems doesn’t draw me in with either his rapping or singing on the cut. On the other hand “Jawn Cage” is the kind of hip-hop that pushes the envelope in the right way – electronic, crunchy and hard. It also features some of Heems most freaked out flows, drawing in and out breath to keep a flow pattern of intricately paced cadences and concepts. There’s no doubt from hearing the track Heems could be on some next level s–t like Gift of Gab was in the early Blackalicious days if he tried. “Sometimes” it’s like he doesn’t want to try that hard though.

I’m not knocking that song or single in particular – it’s an enjoyable piece of hip-hop with a few hidden gems and a little bit of a political undercurrent if you’re paying attention. There are times though that Heems just seems to be going through the motions – “Hubba Hubba” could have been left off the album without missing anything as could the unfortunate “Pop Games” – a song better suited for somebody like Lady Gaga or Miley Cyrus. I think Heems has something to say about being South Asian in a post-9/11 world and I want to hear it, but I also don’t need to hear him make a half-assed effort on songs that aren’t political or about his personal experience, and I damn sure didn’t cop this album to hear him croon.