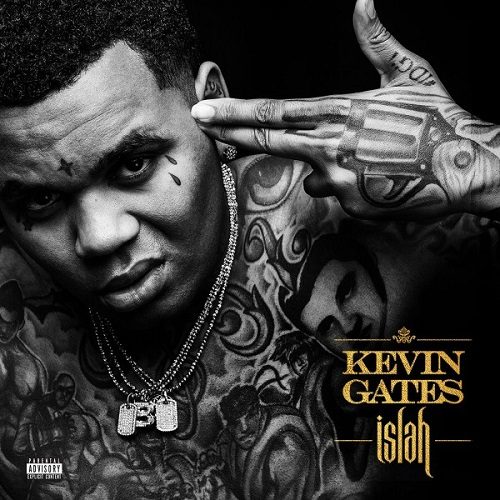 Kevin Gates is a vocal powerhouse. Not in the sense of singing, or in a metaphorical way, but in the sense that his voice exhibits extreme, raw POWER. Many rappers have unmistakable and unforgettable voices (Lil Wayne, Young Thug, Danny Brown, for example) but few have the strength and sheer “BOOM!” of Kevin Gates. This in itself does not qualify Gates as a great (or even necessarily good) rapper, but it does a great deal to make his songs effective and exciting to listen to. Luckily for Gates, his rapping and some of the production backing it do contain other noteworthy qualities, but unfortunately they come inconsistently and often without much substance on “Islah.”

Gates is not a newcomer to the rap game. Although he was a member of the XXL Freshmen Class of 2014, he has been making mixtapes for years now and became well known in the rap game when he dropped his 2013 tape “The Luca Brasi Story.” This project and three tapes that followed it up before “Islah” (“Stranger Than Fiction,” “By Any Means” and “Luca Brasi 2”) showcased some talent in areas such as a decent flow and a gritty, convincing overall story of struggle on the streets, but lacked much technical skill and did not contain enough quality beats to back up Gates’ words. The aforementioned vocal presence Gates uses so well on “Islah” was available on these past projects (it’s not like his actual voice has changed) but the way he used this voice was not quite perfected yet. There were times where it looked as if Gates had really hit the spot vocally, however, such as on the track “I Don’t Get Tired” off “Luca Brasi 2,” where he completely obliterated the hook with his full force energy and aggressiveness. On this track he even spit passionately and with a very real fire in his voice throughout the verses. It was not annoying in a Meek Mill type of way, however (the listener wasn’t being frantically shouted at), but instead it made the dark and serious subject matter come to life.

While this vocal ability is worth taking great note of and in many ways makes “Islah” the enjoyable listen it is, this ability is not consistent throughout the project and cannot completely compensate for other weaknesses. Gates’ lyrics and subject matter are often weak on these songs, particularly on tracks like “Thought I Heard (Bread Winners’ Anthem),” where he monotonously trash talks opponents and boringly boasts of how he is making great deals of money (something that the listener is most likely quite aware of seven tracks into this album). Track 2, “Really Really,” is an immediate hiccup after the impressive intro track and features unappealing braggadocio by Gates. Nevertheless, there are tracks on this album that bring out Gates’ lyrical side. “Time For That” contains the brutally self-realized line, “Askin’ where’s my heart, good luck findin’ that.” On the second verse of “Hard For” Gates states, “God forgive for the brains I done blowed away/ put that on my unborn child and my throwaway,” in a sincere thug’s way that makes the listener hungry for more of Gates’ lyrical side.

The production on “Islah,” handled by a variety of beat makers from Go Grizzly to Mad Max, is not exactly anything to write home about. Most of the beats contain a hard hitting bass with fairly generic drum patterns backing up simple synth arrangements. “La Familia,” however, is an exception. Although it features the same booming bass and weak drums, it also adds some of the most menacing sonics on the whole album, courtesy of producer Millz. Another interesting (but lackluster) beat choice is the string lead production of “Hard For.” What’s interesting here is not the poor beat choice or weak lyrics on this track, it is the way that Gates’ voice can turn an acoustic guitar riff that sounds like something Enrique Iglesias would blabber over to swooning 15 year olds into a legitimate hip hop beat.

Overall this album has some definite stand out tracks: “Not the Only One,” “2 Phones,” “La Familia” and “Time For That.” The rest of the project is not bad, it’s just generally underwhelming. The good news is that it feels underwhelming in the sense that Gates could do much better. In other words, the next Kevin Gates project is definitely one to look out for.