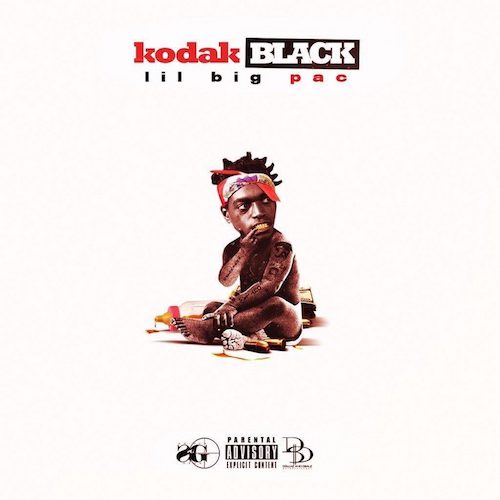 It is often unwise to dwell on the hyperbolic boasts of modern rappers, particularly when said rappers are relatively new to the scene and largely unknown. Kodak Black, however, made a statement prior to the release of his latest mixtape “Lil Big Pac” that commanded the attention of hip hop fans all around, largely for negative reasons. Kodak made the claim that he is better than both Tupac and Biggie Smalls (thus the title of this tape, I suppose). This immediately turned the heads of some, angered the hearts of others, and, well, didn’t matter to many. Brags like Kodak’s are nothing new to hip hop, he simply took them to a new level, one regarded by some as downright disrespectful. While his statement can be written off as a number of things, (attention seeking, promotional, or just plain shit talking) it can tickle the listener’s ear just a tad, making one wonder if Kodak can back up even some small degree of his statement.

For this reason, one might expect to hear a great deal of hunger on “Lil Big Pac.” In actuality, however, the tape showcases more laziness than anything. Kodak’s flow is lazy. Kodak’s rhyming is lazy. Worst of all, Kodak’s overall presence is just plain lazy. As he meanders his way through equally sleepy, bass-heavy beats (such as that of “Prodigy” which features what comes across as an off key xylophone in the background) Kodak often seems like he is going to doze off before spitting the next predictable word that rhymes with “shit” (you guessed it, it’s “bitch”) or possibly not even rhyming at all. This rapping style is not exclusively Kodak’s mistake, and maybe that’s part of the problem.

Lyrically there is some substance to be admired on this mixtape. “Too Many Years” (featuring PnB Rock on the hook, who brings a great deal of passion to the song) is a tale of street life and the hardships that accompany it, whether it be jail time (which Kodak recently experienced) or an early death. Kodak shines lyrically on this track as he brings emotion and sincerity on to the record. Other tracks, such as “Gave It All I Got” bring a more introspective sentiment to “Lil Big Pac,” but these are few and far between and still lack quality deliveries and substantial beats to back them.

The majority of “Lil Big Pac’s” track listing is a lackadaisically presented conversation on lean sipping, sex, and many more of the mind-numbing topics that plague much of today’s rap music. With more of the emotion and substance of tracks like “Too Many Years” and an improved skillset, Kodak Black could turn out to be worth an attentive listen. For now, however, hip hop’s greats have nothing to worry about.