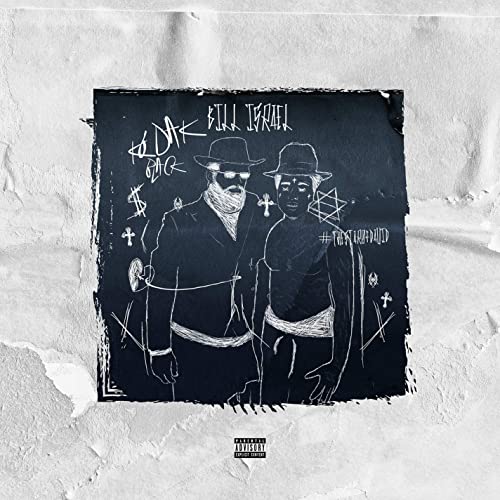 Four years after his confusingly titled “Lil Big Pac” became the first Kodak Black project covered at RapReviews we’re back with the equally obtuse “Bill Israel.” Both words rhyme (depending on your pronunciation) but what does it actually mean? Is this an alter ego for Kodak? Possibly. Born Dieuson Octave in 1997, the rap star later changed his legal name to Bill Kahan Kapri, but that doesn’t make it any more obvious why “Bill Israel” is a good pseudonym. Does “Israel” imply wealth, power, and control? That would reflect an antisemitic stereotype about Jewish people, and I doubt his parent label Atlantic Records would approve of it. Does “Israel” mean he’s fiercely independent and uncompromising even when surrounded by his enemies? Maybe. You can’t glean any of this meaning from the lead single “Pimpin Ain’t Eazy” though, a track released a full year before the album.

If you thought this was a cover of Big Daddy Kane’s similarly named seminal rap duet with Nice & Smooth you’d be disappointed, and if you thought the “Eazy” spelling indicated it was a tribute to the late Eric Wright you’d be equally disappointed. Honestly it’s not even about pimping. He’s not out there collecting money from his hoes, strutting in a fur lined suit with a stylish cane, threatening the patrons who refuse to pay his ladies of the evening. All he talks about is how few fucks he gives about anything.

“Momma watch her lil’ boy turn to a menace
I don’t care, I go fed, get a life sentence
I want everybody dead, nigga no limit
I don’t shake niggaz hands, cause I ain’t friendly
When I pull up to the crib, have no panties
I been leanin to the right, like I’m on Xannies
I been thuggin all my life, I ain’t romantic
When I whip out the fo’-five, don’t panic”

Despite the mismatched title and topic I do appreciate that Kodak Black is a more of a traditional “rapping” rapper and doesn’t AutoTune his way through every song. A counter point is that he’s just as hard to understand either way. Black has an incredibly strong “Flurrrida” accent and he doesn’t go out of his way to enunciate anything that he says — barely parting his lips at all to spit out his vocals. This makes it relatively easy for other rappers like Lil Yachty to outshine him on tracks like “Make a Hit.”

And despite me offering praise for his more traditional rap style, he just can’t resist the temptation to do pitch corrected electronic tracks like “The Fire.” This song isn’t just misnamed — it’s completely inaccurate. A song with that name should be a banger, a head nodder, some pure heat on the beat and vocals that are unforgettable. It’s entirely forgettable — average at best.

“Bill Israel” clocks in at under 40 minutes in length, which means that Mr. Kapri doesn’t overstay his welcome, so let’s give him respect for that. There are even some songs where I can start to see his appeal, such as the Earl on the Beat produced “Feeling Myself Today,” arguably the album’s most charismatic track. A lot of the time it seems as though he just walked in the booth, read what he wrote down in one take and said “good enough.” This song feels like he actually put his all into it though and it shows.

Honestly “Bill Israel” isn’t terrible. I could give Kodak Black higher marks if he tried a little harder when he’s flowing, but arguably that could offend the fan base who have already become accustomed to his accent and his mush mouthed delivery. Damned if you do, damned if you don’t. If it damns him with faint praise to say he’s somewhere between “mediocre” and “barely acceptable” it is what it is. I don’t hate what he’s doing but I don’t find anything here compelling enough to demand repeated playback.