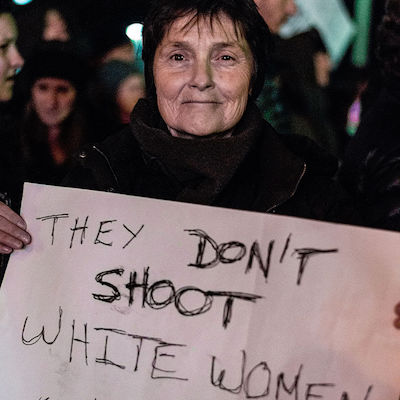 White Privilege at the Expense of Black Lives

I had a very uncomfortable incident at the gym on Sunday. I came an hour earlier than I often do, probably because I was feeling guilty about the calories I consumed the night before (too much pizza and soda during UFC 200). I was just about finished getting dressed when a stranger sat down on the bench in front of me and started a conversation with me. When I tell you what transpired I feel the need to tell you I was looking down at my shoes to make sure the laces were tight – I was not seeking to banter or make small talk though I’m not opposed to shooting the bull with people I know at the gym, particularly if we had struck up a friendly relationship during a class or event. This was not such a person but apparently he had something to get off his chest and chose me as his unwitting target.

Stranger: “Can you believe these protests?”

Me (surprised): “Well it has been an eventful week.”

Stranger: “I can’t believe THOSE PEOPLE are complaining about 600 deaths by the hands of cops. How about the thousands of THEIR OWN they kill every year in their own neighborhoods? Why aren’t they out in the streets protesting THAT?”

Me (disgusted): “I don’t have answers for you.”

I left the locker room as fast as I could. I could feel the skin crawling all over my body – WHITE skin. He assumed that as a white person, speaking to another white person (even a stranger), that we were speaking the exact same language. I didn’t have the strength of character to stand there and dress him down for his assumptions. I just felt nauseated that I had suddenly and unwittingly been included into a group I didn’t want to be a part of where “I” am a guy who gets what this stranger is talking about and “they” just don’t get it. It’s hardly the most vicious example of white privilege I can give you, but it’s a starting point for what I want to talk about today.

It’s not as though I haven’t always been aware of my role as an outsider in hip-hop culture. I’m a white boy from a white state who grew up experiencing the only kind of discrimination somebody in that situation ever will – the rich kids versus the poor kids and the jocks versus the nerds. Still as a kid whatever minor alienation I felt under those circumstances propelled me into the world of hip-hop music and culture. I didn’t want to sing in choir, I wanted to rap. I didn’t want to play an instrument in band, I wanted to use a turntable as my instrument. I adopted my own kind of “they” and proclaimed that hip-hop artists got it and everybody else didn’t – “they” were ignorant about the power of expression of the arts. You couldn’t love those arts and be ignorant of its blackness.

It’s not as though we weren’t talking about “white privilege” back in the 1980’s and 1990’s. Even though they’re beloved today (R.I.P. MCA) it’s not as though the Beastie Boys got a free pass, with many people begrudging the fact that they rocketed to pop stardom and concert tours. When Robert Van Winkle sold 15 million copies of “To the Extreme” that conversation became a lot more pointed and heated, particularly once the hip-hop media of the day dissected his bio and the numerous frauds contained within it (which Mr. Ice still asserts was his label’s idea and not his). I still felt like I was on the right side of the debate because it was “us” versus “them” in keeping the phonies out of hip-hop. It didn’t matter to me being called a “cracker” or a “cave dweller” every now and then, because over 400 years of oppressive racism and systematic abuses by the white power system were being called into question. Even I as a white kid was asking why black history wasn’t being taught in school – making me even more of a weirdo to my peers than I already was – but not like I gave a f#$!.

Of course none of this ever gave me the opportunity to unpack the invisible knapsack I was wearing, the one which this stranger at the gym had just filled with bricks and slapped on my back. It’s easy to be a white supporter of hip-hop who applauds black pride, black culture, even black power. The difference is that the white youth, even one who grew up in the inner city or in poverty, still gets the benefit of white privilege the black youth doesn’t. Peggy McIntosh does a great job of putting this into perspective in her essay about white and male privilege, but I’ll put it into my own perspective simply on the basis of my interactions with the police. I’ve been pulled over for a dozen or so infractions in my life – going 45 in a 35 MPH zone, having a broken tail light, turning the wrong way onto a one way street, even tailing the car in front of me too closely. I’ve never had to fear for my life during any of those stops. I was taught to respect law enforcement and say “Yes sir” and “No sir.” I was taught to leave the car running and keep your hands on the wheel at all times, and to only reach for your ID when the officer asks you to. I followed those rules and still do, and the worst thing to ever happen to me is a ticket. Often times the officer will say he “appreciates my cooperation” and “knock a little off” – he’ll say I was going 45 but knock it down to 40. White privilege.

Philando Castile was a black man in a car pulled over by the cops so he never got those breaks. Castile is dead today because a cop assumed he was dangerous solely on the basis of his skin.

I get an unstated and unlabelled benefit of being white in an America that for most of its history has been engineered to benefit white people. If you’re white and you’re reading this right now think about those benefits, even if you don’t live in the United States. You get those same benefits in Canada, Australia, the United Kingdom, most parts of Europe, and so on. You’re more likely to be hired after a job interview than someone of color, even if you have the same qualifications for that job. You’re more likely to get a loan on a new home and at a better percentage rate because you’re automatically assumed to not be “a risk.” The bouncer at the night club lets you in without patting you down or making you take your cap off. Nobody ever asks you if you’re a terrorist solely on the basis of your accent. Most of all you can wake up tomorrow knowing that if you run into a cop somewhere along the way in your day you’ll probably be okay – you won’t be thrown to the ground and shot in cold blood while you’re helpless and defenseless. Marshall Mathers may have pissed off a few cops in his day (well more than a few actually) but he’s still here. Unless you are a citizen of color (black or any other) in this country, whether you were born here or immigrated here, you can’t feel the weight of the system bearing down on you. “The man” doesn’t have his foot squarely on YOUR neck. The white man will get a fine or a week’s community service for an ounce of marijuana. The black man will get two years or more in jail. The white man gets a ticket, the black man gets killed. You get to live your life or you get your life ruined or ended. White privilege costs black lives.

I guess that’s what the guy across from me on the bench doesn’t understand, couldn’t understand, and since he probably doesn’t like rap music or read hip-hop websites never WILL understand. I came to the gym an hour early so this stranger is very likely someone I’ll never run into again. If I did he’ll have probably forgotten all about the Dallas police shooting or whatever thing was bothering him that made him spout off to me. He’ll remain comfortably ensconced in his white privilege and his conceit that the protestors are wrong. They are NOT wrong. #BlackLivesMatter because black men and women are more likely to be shot in an encounter with police, and until the reality of this situation is addressed, the kind of anger that boiled over in Dallas will keep bubbling to the surface again and again. The movement is not about meeting violence with violence but about ENDING that violence. If you’re white though I don’t expect you to get it, and since I’m white I don’t expect I’ll ever have to experience fear for my life when I’m pulled over or questioned by a cop. It shouldn’t be that way and unless our society can change that the protests won’t go away.