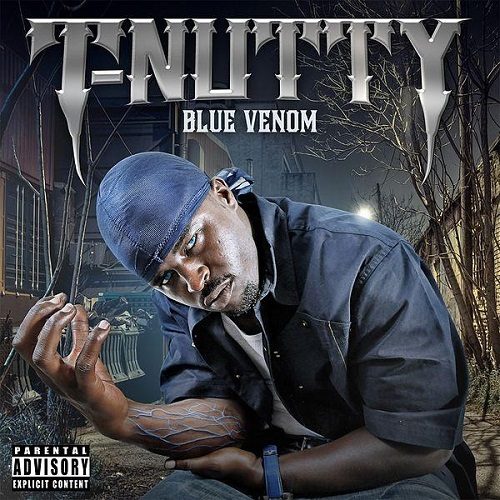 T-Nutty is a phenomenal rapper.

The opening sentence of this review was a given since even before I heard “Blue Venom.” The question is how can such a claim be proven? How does T-Nutty’s awesomeness manifest itself on his latest outing?

First things first, Sacramento’s T-Nutty has been active for almost twenty years, emerging in the regional spotlight in the early ’00s with features for hometown heavyweights Brotha Lynch Hung and X-Raided. If he’s had any noteworthy hits or influential releases, they haven’t traveled too far beyond his turf. Nothing really points to him being anything special (unless you attribute any particular significance to his appearances on more recent Tech N9ne releases), he seems like any other minor fixture in NorCal rap with a string of albums and collaborations. Who – which is more than a trivial fact – after all these years still thinks he has to rep his set (he’s a 24th Street Garden Blocc Crip). Not necessarily the stuff of great careers.

At the same time T-Nutty is a proper microphone technician, known to adorn himself with flowery nicknames like ‘Last of the Floeheakinz’ and ‘FlowmasterMouth’. He’s proof that creativity and gang affiliation aren’t mutually exclusive in rap. Drawing attention to his words by proceeding fastidiously with a punctuated flow, he’s maybe not in a class with but somewhere in the vicinity of showstoppers such as Twista or Busta in their prime. At a time when vocalists outsource emphasis and emotions to computer programs, T-Nutty’s accentuations are completely deliberate, and they come with that typical tongue-in-cheek undertone made famous by the likes of Mac Dre, the Luniz, Mistah F.A.B., E-40 of course, and yes, also Brotha Lynch Hung.

When it comes to the actual performance of a rap, there are two major categories of rappers. The ‘Watch out, here I come’ rapper blesses us with his presence. There’s an ultimate, definite quality to what he does. He has come to deliver us from ignorance, boredom and mediocrity. The ‘Watch out, here it comes’ rapper on the other hand likes the sound of words as much – or more – as the sound of his voice. He relies on the power of language, the rhymes, the wordplay, the innuendo, on logic and rhetoric. If you asked me whose act has a better chance of resembling a real-life conversation, I’d say the latter. In the album’s first showcase of his abilities, the “Venom Intro,” Nutty drops this reflective vignette that offers both insight into the rapper’s environment and his thinking: “T-Nutty / your buddy / I’m prolly somebody / that owe you some money / Forgive me, my brother, I hope you still love me.”

The gift of gab carries many an MC away, so moments like these can get caught up in the whirlwind of spitting bar after bar. On “Blue Venom” Nutty nevertheless limits the tongue exercises to a couple of shorter tracks. Beyond that he applies his method to traditional song material. “Wassup Cuh” finds him in a jovial mood greeting the homeboys. “Liquid Drano” is slightly more intense as Nutty examines his behavior when he’s had one too many. “Tension” captures the atmosphere when situations come to escalate. Singer T Millz (not T. Mills) helps build the tension over melodically dark synths, before Nutty makes unquestionably threatening lyrical gestures like “Bangin’ is played out, but I still be happen to do it, though / That shit-talkin’ in the studio ain’t official till you prove it, bro / Coolest dude you know till muthafuckas try to cross me…”

“Blue Venom” contains its share of overly typical tracks like “Affiliated” with the participation of usual suspects Mitchy Slick and Ampichino or the hustler’s prayer “How it Goes” featuring Mobfather C-Bo and Big Gunplay (not the Rick Ross compadre). The album’s heart really begins to beat after halftime, though. The desolate “No Love,” elegantly based on a famous soul song, finds him concerned about his cardiac health in a figurative sense, while on “When I Write These Songs” he pours his heart out to his kids with verses that overcome formal simplicity with emotional depth:

“I’m a thug, but still I try to teach ’em right from wrong
They understand when I express it through this microphone
I’m just tryina get it right before my life is gone
Put my soul in the music when I write these songs
(…)
I ain’t gon’ lie, I take it to the heart, try to play my part
See ya through even when it’s dark, I’m the family shark
Swimmin’ through these streets, little Todd, never been a mark
Never took the time to get it right, now I’m finna start”

“Death Tag” describes life on the streets as a tragic game in compelling fashion before we find the rapper in pursuit of lighter subject matter with visits on the dancefloor (“What It’s Lookin’ Like”) and the smoker’s lounge (“Smoke Pouring Out”). Most of the songs easily meet their mark, with the exception of “Ghetto Cinderella,” which can’t make up its mind if it wants to focus on the superthug or the ride-or-die chick on his side. Still T-Nutty is able to squeeze in memorable lines like “I keep it solid as a hard rock / Stay polished even though my life’s a hard knock.”

Overall “Blue Venom” is a varied album replete with rap rhetorically refined by the streets delivered by a technically astute rapper who’s on the classic trajectory towards repention and reformation. Production ranges from hard-hitting to heart-tugging, from cloudy to cold getting dumb, literally covering decades of Cali hip-hop. T-Nutty may not be the freshest face on the scene, but when an artist keeps his creative juices flowing the way T-Nutty does, they’re pretty much a fountain of youth. Which naturally raises his awareness for those who throw their life away:

“Niggas playin’ with they life like they got another
Every day ready to die like nobody love ’em
I seen the homie’s mama cry when she tried to hug him
in a hospital bed, hate to see him suffer
Bounced back, now he got murder on his mind
What you suckers throwin’ up? You’ll get murdered for that sign”