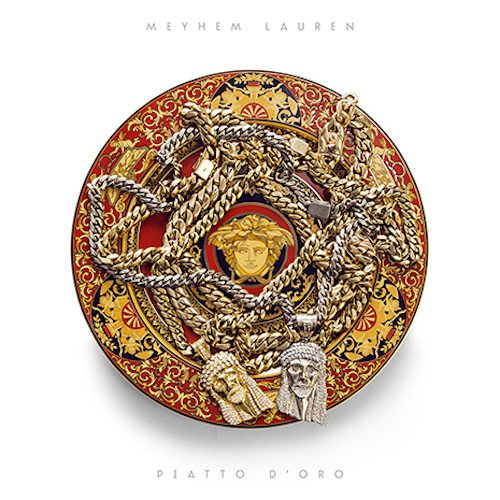 Meyhem Lauren currently occupies that curious crossroads of hip-hop where you are a little too well known to be the “underground undiscovered” but not quite notable enough for a Wikipedia entry. You don’t have to take my word for it — try searching for him on their website and you only get references to his cameos on other people’s records or producers who have laced his tracks. That’s almost vexing to me given he’s been a factor in rugged, hardcore East Coast hip-hop since at least “Respect the Fly S**t” in 2012 if not longer. I certainly thought that 2014’s Buckwild co-signed “Silk Pyramids” was the moment he arrived in a major way. When a legendary member of the Diggin’ In The Crates crew thinks enough of you to produce your whole album you are THAT DUDE (or let’s not be sexist – you are THAT CHICK too). There’s no reason he’s not “notable” at this point other than some half-assed editor who decides which musicians have earned it based on their own arbitrary and opaque standards.

Make no mistake about it that I’m firing a shot across the bow by making “Piatto D’Oro” a featured review this week. The literal translation is “Pot of Gold” and if there’s a cultural subtext that’s missing from a literal reading someone who speaks Italian can send me some feedback on it. Frankly I think it reads exactly as is. Lauren has paid dues long enough to have earned a golden reputation and to brand an album as being a full serving of musical wealth. He harkens back to the bygone era of emcees like Kool G. Rap who had a little bit of a lisp to their delivery that drew in your attention as a listener, turning what might be considered a deficit to a benefit by making you pay attention to every last word. Meyhem isn’t resting on those laurels though — he’s developed into a cinematic verbal storyteller as tracks like Large Professor’s “Not Guilty” bear witness to.

He’s a little bit raspy, a little bit gritty, and a whole lot rugged. This isn’t rap with apologies to political correctness because he’s “a G to the end.” The crew of compadres who cameo on his tracks are much the same – East Coast favorites like Roc Marciano, Action Bronson and Big Body Bes. If you’re easily offended by casual misogyny then I have to be honest that tracks like “Bonus Round” would probably piss you off. I’m taking the broader view though that (1.) the Harry Fraud beat is RIDICULOUSLY dope and (2.) the all-star selection of guest bars is just too damn nice. I’m not endorsing the attitude, but if we’re talking about it being “cinematic” then let’s visualize it like a film and respect it as an artistic work. “Scarface” and “Goodfellas” aren’t documentaries right? No one said you should live your life like Tony Montana either.

Speaking of production “Piatto D’Oro” takes that next evolution from having an entire album laced by Buckwild to having everybody WORTH lacing an album drop a hot track. Scroll up and down the tracklisting and it’s a who’s who of people you’d want to work on your s**t too – if you could afford their rates that is. Alchemist provides quiet storm AM radio jazz that perfectly offsets the hardcore bars of “Dragon vs. Wolf.” DJ Muggs bangs out pianos and drums as Lauren reaches for higher levels of “Elevation.” Super Dave gets dusty with the funk (it reminds me a lot of Flying Lotus) for the braggadocious “Hate” while Lauren brags “You motherf**kers hate it/I’m even on point while I’m faded.”

No one producer dominates the whole of “Piatto D’Oro” but a few leave a bigger thumbprint than others. Seth Silenser proves he’s capable on three out of the first four tracks though the ominous “Aggressive Metal” might be my favorite – it’s the kind of song that makes you want to drop the top and crank the volume to the maximum in residential neighborhoods. You gotta give it up to Icerocks too – his “Flexxin” starts out like an updated version of Gang Starr’s “Code of the Streets,” then flips it 180 in a completely different yet equally dope direction, and then slows it way down for the practically medicated flow Lauren shows on “Sweet Chick.” There’s some seriously artful s**t going on here as Lauren either matched his flows perfectly to the beats he was given or he laid down bars and let the producers meet him halfway – but either way you’d think this whole album was done in one studio session because nothing feels mismatched or out of place.

It may seem like I have only praise for Lauren and you’d be about 85% right on that. The other 15% is that there are a few songs that just don’t click to me for whatever reason. DJ Muggs is normally infallible but “Live Ginger” makes me hit skip every time. “Garlic and Oil” is nice, but for once I actually feel like Action Bronson’s friendship might have been a detriment because he overshadows Lauren on the track. And even if I’m being generous about Lauren’s general level of misogyny and trying to give him a pass on it you simply can’t ignore “F**kin the Whole Crew” and pretend it doesn’t come across like “women are only meant to service me and my mens and nothing else.” Lauren’s not perfect by any means, and there are times where he relies on the charisma of his delivery too much and phones in his bars. 20% more effort and 10% better production would make “Piatto D’Oro” an all time East Coast classic, but considering he gave this whole album away FOR FREE it’s fresh as hell. I think Lauren is trying to fire a shot and make a statement too – I may not be “notable” but you WILL remember me.