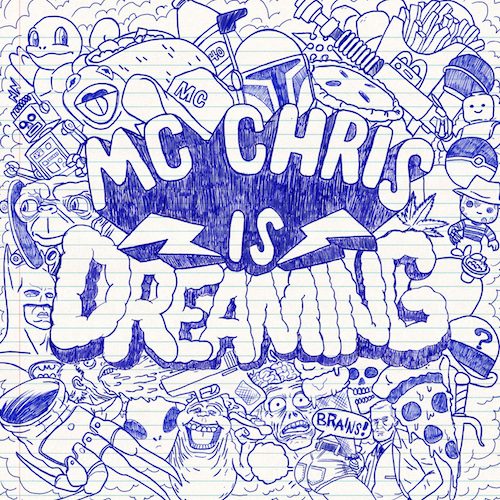 He’s the purposeful and playful reversal of MF DOOM — when it comes to the spelling it’s all lowercase when you see that man’s name. As such it sometimes fools you into thinking you’re not typing something important when you write mc chris name, but nothing could be further from the truth. He may be modest about his moniker, but he’s a true-and-living pioneer when it comes to merging hip-hop and nerd culture. Late arrivals to the party may only know him from doing voiceovers for [adult swim] cartoons, but heads know he’s been dropping albums since 2001. And yeah he does sound like he’s been steady inhaling helium, but that doesn’t mean he can’t freak a flow and control a mic like Fidel Castro.

To my surprise it’s been about five years since chris dropped a full length album. There have been some smaller projects like a “Marshmellow Playground” album meant for kids, and a special EP created for the people who backed his cartoon on Kickstarter, but not the 100% full length raw and nasty mc chris we know and love (or maybe even in some cases hate). “mc chris is dreaming” is the long-awaited return. It’s 59 minutes and yes it’s raw chris — nerdy, profane, and definitely not the album for your kids. This one is like a Freddy Krueger dream after eating too much pizza and nachos and going to sleep with stomach acid trip hallucinations. In fact he literally shows up in the skit “blister packaging,” where chris comically questions Krueger about the ineffectiveness of the knives on his hand. It’s appropriate that the song that follows is “mc chris the s–t,” because he is.

“Smaller than a Smurf, I got Tic-Tac raps
I’m a Lilliputian perv, serve sick raps fast
If you don’t wanna get burned then I’d get back fast
Said a lyric cause I earn it, now get that cash
I’m older than the mountains, younger than the sea
Older than the cat in the books where that’s asleep
I can’t help but rap it’s like I got a bad disease
Got more bars than Bourbon Street, more than Wonka Tonka’s sweets”

mc chris has often both benefitted from and been hindered by his urge to self-produce his projects, so it’s pleasing to see him collaborate with Andrew Futral for the instrumentation behind the rhymes. There’s genuine boom and bap to songs like “dream warriors” and “spanky” that you wouldn’t be afraid to roll down your windows and cruise through the neighborhood to at high volume — even if people thought you might have pitched up the vocals until you tell everybody mc chris is just cool like that. chris also sing-raps his way through the rock’n’roll track “hypnocil” and (he’d probably hate this comparison) gets very Marshall Mathers on “ditched,” which also features some scratching from T. Acord.

Now I always hate having to criticize anything about mc chris since I generally enjoy his work even when some of my peers don’t, but to say this album is actually 59 minutes of music would be stretching it. “indispensible” and “scum licking” alone account for 20 minutes of just… TALKING. That’s not to say chris doesn’t have funny skits, and that you won’t enjoy listening to them at least once, but by the time you realize they take up half of the album you’ll be wondering why he didn’t write more songs instead of ad-libbing his way through comedy sketches about nightmares. A little more “muppet babies” and a little less “big meeting at netflix” would make this album better. It’s still good though.