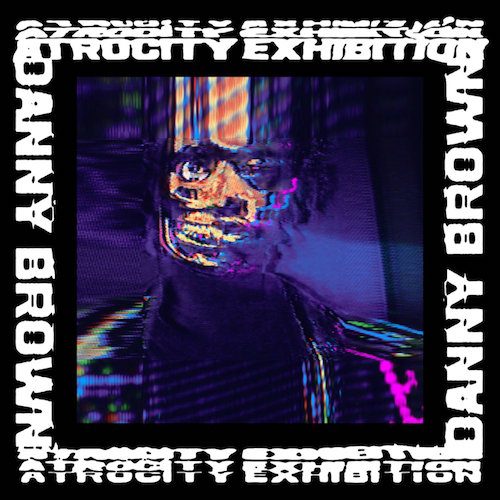 Danny Brown mostly raps about getting high and having sex, and yet he’s one of the more insightful rappers around. He’s an indie rapper who raps like a street rapper, a street rapper who works with off-kilter electronic beats and names his album after a song by seminal British post-punk band Joy Division. I’ve been a lifelong hip-hop fan and a fan of Joy Division since the 80s, and this is the first time in memory that the two have crossed. In interviews Danny Brown has described how he relates to the Joy Division song, which was about singer Ian Curtis feeling like he was a freakshow that people were paying to watch. In many ways, Brown has become his own kind of freakshow, a pill-addled maniac going crazy over a beat.

Danny Brown could no doubt have a comfortable career if he just rapped about partying over EDM beats. However, while being a crazy partier is certainly a big part of Danny Brown’s persona, he always balances it with examinations of his poor upbringing and the mental issues that both drive and are caused by his substance abuse. To paraphrase the man himself, he’s a smart dude who does dumb shit, and his music often tries to reconcile these two parts of himself.

I just read Mychal Denzel Smith’s “Invisible Man, Got the Whole World Watching,” about his experience growing up as a black man. One of the chapters deals with his struggles with anxiety and depression. Smith writes about how he felt that mental illness was a subject that his parents and many of his peers were reluctant to talk about or deal with, leaving them unequipped to deal with the stress and challenges that the trauma of racism and poverty can cause. I thought about that book listening to Danny Brown rap about dealing with depression and anxiety on “Atrocity Exhibition.” This isn’t a party album, this is an album about dealing with the emotional and psychological pain that you try to cover up with partying. It’s about early morning drug-fueled breakdowns, the intense depression that after abusing alcohol, ecstasy, and cocaine, the gut-wrenching depths that always follow a high. It’s Danny Brown’s Pagliaccio, a clown trying to laugh off the pain that poisons his heart.

It’s also a banging album that moves Danny Brown into new territory and sees him taking musical chances. Collaborator Paul White supplies Brown with several weird, low-key electronic beats that give Brown room to go off while also challenging him. “White Lines,” for example, is an off-kilter track that sounds like a demented funhouse theme. Brown is rapping about coke, but makes it seem like the most miserable experience ever (“Smoke so much I faint, drink so much you’ll think I’ll make you walk the plank”).There are a fair share of wild, dance-oriented beats (“Ain’t It Funny,” “Golddust”), although again he uses the party beats to show the downside of partying. On “Golddust” he raps:

Even “Get Hi,” his ode to weed with B-Real, is about being depressed from smoking weed. “It’s only for a moment but the troubles go away,” he raps over a ambient beat that sounds like a Brian Eno song.

The highlight of the album is the menacing “Really Doe” which features Kendrick Lamar, Ab-Soul, and Earl Sweatshirt. It’s the most conventional rap song on the album, with all four rappers bringing their A game. It’s also one of the most upbeat songs.

The album ends with “Hell for It,” a confessional track based around a drumless piano beat. It serves as Brown’s call to arms, a promise to use his experiences to move forward in life: