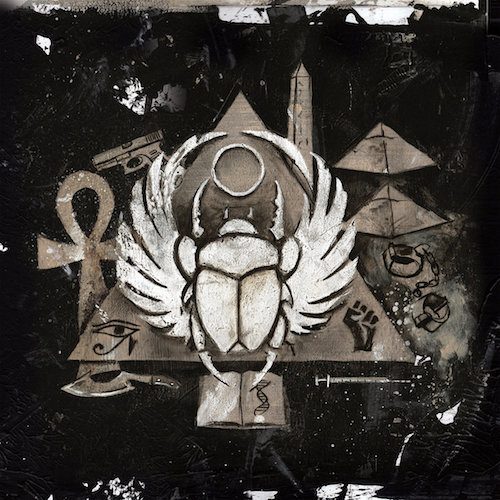 Triple Darkness are a London posse (not that one) of twelve emcees who are clearly influenced by Wu-Tang Clan and their various affiliate groups such as Sunz of Man and Gravediggaz. It’s an acquired taste, but one that is surprisingly rare in 2016, given how the Wu themselves don’t really make that classic Wu-Tang style of music any more. The only member that does is Ghostface Killah, although his recent albums have been driven by narrative rather than the potent intensity his earlier work possessed (such as “Supreme Clientele”). Tony Stark has definitely calmed as he’s matured.

Ironically, the problem with Triple Darkness’ latest offering is their lack of a Ghostface Killah. There’s plenty of talented emcees here, but they aren’t distinctive or charismatic enough to be as memorable as the Wu. Of course, comparing any crew to the Wu is harsh, but how many rap crews roll a dozen deep?

As a fan of Wu affiliates such as GP Wu and Black Market Militia, I’m in tune to the atmospheric world of dusty beats and overblown use of adjectives; it has a certain poetic charm hearing such eloquent vocabulary paired with brutal kicks and snares. Triple Darkness nail this formula when their production is hard, such as on “Delta On Venus” and the filthy “Solid Armour” (the latter benefitting from some killer flicks of a harp). It’s when the instrumentals are too repetitive that Triple Darkness’ lyrical swords start bluntening and unfortunately most of the production is too understated for my liking.

The decision to leave off their three tracks that had fans hyped for the album is baffling too, particularly as “Knuckle Dust”, “Sword Dust” and “Reanimation” are some of their better work. All three came accompanied with videos helping communicate the ominous feel to London’s underbelly, so it’s odd that they aren’t present given how difficult logistically these large crew records can be to complete.

Fair play to each member though, “Darker Than Black” still clocks in at sixteen tracks and is chockful of heavy lyricism. If you’re not a fan of abstract verbiage and historical references then you’d best steer clear – these guys could teach Killah Priest a thing or two about obscure astrological metaphors. In a way, it’s apt that the home of Shakespeare and the English language should take the templates laid down by Raekwon and Ghostface, and turn the vocabulary up to excessive levels. It’s unlikely you’ll hear penises be compared to obelisks anywhere else.

Triple Darkness in 2016 are very different from their original line-up that dropped “Anathema” in 2007. Back then they were Nasheron, Melanin 9 and Cyrus Malachi and they were three distinct emcees with their own styles – hence Triple Darkness. My main criticism of “Darker Than Black” is that those unique styles are harder to distinguish, with those three retaining their characteristics, and the addition of Tesla’s Ghost and Ray Vendetta is definitely welcome (hoping they deliver solo material soon). The other seven emcees however are similar – all competent on the microphone and certainly know their way around a pen and pad – but give the album its bloated, excessive feel.