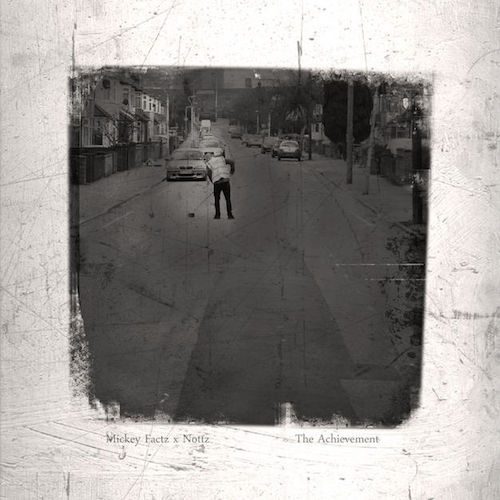 Mickey Factz & Nottz :: The Achievement: circa ’82

Have you ever looked up an artist on Google and suspected their Wikipedia page was self-authored? That’s how I felt when I came to the entry for Mickey Factz. I’m not accusing nor even saying it’s necessarily wrong if he actually did — just that everything seems awfully breezy and his career has just been one long steady climb uphill without any adversity or obstacles. He went to Afrika Bambaataa’s high school, he collaborated with Steve-O, he made XXL’s Freshman list 2009, MTV rotation and video game soundtracks followed. Okay Mickey – why aren’t you bigger than Mickey Mouse by now? Well that’s what I mean by “self-authored.” You’d think Factz was a household name the likes of Drake if you took it all at face value and didn’t question where the backsteps and backslides were.

So for the benefit of being fair to Factz (or Flair) I’m going to write into his bio my own story, and it goes a little something like this: Factz was a skilled emcee with a hunger to be a star who hustled and worked hard until he got that XXL cover and was annointed one of rap’s future kings. Being in the same class as Wale and B.o.B was a gift and a curse though as Factz got overshadowed by the meteoric rise of his peers while he was still hustling hand to mouth to get his rap on. While everybody else dropped albums on major labels, Factz got overlooked by the industry, and had to stay humble and keep on putting out mixtape after mixtape. Finally in 2016 he got the break everybody thought being a rap magazine star seven years ago was – he linked up with Nottz to produce an official album. No more free mixtapes on DatPiff and opening for local acts. The promise Factz showed back in the late 2000’s was finally coming due. With only $4.14 left in the bank he literally had no choice BUT to make it work, and that gave him the inspiration to write “414 Words.”

Now THAT is the Mickey Factz story I can get behind. All that bulls#%t on Wikipedia can be curbed in favor of Factz, the underdog who overachieved and got a record out despite everybody doubting he had what it took. Look at him now though – spitting bars with the likes of Styles P (“Vs.”), Mack Wilds x Smoke DZA x Curren$y (“Marina”) and the one that really caught me by surprise – Little Brother’s own Phonte (“Treat You Right”). I honestly mistook this one for a 9th Wonder track at first – Nottz perfectly captured that North Cakalaka Native Tongues style.

Factz: “I see the curves on your waist line (ahh) it remind me of the bass line
Cause it bump and it’s bangin at the same time, feel like a Marvin Gaye line
Mercy Mercy me! I might of heard it through the grape vine (woo!)
You’re a great find
Every B.B. King need a Queen Latifah, that’s royalty
See it’s sweeter than all the things we think is deeper (c’mon)
Soft melodies float through the sky
Like a fly ghost, hearin her voice, now that’s a high note (ha)
At the wine house with my life coach (yeah)
Love is +drugs+ and my wife +dope+ like whoa (woo!)”

You’re doing something right when you’re not blown off the page by Phonte. That’s not to say his charisma level isn’t higher than Factz, but not to the degree than collaborating with him was a mistake. It definitely wasn’t a mistake to link up with Nottz. Everybody wants to make an album with ten different producers these days, but there’s a consistent quality over the 40 minutes thanks to one man steering the ship for his emcee. If I’m going to pick one track to represent Factz the best though it’s the piano laced title track featuring Mela Machinko’s lovely singing vocals. Now you talk about a biography worth publishing, you could start right here, especially the first verse of Factz pouring his heart over the tinkling ivories.

“My cousin came home from doing twelve years
And I could tell through his voice, know he felt scared
Government won’t give him assistance
I asked him how he doin, he said ‘Welfare – it’s no help there’
I got more problems, I ain’t in Bel Air
Worryin about how my uncle feel without his health care
Is wealth near? Nigga please
Ten years later and they saying ‘Where the team?’
[…]
Ay, my open heart show the mark
Just wanna say sorry from now going forth
The rap game’s a garage so when the motor start
get your spot in front, don’t worry where Rosa parks
’05 in The Bronx, blunt roll and spark
Spice weed, smoked peppered pot, think of Tony Starks
Cold turkey gettin’ money, I don’t try the drugs
Resemblin’ Kelly Bundy, I ain’t like the +Bud+
Now I’m 34 and got a wife to love
And kids to feed when we decided on Mini-Me’s”

That’s the Mickey Factz story. He was supposed to blow up overnight and he didn’t. He was supposed to have people who were down for him and they all disappeared. He had a wife and a fam to take care of, but he couldn’t give up on his love of hip-hop. That’s the man I want to know and hear more from. This is his real freshman season. Forget all the mixtapes and start with “The Achievement” because it is one.