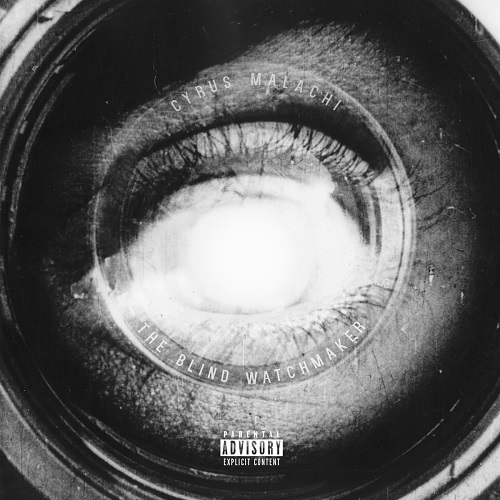 “The Blind Watchmaker” sounds like the title of a tenderly thoughtful documentary about a real-life horologist who happens to be blind or of a fantasy novel and corresponding movie starring a versatile Hollywood actor. The paradox of the ‘blind watchmaker’ has indeed appeared before, in the realm of fiction in ‘The Curious Case of Benjamin Button’ and in the domain of science courtesy of popular biologist Richard Dawkins, whose 1986 book of the same title used it to describe the mechanisms of evolution (as opposed to a creator of the universe acting as the omniscient watchmaker).

Cyrus Malachi is a name few people have heard even though he made some noise in UK hip-hop during the first half of the 2010’s and was favorably recognized by this publication. Going by the handful of songs I so far sampled starring Cyrus Malachi, he is an often magniloquent MC that like others of his kind battles challenges coming from monotone musical production, unrefined vocal performance, constrictive rap tradition, or his own aspirations.

The first MC you hear on “The Blind Watchmaker” is not Malachi, but the great Grandmaster Caz, in a performance from Ice-T’s ‘The Art of Rap’ documentary. To prelude your album with such an authority takes confidence, even when you’re coming from a position of humility. Indeed there’s a self-absorbed touch to Cyrus Malachi’s raps that don’t seem on the same wavelength as the legend’s frontline style. Vocally, Malachi is reminiscent of an elder Craig G with a thick delivery that is equal parts nasal and guttural. Speaking of, the opening tracks see him walking right into senior rap territory with lines like “You can have your skinny jeans and your make-up”. The question is, since skinny jeans are already a symbol of yesteryear, what relevance can they have in a contemporary hip-hop discourse?

The stagnant air thankfully dissipates soon. If the opening pair of tracks allow the man to introduce himself with the historical means of battling and bragging, let it be known that he’s “flippin’ ideas like a pro skater” and that his “fundamentals are airtight / Nowadays that’s a rare sight”. Hear, hear.

But the project shifts into full gear with the duet with Ric Branson (a veteran on the mic formerly of Universal Soldiers), “From the Essence”. The first minute is taken up by a sample from ‘The Intent 2’ (starring the multi-talented Ghetts), but when DJ Drinks drops an ominous piano/bass combo followed by drums swinging with pendulum precision, Cyrus stands ready to let his words ride the dark wave, painting a modern portrait of street life with vivid language. And the track gets even better with Ricochet’s studied flow as a counterpoint and Mr Brown’s final Prodigy cuts.

The album’s other producer, Evil Ed, scores “Knights of Malta” with a Muggs “Soul Assassins”-era sensibility for cinematic soundscapes. You could call this song a vindication of rap music’s conspiracy theory tendencies. The lyricist drops abstract fragments that still reveal a bigger picture, an apocalyptic panorama that covers “the four corners of this scorched Earth”. It’s an artistic rendition of the whole mess (the state of the world and the wild speculations about it), where the skyline of the City of London evokes, at least in Cyrus Malachi’s imagination, the ancient Megalithic Temples of Malta:

Malachi seems to know his way around the art world, connecting his credibility, howsoever, to landscapes by French painter Manet (not particularly known for landscapes). Following the “Basquiat” EP in 2018, the street artist who became art prodigy appears as patron saint in “Sicarios”, a foursome including Cy’s Triple Darkness comrades Ray Vendetta and Tesla’s Ghost and American cult figure of low-fi martial rap, Lone Ninja. Was Basquiat really “spray-paintin’ on bricks” “in ’86” as the hook suggests? Probably not anymore, but it makes for a nice rhyme regardless.

A different type of content found on “The Blind Watchmaker” could be more contested. Perhaps inspired by historical events or an existing work of fiction, “Murder From a Memoir” is a narrative of a femicide from the perspective of the perpetrator, not the all too common ones that occur in abusive relationships but the random ones that are a sad reality as well. Everybody in Britain is familiar with the shocking murder of Sarah Everard in London this March, and Cyrus Malachi’s “Murder From a Memoir”, although unrelated, easily strikes a sore nerve.

Much more gratifying is “The Light We Cannot See”, which sees the album return to the eyesight analogy towards the end as the Hackney representative puts his poetic acumen on full display over a smoldering, soothing Evil Ed beat. Although it lacks the aggressive slant some expect from traditional rap, Cyrus’ delivery fits the track to a tee.

Ultimately, there’s suprising variation in the vocal performance. On “Maroons” he sounds absolutely brutal like M.O.P.’s Billy Danze and Heltah Skeltah’s Rock pressed into one rock-hard rapper – without having to raise his voice and while still being able to lace his lyrics with style and grace: “I’m a poison pellet / the voice of Kemet / All I bleed is venom / Fresh oyster with a zested lemon / My rhyme palette / refined like wine cabinets / Tuscany vintage mic maverick / Blow ‘dro with hoodies on, smelly fabric / Second-round knockout like Kelly Pavlik…”

With “The Blind Watchmaker”, Cyrus Malachi serves up ritually proper lyrical food for rap purists. He namedrops unsung Harlem rap hero Loaded Lux, rhymes “plastic culture” with “Sammy Sosa” and “Elon Musk” with “elephant tusk”, leaves opponents with options worthy of consideration like “I leave you burned to a crisp / or in a vegetative state with a permanent lisp / or in a meditative state with a burn of the spliff” – and he overviews his “Londinium city streets” with a strong socio-political sentiment.

Some things about it seem predictable – the artsy street rap angle, the inevitable Roc Marciano comparisons, the recurring throwback production, more than a few lame put-downs and last but definitely not least the misogyny. Yet even seemingly foreseeable fare like closer “Brave New World 2 (New Atlantis)” turns out to be such a detailed dystopia that it might really instill fear compared to comic book-like slogan rap Americans often engage in.

However we may look at it, Cyrus Malachi does his thing regardless and thus occupies a fairly crowded niche of UK rappers who present themselves as outsiders, hermits, etc. who live their hip-hop existence unfazed by the demands of the modern world. And still “The Blind Watchmaker” doesn’t reach us from a rap no man’s land but actually latches on to several eras in hip-hop history. When he declares, “I am the fiercest, the MC who hold it dearest” in “Talisman”, he even reveals his inner Grandmaster Caz.