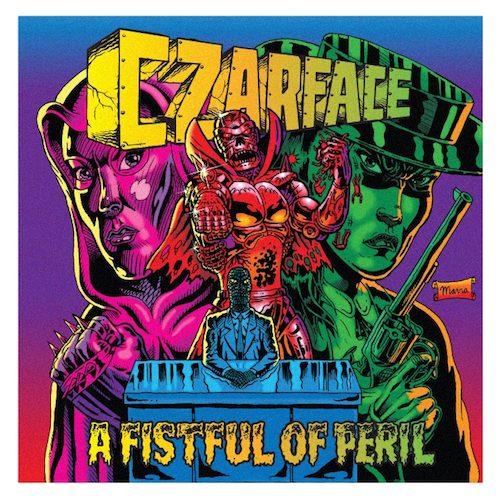 CZARFACE :: A Fistful of Peril

Comic books and hip-hop have a long history together. The Wu-Tang Clan melded kung fu and comic books with hardcore gangster rap, with several of their MCs taking on comic book alter egos. DOOM borrowed his persona from the Marvel villain Doctor Doom, and created a series of other characters inspired by comic books. More recently, Wu-Tang member Inspectah Deck teamed up with 7L and Esoteric to create CZARFACE. The supergroup continues the Wu’s tradition of combining gritty street rap with comic book themes. “A Fistful of Peril” is their third effort, coming on the heels with a collaboration with Marvel Comics.

CZARFACE’s mission statement seems to echo what Run the Jewel’s was about on their first album: make trash-talking raps over heavy beats, and have a good time doing it. There isn’t much political on this album, and lyrically it never gets much beyond battle rhymes. It’s all Esoteric and Deck and friends going off over 7L’s boom-bap beats. It is a proudly old school approach, with no acknowledgment that hip-hop has changed all all in the last 20 years. No singing, no hooks, no message beyond “I am a better rapper than you.”

And damn if they don’t have a point. After an instrumental, they start things off with a bang on “Two in the Chest,” slaying sucker MCs with their rhymes. Or, as Esoteric puts it:

“The price of death never been cheaper
And you ain’t gotta notify your next of kin neither
You can’t sleep ’cause the inn keeper is the Grim Reaper
I’m a sin eater, CZARFACE the ringleader
Bust a nine millimeter rhyme at your two-seater
Crush your spine with a lethal line, you’re an easy bleeder”

Inspectah Deck never got the fame that some of his fellow Wu members got, but he was always a consistently strong MC, if not a particularly showy one. It’s nice to hear him drop bars without having to compete for airtime with Ghostface and Method Man. His rhymes are sharp, with no sign that he is content to rest on his laurels, even if he does quote old Method Man lyrics on “Revenge on Lizard City.”

“I came to bring the pain, hardcore from the brain
And damage your mind like bad cocaine
The flamethrower started the game, it’s game over
I Holly Holm’s rappers while signing your face poster
I’m way colder, you need gloves tryna touch the kid
The Terminator with the flow, let nothing live
Voice shining, you could hardly steer
Like a judge, been handing out bars for years
Yeah, the team make cream while you daydream
Futuristic, our names up in laser beams
Imake a scene on Broadway in broad day
24/7 365, man, I’m all day
Get it right, sir, I global mogul
Flex superpower like I changed in a phone booth”

The biggest criticism I can make of the album is that sometimes it feels samey and one-note, being that it is basically 11 different versions of the same musical idea. But while there are a couple points on the 35-minute album where it starts to feel plodding, on a whole the album delivers. “A Fistful of Peril” is two skilled MCs rapping over hard-hitting beats, and definitely worth the price of admission.