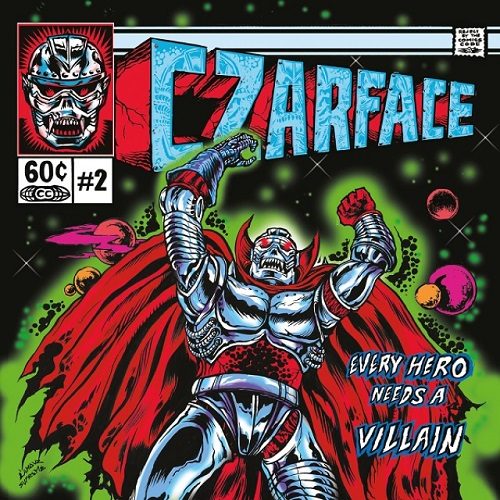 CZARFACE :: Every Hero Needs a Villain

Recently, I watched a YouTube video of Pete Rock going through Manhattan shopping for comic books. He gave viewers insight into who his favorite characters are and some of his current favorite titles. It shouldn’t have come as any surprise to me that the Chocolate Boy Wonder is a fanboy. After all, many hip-hop artists incorporate comic book references into their rhymes, art and production. As a fanboy myself, I grew up around hip-hop fans who would shit all over comic books. They would adamantly claim that they’re “gay” and merely for kids. The irony in their assessment is two-fold: One, their own juvenile behavior is completely lost on them. Two, those hip-hop fans who mocked me for being a fanboy are now the same ones who wear “Avengers” t-shirts and flock like birds to whatever the latest live-action Marvel/DC movie is being shown in the theatres (nevermind the fact that they still won’t even read a comic book).

The point is this: Hip-Hop and comics are heavily intertwined with the latter exerting quite the influence over the former. How many times have you heard rappers such as the Wu-Tang Clan, Sean Price, Apathy, MHz, El-P, MF Doom, and even Eminem make a super-hero or super-villain reference? If you’re a good listener, then the answer should be “plenty”. Everything you see at a Comic-Con is what many rappers are influenced by. It’s undeniable. The hip-hop trio CZARFACE and their two albums, even the album packaging for topic of this review, are emblematic of the connection between rap and comic book mythology.

“Every Hero Needs a Villain”. The title itself implies that rappers are super-heroes, or villains depending on their own and the listener’s stance. To apply a deeper comparison, rappers are like Marvel’s Eternals. Each Eternal has the power to manipulate cosmic energy for a variety of effects, but some have higher levels of skill and precision with their powers due to practice. For rappers, their rhymes are their super-powers, and some are better at it than others. It’s also worth noting that the CZARFACE trio represents a Boston/NYC unity that you’ll never see in professional sports. With the Beantown duo of 7L & Esoteric bringing Staten Island’s Rebel INS on the deck (see what I just did there?), their latest offering is rooted in as much boom-bap and hard-hitting rhymes as its self-titled predecessor. So who exactly are these heroes fighting against? Who are their arch-villains?

With vintage vocal samples and song titles referencing both pro-wrestling and comics, CZARFACE represents a nostalgic era that underground fans long to relive. INS and Esso have chemistry as rappers and would sound the same if not for some discernable aspects, such as their distinct northern accents as well as the former’s greater mastery over his flow. The album’s first two songs (“Czartacus” and “Lumberjack Match”) are dependent on guitar samples and contain vocal samples from former professional wrestler “Stone Cold” Steve Austin and influential comic creator Jack Kirby, respectively.

The album is entirely produced by 7L and Spada4. So while the beats aren’t as intricate as conventional wisdom (read “mainstream”) would dictate, they’re nonetheless possessed of a head-nodding vibe. The album doesn’t truly pick up until the fourth track, “Nightcrawler”. The “Transformers”/”Be Alert” nod in Deck’s verse was a nice touch, but it’s Method Man’s guest verse on it that made me press the rewind button. Though his gravelly voice is distinctive, what’s even more so is the fact that he doesn’t utter a single word of profanity. Despite that, Meth’s verse is still dope as hell:

“Red Alert” had potential, but it suffers from off-beat rhymes and a boring beat. The last minute contains the infamous “Who Shot First?” argument from the first “Star Wars” film. The marching band-style production on “Sgt. Slaughter” is interesting and shows the command over the English language that both emcees possess, with sly references to Superman and Marlon Brando’s character from “Apocalypse Now”. 7L’s production is noticeably dark on the GZA-assisted “When Gods Go Mad”. While the beats undergo a different transition for all three emcees on this track, GZA’s verse is over the most seemingly stripped-down beat. Speaking of which, “Ka-Bang!” follows the same format with MF Doom on the first verse. It’s apt that Doom makes an appearance since the concept of this album and the sampled dialogue are reminiscent of his own style.

The eight-minute “Escape from Czarkham Asylum” brings forth a menacing, dark beat with plenty of quotables. The title, an obvious reference to Arkham Asylum from “Batman”, only hints at the lyrical insanity of both men. The album ends with “Good Villains Go Last” featuring Long Island’s R.A. the Rugged Man. Of all of the tracks, this one contains my favorite Inspectah Deck verse on the album. Especially with well-crafted lines like “I reach quota, black-ops elite soldier/move +Undercover+ through +NY+: Malik Yoba”. Esoteric’s clearly no slouch either: “Look at you and look at me, you look like a shook MC/only time you load the +Clipse+ is when you put in Pusha T”. And the Rugged Man…? “Wings up, heaven raiser, I’m a thug angel/I been unstable/since bangin’ beats on a lunch table/Rock Adidas and Fedora dookie, Rev Run cable/I’m +Louder+ than Wu-Tang. Mobb Deep and Big Pun label”.

With the conclusion of the album, I can say that I enjoyed listening to the Esoteradactyl and Rebel INS fearless experiment with multi-syllable rhymes and their propensity for attacking their unseen enemy with carefully-laced verbal attacks. With the guest stars and the beats, I think this is a better album than their first. On their self-titled debut, they were having fun. This time, they had fun but with focus. Also, in deference to the title, I’m at a loss at deciding whether CZARFACE are villains or heroes. And to torture the comic-book reference cliches that I’ve littered into this review, I’m reminded of a line from the end of M. Night Shyamalan’s 2000 film “Unbreakable”: “Do you know how you can tell who the arch-villain’s going be? He’s the exact opposite of the hero!” While every hero does indeed require a villain, CZARFACE qualifies as super-powered anti-heroes.