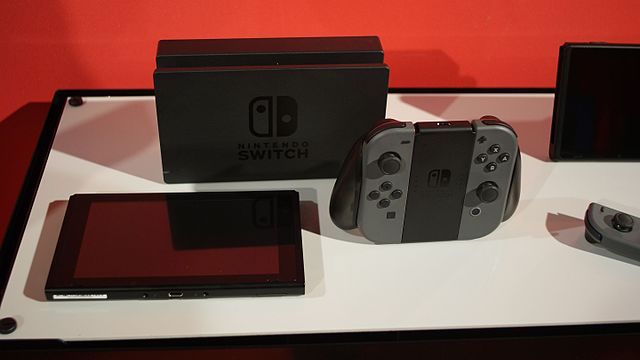 My Thoughts on the Nintendo Switch

Here are my thoughts about the Nintendo Switch after my pre-order finally came in this week. Most of America had this since last Friday, but my retailer was short stocked, so I had to wait a few days. Since I don’t update RR until Tuesday that works out almost the same anyway. In the words of Mario, “HERE WE GO!”

My first impression on taking the unit out of the box was that it was about the size of a Kindle without the Joy-Cons docked on each side, although a little slimmer and possible a little lighter. That’s pretty important considering that Nintendo is marketing the Switch as being both portable AND as a console, so you wouldn’t want anything too big or heavy. The Nintendo 3DS XL just about pushes the limit of what you can put in your pocket – if you’re wearing pants and reasonably tall. I’m not actually suggesting you’d want to or should put the Switch in your pocket, but this definitely feels like a device you’d take on the go for a trip to the coffee shop or a get together with friends. I’d still recommend getting a Nintendo Switch carrying case

2.) Switching from docked mode to handheld play is even faster than I imagined.

I have to commend Nintendo on how little space the dock itself takes up – making it easy to put it into any space you have, whether it’s on a dresser next to a TV, an entertainment center, on a shelf with your DVDs, heck I can’t think of a place it wouldn’t fit. I also have to commend them on how fast the transfer takes place when you go from playing it on your TV to removing the Switch from the dock. I expected there to be a delay of a second or two but honestly the picture was on my Switch screen before I even had it in my hands. This leads to point number three.

3.) The Joy-Cons snap on and snap off easily.

The commercials and the demo videos on YouTube were not exaggerating. You hit a release button on the back of a Joy-Con and give it a gentle tug – it slides right off. You line it up with the side of the Switch and push down – it snaps into place with an audible CLICK and accompanying finger snap audio cue. It works the same way for the Joy-Con grip, sans the sound effect, but it’s no less satisfying. It shouldn’t actually be that fun just to dock and undock controllers, but I can’t lie, I could do it repeatedly and not get tired of it. I might even want to get an extra pair of Nintendo Switch neon red Joy-Cons

just so I can change up the color scheme from standard grey – although they are a little on the pricey side.

It’s not all sunshine and roses – I do have a few nits to pick here.

4.) The eShop feels amazingly like a retailer during a “everything must go” sale.

You walk in and look around hoping you’ll find a few things they want, only the shelves have been wiped out thanks to everybody who beat you there first – only this is a virtual storefront so there should ALWAYS be plenty of stock. There’s not though. I think there was a grand total of nine games in the eShop, and one (Shovel Knight) was two of those nine, given it was being sold as either a standalone package or as a deluxe “Treasure Trove” with all the expansions they’ve released. I already told you my Virtual Console concerns but apparently Nintendo’s answer to those concerns is “Let’s just not have anything at all! Problem solved!” I have no idea how that’s supposed to be better.

5.) Once again Nintendo packaged a system with cords that are WAY too short.

I had to use a longer spare HDMI cable to reach all the way from the back of my TV to the dock, and the reason for that is because I had to put the dock on a shelf closer to my power outlet, because the AC adapter’s cord is INCREDIBLY short. I think I might need to buy an extension cord for the power supply. This wasn’t a problem in the Super Nintendo days – they gave you a cord that seemed like it could run halfway across your living room. I’m probably exaggerating but it does seem like the NES Classic was a step in the wrong direction in cord length and it’s a mistake they are more than happy to keep repeating. We shouldn’t have to buy aftermarket accessories to fix LITERAL shortcomings.

6.) Would it really have hurt their margins to include more than 32 GB internally?

That ends up being a significant problem for two reasons. First of all saved games go to the internal memory, which means even if you buy a microSD card to expand your storage space (for future eShop games for example) you can’t put your saved games on there. If you run out of space internally you’ll have to start deleting saved games – you can’t even copy your save files to ANYTHING – not even cloud storage. This wouldn’t be such a sticking point to me if 32 GB wasn’t just such a tiny amount of space in today’s gaming world. Final Fantasy X HD on the PS4 is 29 GB. Killzone Shadow Fall is 35 GB. Middle Earth – Shadow of Mordor is 35. The Witcher 3 is 28.8 GB. I know it may seem like I’m picking random examples that are huge, and I am, but ALL of those are download titles. Wouldn’t you expect comparable games on Switch to be similarly large? Even if you buy a 32 GB microSD to double the capacity you could still fill with just a few games.

Despite those concerns I think the Switch is a worthwhile investment. If you’ve got a few extra minutes to spare having read this article you can watch an unboxing below!