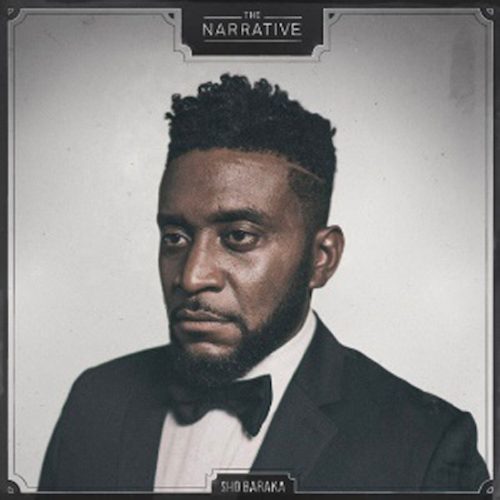 A previous review of Sho Baraka started with a bit of a dissertation about the “sub-genre of Christian rap.” That’s certainly a fair way to start a Sho Baraka review, since he’s unapologetically open about his faith and relationship with God. Just like Brother Ali and his albinism though, he’s probably a bit tired of every critic opening their reviews with a statement of the obvious. Okay just so we’re all clear and can get it out of the way right now, Baraka is Christian, and has been since before he dropped his first album “Turn My Life Up” in 2007. Do we have it out of the way now? Okay, good. Sorry Sho – it’s just one of those things people obsess about. Now let’s talk about “Here” instead – a song that references his faith but is about so much more.

“Don’t be afraid, this is the future
I know you ain’t mad, I’ll introduce ya
They might be cool, but we are cooler
We got class, so let us school ya
Fresh to death, like a million bucks
I might just go a year in bowties and Chucks
Might just go to church in a all white tux
Yeah your boy fly so you know whassup! (Whassup?)
Can the church say amen? (Can the church say amen?)
I’m here for that
When the system don’t love us, justice for the brothers
Yeah, yeah I’m here for that
You can tell all the haters, with no hesitation
I’ll take the reparation – I’m here for that
And tell all the rappers with the pimpin pimpin murder
sell drugs in they music, I ain’t feelin that”

Swoope & theBeatbreaker drop a jazzy, funky, piano backed track that would sound good with anybody (or nobody) rapping on it, but there’s a natural swagger to Sho’s delivery that really dominates the beat in an ear-pleasing way. He’s like KB in that regard, in that he comes across positive without being corny. Here’s something reviews don’t always tell you about Sho Baraka – he was born in Canada but raised in California, and saw a lot of the gang life even as he dreamed of being a rapper. There’s a hard reality to his raps given that he could have gone that route, but chose to defy peer pressure and lack of opportunity to make something of himself through military service and right living. After an already lengthy career by today’s flash in the pan hip-hop standards, the swinging uptempo vibes of “30 & Up” are funky, FUNNY and relatable to me as somebody who tends to be twice the age or more of the fans at concerts these days.

“I mean you can’t be stupid your whole life
You gotta grow up eventually…
Excuse me umm… I’ma make my way through the crowd bruh
I’m just tryin to dance with nostalgia
Classy and charmin and beautifully dressed
Of course I’m lookin fresh in my fedora and vest
If looks could kill she about to do death
Better take a pic, make it quick, Instagram it
Too old for skinny jeans too young for linens

Got a young man’s FRESH, with an old man’s wisdom
A Godly leader respected up on the block
You got your band, two knocks, twist curls or locks
I’ma act cool, Eddie Murphy +Boomerang+
You the flavor, Halle Berry, mmmm sweet thang!
We can be more, I can still be your king
You a Tracee Ellis Ross queen, child of The Supreme
I’m talkin ’bout love, they talkin ’bout lust
They don’t want to grow up, but we 30 and up!”

If somebody didn’t tell you this was a Sho Baraka song, you could mistake it for a 9th Wonder produced Little Brother track, which I mean as the highest form of compliment and is hopefully taken as such. In fact what strikes me about Sho Baraka, aside from his natural confidence and thoughtful raps (“I don’t wanna be pop/I don’t wanna be ‘Pac/I wanna be an activist but I don’t wanna get shot”), is just how well produced “The Narrative” is. I gotta give theBeatbreaker high marks because he impresses me over and over again. The live instrumentation of “Myhood, U.S.A.” could be mistaken for ?uestlove and The Roots, and again I mean that as the highest form of praise, and it applies equally well to the quietly tense “Foreword” that opens the album. Jamie Portee gets dap too for boom bap rap tracks like “Profhet” and the eerie harrowing backdrop of “Maybe Both.” In case you think Baraka is soft because he’s Godly, this song is bound to raise eyebrows by just how hard he goes at fellow churchgoers AND American hypocrisy:

“Rebuildin antebellum, they too busy to listen
I hear disturbing things come from so-called Christians
Quick to justify your man’s death
Because of a criminal record, or how a man dressed
Thugs I guess? Only perfect people get grace
If that was the Lord’s way, there’d be no one in the faith
True flaw, America kills and hides behind the law
They purchased this land with violence but never count the cost”

To bring it back full circle to my Brother Ali example earlier, the reason so many writers feel compelled to tell you about his albinism is that it’s not something you can tell simply by listening to him. I put it to you that Sho Baraka has the exact same situation when it comes to being labelled a “Christian rapper” when he drops an album like this – if you weren’t told he was how would you know he was? He probably mentions God less than any gangster rapper who shoots at his enemies and then says “God bless the dead” for his homies when they get shot. These are thoughtful and powerful songs. “Fathers” sells that you spell dad “L-O-V-E” and that doesn’t know race, religion or even genre – it’s just the nature of life itself. That’s what makes Sho Baraka such a powerful voice – he transcends all labels.