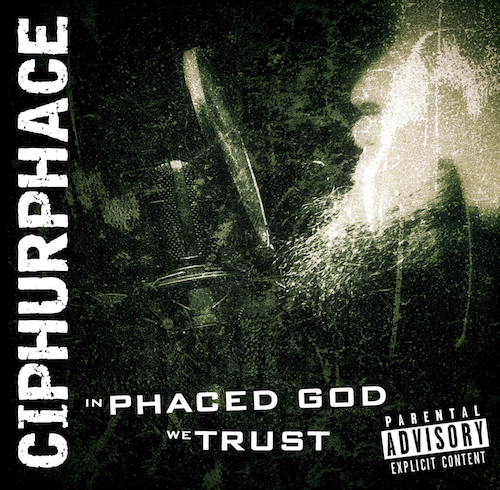 I caught the old deja vu before writing this review thinking we had already covered Ciphurphace, but a quick search of our extensive review database disproved my belief. Undaunted I keyed on a message left on his Bandcamp page reading “I checked it ’cause Palumbo said to.” Well there’s only one Palumbo I know in hip-hop and that’s Jake Palumbo, and based on that it didn’t take me long to find e-mails from Jake promoting their Moonshine Burrito collaboration. That led me further down the rabbit hole to a series of singles that Ciphur’s hard working publicist had sent to us for publication on the newsfeed, which ultimately leads me to suspect either her or Jake sent me this release, but nothing on it says for sure.

One of those singles his publicist sent me was “I’ll Always Love H.E.R.” produced by Scorpioflo, which is included on this “In Phaced God We Trust” release. It’s a pretty fly track with a catchy guitar lick backdrop and lyrics which make it a spiritual successor to Common’s “I Used to Love H.E.R.” or The Roots “Act Too” featuring Common two decades ago. He’s not trying to hide that thanks to the song title and obvious punchlines like “She’s played in mad jeeps – in the streets – she’s SOUNDBOMBIN’/a RESURRECTION would be nice – we would have things in COMMON” but my favorite hip-hop references come in verse three.

“She’s an ONYX, a DIAMOND in the rough
She got THE CHRONIC, rhymin for the love
Back then we bought it, in the store on CD
and now we get it for free in the form of MP3
Stayin true to her ROOTS, she asked us DO YOU WANT MORE?
Got a LIL FAME and asked us HOW BOUT SOME HARDCORE?
She was NAUGHTY BY NATURE, she gave us ANTHEMS galore
A PUBLIC ENEMY who FIGHTS THE POWER in stores”

He goes on to namecheck Mos Def, Reflection Eternal, Main Source and more – you get the idea – it’s a love letter to hip-hop. That doesn’t make it a profound exercise in thought or content, since I could pen a song with 35 years worth of hip-hop references, but given how little regard seems to be shown for the history of the arts these days it’s nonetheless appreciated. There’s certainly little doubt I could flow it as well as Ciphurphace, who at times has that Talib Kweli like mentality of cramming as much information into his bars as possible until he practically overflows the beats he’s flowing over. Again that’s not really a negative, just something to be aware of when listening to songs like the AF-17 produced “Age of the Icon.” There’s a very Stoupe the Enemy of Mankind vibe to AF’s beats, and amongst the density of Ciphur’s verbosity, he’s trying to make you examine some things you take for granted critically.

The Tucson, AZ based rapper also reminds me a lot of the Philadelphia based Vinnie Paz, and while nowhere near as gruff vocally, he’s got the hardcore hip-hop sensibility and a strong distrust of traditional institutions, without quite as much of the illumnati global conspiracies and penchant for harrowing verbal threats. I suppose saying he’s a cross between Paz and Kweli would be fair, if those two were even mutually compatible, but stranger things have definitely happened in hip-hop. The aforementioned Jake Palumbo produces, scratches and appears on “The Righteous Hour,” and the only thing I dislike is that it’s not a couple of minutes longer. In fact that also sums up my thoughts on “In Phaced God We Trust,” which clocks in at 24 minutes and change, meaning just when I get into the lyrical bravado of tracks like “Elbow Space” with alternating nerdy and MMA punchlines (“choke competition like Urijah Faber… can’t see me like a Bilbo Baggins”) it’s already over.

If I had to tag one major complaint with “In Phaced God We Trust” besides the fact it’s too short like Todd Shaw, it would be that the guests on “Goin’ Down” aren’t as good as Ciphur and the beat feels like a poor imitation of old school Kanye. The aforementioned “Elbow Space” could use a better beat as well. That’s really the only thing that holds Ciphurphace back, as he’s clearly got the intellect to drop gems and the flow to spit them, but with a longer album and even stronger production those gems would shine brighter.