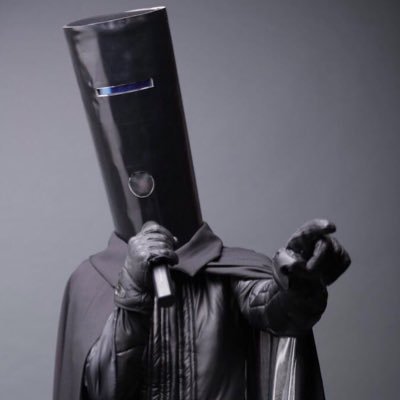 Lord Buckethead and the British Election

The only thing that gives me comfort about the absurdity of American politics is that it’s equally ridiculous everywhere else. Case in point – the person pictured here is known as “Lord Buckethead.” There are no less than three recorded times in the last 30 years that someone has donned the costume and run for political office in the United Kingdom dating all the way back to the 1980’s. The candidate is inspired by a sci-fi comedy film called Hyperspace where an incompetent Vader-esque villain lands on Earth by mistake and proceeds to terrorize the local populace, until Buckethead’s lackeys tire of being treated like crap and take off in their spaceship, leaving Buckethead behind. If you were to extend the fiction to the real world, it would only make sense for Buckethead to run as a MP after being stranded on Earth, as he/she/it now has nothing better to do than get into politics.

The fact that Lord Buckethead got 249 votes running against Theresa May is arguably no less absurd than the fact May called for an early general election in April of this year, apparently believing it would strengthen her position as the head of the Conservative Party and give her a mandate as Prime Minister going into the “Brexit” from the European Union. It dramatically and decisively had exactly the OPPOSITE effect. To have an uncontested Prime Minister, the leading party must have a majority of the seats in the House of Commons, and the “magic number” is 326. May’s party LOST approximately 30 seats while the opposition Labour Party gained almost the same amount, leaving May with only 317 seats and a situation known as a Hung parliament. Instead of validating her leadership of British government going forward, it weakened her position to the point she now has to form a coalition with a minority party just to retain her leadership role. It’s a resounding vote of no confidence in May.

It would be no less absurd for May to align herself with Lord Buckethead than the choice she’s made. Now I want to be clear that I’m a yank who’s a wank and can only comment on this as an outsider, but from reading about the Democractic Unionist Party (DUP) and speaking to friends who live there, the 10 seats they hold are not worth the long term cost in political capital for May or the Conservatives. I’d like to not paint with a broad brush since I don’t know any DUP voters or supporters personally, and will concede many of them probably support DUP candidates because they want to see Northern Ireland have strong representation in government. The problem is that this representation comes at a cost because the party’s OWN stated platform is anti-homosexual, anti-abortion, anti-Catholic and even anti-Ireland. Former DUP minister Jim Wells even boldly stated “Peter will not marry Paul in Northern Ireland” and campaigned on not legalizing same sex marriage, leaving Northern Ireland the only part of the UK to not legalize it. I imagine they’re trying to keep up the front of a cliched “man’s man” image, but I can’t think of anywhere that stereotype is played up more than Scotland, and gay marriage is certainly legal there. It leaves DUP looking regressive rather than progressive from my perspective.

May is left with two choices that are bad for her politically – admit she failed and resign as Prime Minister, or align her own party with a political group whose views seem to be from the 19th century rather than the 21st. It doesn’t seem like she’s going to admit defeat, even with Labour leader Jeremy Corbyn seizing the moment to remind May of her spectacular failure in an election SHE called for. The election of POTUS Cheeto Puff has already damaged the “special relationship” between the United States and United Kingdom, and a weak UK government formed by a Conservative/DUP coalition can only damage it further. It certainly calls into question whether or not the United Kingdom can smoothly execute the “Brexit” their own electorate called for. It’s something I’ll continue to keep an eye on, not just for my friends who live there and RR readers who follow us there, but for the fact that the Labour upswing seems to repudiate the very climate of fear and intolerance that Conservatives there and Republicans here have BOTH relied on to maintain their majority. A weak May government may be a strong sign for the future of humanity as a whole.