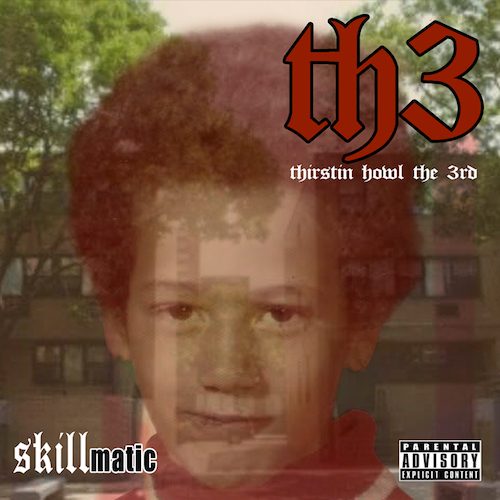 I initially toyed with the idea of not bothering to explain that the cover of Thirstin Howl the 3rd’s “Skillmatic” is a parody of the all-time hip-hop classic “Illmatic” by Nas, but it quickly dawned on me that this album is now 23 years old. There’s a whole generation of heads born since then who are younger than Nas’ official major label debut, and unless they had somebody (parent, older brother, a rap magazine or website) pointing them toward it, that’s now “old school” to them. It’s a weird concept to me that anything from the 1990’s is “old school” but even five years ago I heard Wu-Tang Clan’s debut album described the same way. In the end I chose to address it in this opening paragraph, so if you’re that young head half my age who never heard it, you might want to check out Nas first

. There’s not much to tie “Illmatic” to “Skillmatic” besides the covers and a sample of “It Ain’t Hard to Tell” featured throughout the “Criminal Slang” track featuring Shabaam Sahdeeq.

Speaking of things that have a large timespan between them, our last Thirstin Howl review was 10 years ago. He’s had at least a couple of studio albums in the interim, and probably a dozen mixtapes that aren’t part of an official discography, but either way this was the first album in all that time to get specifically pushed our way with an entreaty to check it out. Had anything else in that between time come I would have happily jumped on it because Thirstin Howl has a unique style and sound I’ve always enjoyed. I’ve had a hard time calling what he does on the mic a “flow” because it often consists of punchlines delivered one after another in a very deliberate manner. He doesn’t ignore the beats with his bars, but he doesn’t cater to them either. Howl is all about his charisma and sense of humor as a lyricist, and even though I can’t and wouldn’t advise other rappers to imitate him as a road to success, Howl works precisely because he’s completely untraditional in his approach. A whole rap game full of Thirstin Howl the 3rds wouldn’t be any good, but hip-hop definitely needs one and nobody ever has or will fill that niche the way he does.

Unfortunately one of the things Howl has often done to his own detriment is to share the spotlight with too many of his friends. You cop a Howl release to hear his unique bilingual Puerto Nuyorican flow, raunchy raps and hilarious snaps. Instead what you end up hearing is a lot of cameos from his Lo-Lifes crew. It’s not like I have anything against Master Fuol or Rack Lo — far from it — but they’re not the ones who brought me to the dance. It’s an irony that when it comes to actual technical execution of breath control and timing bars out to hit the drumbeats, his homies exceed him in ability yet don’t have his humorous personality. That’s why the moments on “Skillmatic” where we get the closest to him having the spotlight on his own are the most enjoyable, but even on the album’s title track he still shares the billing with Queensbridge legend Prodigy of Mobb Deep.

It’s also weird to say this but it feels like Thirstin Howl is trying TOO hard to be a professional now. Part of the charm of his raps was the completely diabolical way he ignored all of the rules while slobbering all over the microphone. He was rap’s less drunken Ol’ Dirty Bastard, still slurring his words in a way more attributable to his accent and background than liver damage. The evolution of the Brownsville, Brooklyn native was impossible to stop though. He’s become a full fledged businessman who franchises the Lo-Life brand from here to Japan, something directly showcased on the song “Japan Style” featuring Dak Lo as he brags “I’ll be in another country sipping on sake.”

Is it possible to have more respect for Thirstin Howl the 3rd as a successful entrepeneur while simultaneously being less interested in him as an artist? After listening to “Skillmatic” I have to say yes. Much respect to him on using the Polo fashion movement he shined a spotlight on throughout his career and springboarding off it to launch his own successful brand. As a businessman he gets a 10 out of 10 for his hustle. On his album? Quite frankly he gets bodied by his guest stars, from Sticky Fingaz to U.G. to Meyhem Lauren to the aforementioned Prodigy and Shabaam Sahdeeq. Thirstin doesn’t sound like the man I fell in love with on “Brooklyn Hard Rock” back in the day, but that sound bomb is almost 20 years old too. Thirstin became the successful millionaire of TV sitcom fame his name parodies, but with it his passion for being that unapologetic rapper who’d make the funny songs about sex and Polo gear got retired to an island we can’t chart a course to.