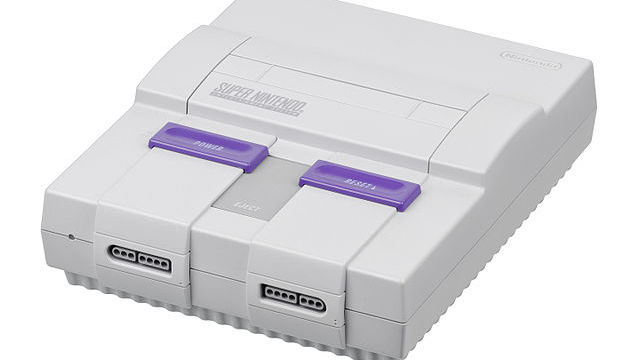 Here we go again! Last year Nintendo drastically underestimated demand for the NES Classic Edition, either intentionally or ON PURPOSE, leading to short supplies at all retailers and high prices on the secondary market for those scalpers who were able to scoop them up. Consumers pleaded with Nintendo to increase supplies so as to not give scalpers the upper hand. Nintendo responded by discontinuing the Classic altogether in April of this year after shipping just over two million units. Outraged Nintendo fans who never got their hands on one had to listen to flimsy excuses like this from Nintendo of America COO Reggie Fils-Aime: “From our perspective, it’s important to recognize where our future is and the key areas that we need to drive. We’ve got a lot going on right now and we don’t have unlimited resources.”

In what’s almost guaranteed to be a disaster of equal or greater proportions given Nintendo’s track record, the Super Nintendo Classic Edition has been announced with a worldwide release date of September 29, 2017. The hype factor is going to be through the roof for this one, and there are so many reasons why that I’m going to have to make a list and go through this one point by point.

1.) Many of the 20+ games included on the SNES Classic go for insane prices in cartridge form if you want to own and play a physical copy on an original console.

EarthBound goes for anywhere from $150 loose to $625 complete in box. Secret of Mana goes for $50 to $160. Super Mario RPG goes for $48 to $120. That’s just three examples. The suggested retail prices of the SNES Classic is $79.99 WHICH MEANS that you could buy all 20+ games for less than one complete boxed copy of any game I just named, and for almost half what a loose copy of EarthBound goes for. For people who just want to “play the games” in an official licensed Nintendo version, for whom any physical edition will do, this directly competes with the skyrocketing price point set for the cartridges by collectors and speculators.

For video game fans and historians the cancellation of Star Fox 2 is one of the most infamous incidents of the 1990’s. The sequel to the highly popular SNES game Star Fox from 1993 was 100% COMPLETE when Nintendo pumped the brakes on putting it out at retail. Many explanations have been offered as to why, some bordering on conspiracy theories about intellectual property theft and/or outright animosity toward developer Argonaut Games by Nintendo. A more generally accepted explanation is that Nintendo thought it would be poorly timed to compete with newer consoles coming onto the market that could render more sophisticated 3D graphics, including their own Nintendo 64 system. YouTube video game historian “Guru Larry” has a video on this subject I’ll include below but suffice it to say including this unreleased game will drive demand up exponentially.

For the home enthusiast with a vintage SNES console that still works but not the insane amounts of money to throw down for loose cartridges, one popular solution has been to buy devices like SD2SNES which enable you to use SD memory cards in a Super Nintendo cartridge shell. Although expensive these products still go for less than the games mentioned in my first point on the list, but there’s a big reason that even MORE of these devices aren’t out there in collector hands — a lack of support for the Super FX coprocessor. This was an extra chip added to certain SNES games to boost the power of a Super Nintendo beyond the original manufacturer’s specs. Guess what? Both Star Fox and Star Fox 2 require it, so unless your SD card intermediary can emulate it (none currently can though some have promised to in the future) you’re out of luck. This also rules out Super Mario 2: Yoshi’s Island, and ANOTHER unsuccessfully emulated enhancement chip named SA-1 also rules out Kirby Super Star and Super Mario RPG. As you can see with a great deal of “enhanced” titles on the SNES Classic, these offer an option to play these games that’s cheaper than original carts and incompatible with SD carts.

The very fact Nintendo manufactured the NES Classic and is now ramping up for the SNES Classic is because they’ve tapped into the fact that aging gamers pine for the retro games they played as a kid, a teen, or in their 20’s. Two to three decades after the fact, we want to relive those old memories, and there’s few better ways to do that than one of these handy devices. Even if you have an old Super Nintendo you may have a brand new HDMI TV with no way to hook it up. Uh-oh. “Upscalers” exist but those solutions range from cheap and tolerable

to cheap and unreliable

to products so stupidly expensive I won’t even link to them here. If you want the “no muss no fuss” box with built in HDMI output to your HDMI TV, the NES Classic was a quick fix, although an unfortunately cost prohibitive one thanks to scalpers buying them all up. That probably drove some people to wolf down a slice of RetroPie but that again requires manufacturing and programming know-how. Is it worth the time to learn how make your own HDMI emulation box if SNES Classic prices skyrocket? We’ll see. I know a few video game critics who might say Nintendo has it coming if people do.

5.) Nintendo has already proven they just can’t be trusted to make enough.

On the spectrum of “Nintendo fan boy” I fall in the middle between “sap who will buy anything they make” and “outraged nerd who thinks the company is bollocks.” The pendulum has swung both ways although I’d find it more productive and pleasant if it didn’t swing at ALL and stuck to the midpoint between of “they do some things I like and some things that I don’t.” Generally I can keep it an even keel right down the middle EXCEPT when there’s no good reason for Nintendo not to shovel more silicon and plastic into the factory and MAKE MORE STUFF. The cost of the constituent parts is very low, the profit margin is VERY HIGH, and if they simply made more of everything they’d make more money AND deny scalpers the secondary market they profit from. They didn’t do that with Amiibos though, and they didn’t do that with the NES Classic, so if you think they’re going to do that with the SNES Classic my advice is “think again” and pre-order if you want one. Don’t trust the supplies in stores to not be scooped up and scalped out. It WILL happen.