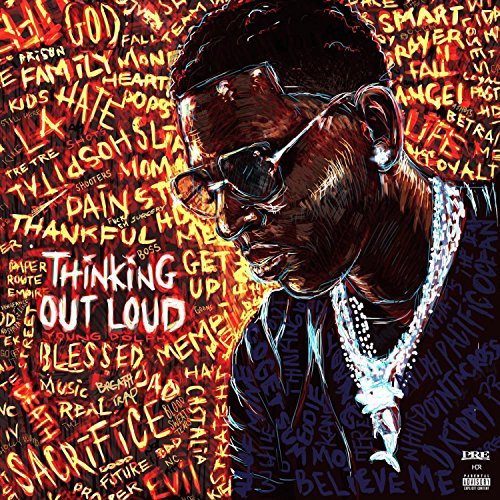 “Grew up bumping Dwayne but turned to a boss like Shawn Carter
Carter, Carter, Carter…
Lil b***h on my d**k, she says she want a star
Lil nigga signed his life away for Jordans and a car
Told my grandma what I’m worth and she said ‘Oh my God!’
He said he used to have that work, we don’t believe you BOY!!”

The Chicago born, Memphis raised Young Dolph has a deep voice and a dedicated mixtape following. His story is a sadly familiar one from rap artists – broken home, drug addict parents, hustling on the streets from an early age just to stay alive by any means. Nine years ago he had a pair of back-to-back experiences which caused him to find new focus – nearly dying in a serious auto accident and losing his grandmother to cancer. After that when his friends told him they liked his music, even though he had just been doing it for fun, he decided to buckle down and go after a rap career as hard as he could.

Well over a dozen mixtapes and three studio albums later, the self-described “King of Memphis” has firmly cemented his place on the rap scene. “Thinking Out Loud” is his fourth album released to retail, coming directly after an incident in Los Angeles where Young Dolph was shot multiple times but survived. It was the second attempt on his life this year alone after hundreds of bullets riddled his armor plated SUV in February. Success is definitely not all it’s cracked up to be, but on “Believe Me” he’ll try to convince you it’s still all good.

“Yeah – neck full of ice
Did a lot of wrongs just to get my money right
I tell these rappers stay away with that fake s**t
Cause I got niggaz round me that still like to take s**t
She calls all my cars spaceships, yeah
I work the trap in the day shift, yeah
A crack baby worth ten mill, yeah
Still turnin down record deals – ha”

“Thinking Out Loud” isn’t an overly long album, clocking in at just under 36 minutes long with ten total tracks, but given his prodigious mixtape outpit and the number of times he’s been shot at in 2017, it’s somewhat miraculous this album came out at all. With all of that going on he probably didn’t have that much time to recruit heavy hitters for cameo appearances, but he still managed to round up 2 Chainz, Gucci Mane and Ty Dolla $ign to ALL appear on the song “Go Get Sum Mo.”

If you listen to Dolph for long enough it becomes a little more evident why he’s become a target for people to take shots at him, though I wish they were doing it verbally instead of with gunfire. Y.D. is not shy about bragging about how much money he makes and how much money he spends, which could easily inspire envy and jealousy. Memphis has gained a reputation for violence on par with Detroit, St. Louis and Oakland so there are no shortage of people who could take exception to the kind of flossing heard on the aptly named “Eddie Cane.”

“Took a lot of chances, hurt a lot of feelings, dodged a lot of cases
Bad b***h didn’t want s**t from me but penetration
Chasing a hundred M’s but I’m starting to get impatient
Benjamin Franklin my favorite
I stay fly in the latest, yeah yeah
These millions getting contagious
Half a million dollar coupe look just like a spaceship”

That’s the second time Dolph has referred to one of his vehicles as a “spaceship” just in the lyrics quoted. It’s certainly an evocative way to describe an expensive and possibly foreign made car, but the imagery loses its potentcy when repeated multiple times. The same can be said of Dolph’s braggadociousness about his wealth, the bad dudes he rolls with, and the bad b***hes he sleeps with. It’s not as though songs like “All of Mine” featuring DRAM (produced by OZ) aren’t catchy, it’s just that you’ve heard him say the same things before on other songs. The strength of his voice and charisma and the sound of the beats by Zaytoven, Drumma Boy, Mike Will Made It and Buddha Bless among others do the heavy lifting here.

The perplexing thing is that Dolph certainly has the potential to go deeper. The opening lyrical quote from “Pacific Ocean” shows a business mind that’s carefully calculating and entrepeneurial, both bragging about his good business sense and mocking others who signed on the dotted line for what MC Serch once called “a box of Newports and Puma sweats.” I’d love to hear more of that and more of Dolph’s real life harrowing exploits given how many times he’s been caught in bad situations and still come out on top. Dolph has a great story, he just needs to tell it more often and not focus so much on showing off.