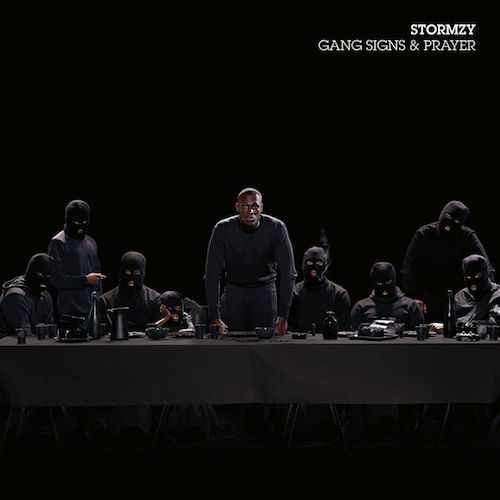 Stormzy is the #1 rapper in the UK right now. I’m not talking about skills, discographies or how much money he’s got in the bank – Stormzy is a household name who simply has that crossover appeal so few British emcees manage to attain. He uses Twitter correctly for his thoughts on politics or racial injustice, but also for chatting about his favorite television shows. He’ll pop up in Love Island or as a guest judge on X-Factor, without losing that respect he’s earned from the grime scene. Given how long the likes of Skepta have been around, Stormzy is a product of a viral hit (“Shut Up”) yet hasn’t relied on a straightforward formula to try and replicate that success, instead crafting his brand carefully and delivering one of the best grime albums to date. Stormzy’s debut album “Gang Signs & Prayer” is the first grime record to reach #1 in the UK charts. Grime isn’t exactly new, but this record represents a pivotal switch – bear in mind that previous chart-toppers such as Tinie Tempah and Dizzee Rascal never accomplished this, despite garnering a large pop following. The seminal “Boy In Da Corner” peaked at #23, proving sales aren’t the be-all and end-all. So how does “Gang Signs & Prayer” stand up to the few grime classics in a genre dominated by singles and mixtapes?

Firstly, I want to commend Stormzy for not propping up his album with popular singles from years ago, a la Skepta’s “Konnichiwa”. 2015’s “Standard” and “Know Me From” remain big grime tracks and could have bolstered the tracklisting, yet they don’t represent 2017 Stormzy. In an era of streaming and easy access to artists’ discographies, there’s no real need to throw years-old singles on to your new album. Straight from the outset there’s a bigger budget feel: “First Things First” demonstrates the mature head on young shoulders, sharing his struggle with depression, “blackballing” and the different treatment he now receives given he’s famous. Being the ‘local lad done good’ is something Stormzy is very aware of, noting he “just went to the park with my friends and I charted”.

Stormzy even sings on “Blinded By Your Grace Pt. 1”, a time-out moment separating the two aggressive songs “Bad Boys” and “Big For Your Boots”. The former features a typically vicious verse from Ghetts but is offset by J Hus’ alt-Caribbean hook, but the latter is everything Stormzy represents in one song:

Admitting he attended an Adele gig and sang his heart out to it, and to showing no interest in designer brand clothing are confessions not usually associated with a hugely popular emcee. I found this not only refreshing in an era where emcees (or more commonly, the fans) still insist enjoying anything popular or emotional is a knock on your masculinity, but the reiterative stance that nobody is too big for anything is appreciated. Acting like you’re too gangsta to enjoy Adele is funny, especially when you know the hardest of hard rappers don’t tend to think that way (see M.O.P’s Lil’ Fame spitting to Sade). Part of Stormzy’s appeal certainly feels a bit Mike Skinner – a regular guy whose talent unravelled and captured a generation.

A lot of rap albums struggle to find that balance between in-your-face attitude and mature storytelling, and Stormzy approaches this issue by unashamedly flitting between the two without ever detrimenting the flow of the record. Thumping two-step “Return of the Rucksack” to laid back crooning with Wretch 32 on “21 Gun Salute”. Taking the listener on a 6 minute trek with Lily Allen and Kehlani, then smacking them in the face with the colossal banger “Mr. Skeng” (aka freestyle beat of the year). On paper it sounds all over the place, but it somehow works. There is method to this madness and “Gang Signs & Prayer” owes much to how serious Stormzy considers the album format in 2017. Grime LPs are few and far between.

Hearing “Shut Up” towards the end of the album is a wise decision, showing just how far Stormzy has grown as an artist but also reminding all the so-called haters who doubted that his success could be sustained, to simply shut up. Stormzy’s here to stay.