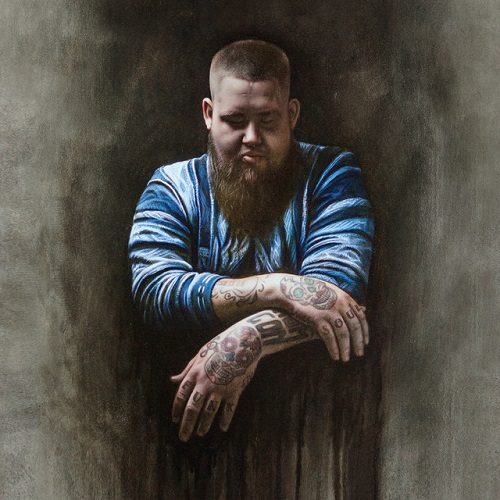 Some people may know Rag’n’Bone Man from his 2013 EP with rapper/producer Leaf Dog, or his numerous guest spots on UK underground hip-hop releases between 2012 and 2015, or his stint with Brighton-based rap collective Rum Committee. The overwhelming majority of people who came into contact with his music, however, most certainly did so through “Human,” his widely successful breakout hit, which, depending on where you live, climbed up the charts in late 2016 or early 2017.

Corroboration and concerns typically balance each other when an indie artist crosses over, and in Rag’n’Bone’s case the distance that had to be overcome was particularly dratstic, from servicing rappers named Smellington Piff and Stig of the Dump with sung hooks to becoming the star of the show overnight and going platinum in a dozen countries. At the same time the singer has obviously been able to use his presumed handicaps to his advantage. Or if you want to be cynical about it, he’s momentarily served as the music industry’s token authentic guy, his working bluesman routine even falling in line with hipsterdom’s championing of all things handmade.

So as pleasant a surprise as “Human” was, longer and loyal fans couldn’t fail to notice that the album named after the hit single didn’t have one rap feature from the High Focus roster or beat by former collaborators Leaf Dog and Dirty Dike. Instead producer Two Inch Punch is on board, a one-time associate of Benny Blanco (himself one of the biggest names in pop production today) with recent credits including Sam Smith and Tory Lanez.

Still Rag’n’Bone Man’s full-length debut doesn’t stray too far from his five previous EPs. The album ends with the acapella “Die Easy” that opened 2012’s “Bluestown.” “Human,” the universal plea for clemency, is placed at the beginning, able to take full effect, from the opening melange of percussive elements from gospel and funk to when the baritone sets in to deliver two well-written three-liners each followed by the conclusion “I’m only human after all.” By the time the singer goes into belting mode, the beat is on full blast, only to fall back into contemplation again. As lyrically succint as the song is, the message is powerful, especially noteworthy for the specific refusal “Don’t put your blame on me.” “Human” could be seen as overly apologetic and therefore all too ‘human’, but by reflecting on the often helpless human condition it still makes a difference in this pop (and rap) world of superhumans.

Subsequently Rory Graham’s stately, soulful voice soars across the melodic and rhythmic valleys and peaks producers like Mark Crew, Jonny Coffer, Braque and the aforementioned Two Inch Punch line beneath him. The music is varied and competent, old school instrumentation with the slightest modern touches. In terms of hip-hop influences, “Be the Man” could, at least early on, be an Atmosphere/Ant track with its down-home piano/drum combo. “Innocent Man” samples Isaac Hayes drums, “Ego” arranges piano, trumpet and female vocals in Jake One fashion, while the singer himself briefly shows off the rap chops that he honed on the local scene in Brighton.

Rap being Rag’n’Bone Man’s musical roots could be an asset to the songwriting. Yet the songs on “Human” often feel suspiciously vague and curt. “Innocent Man” is a most basic jailhouse lament. “Bitter End,” “Love You Any Less,” “Grace” and “Arrow” are average songs describing some feeling or situation, almost more concerned about the decorative musical elements they feature – which range from goth and pop rock to country and Motown. “Skin” is apparently in some fashion inspired by the hit series ‘Game of Thrones’. As an overarching topic, faith is the elephant in the room, still best addressed in the title track’s “I’m no prophet or messiah / You should go looking somewhere higher.” Put harshly, you could say that he borrows from blues without really singing the blues, that he borrows from gospel without really spreading the gospel, that he borrows from rock… etc.

The creators of “Human” went about it in a very traditional and surely safe way, bent on establishing the mystique of the singer with plenty of seriousness and heroics. As far as bearing his soul, Rag’n’Bone is frequently touching (vocally moreso than lyrically), but not yet in Amy or Adele fashion. But the way he describes the mutual dependence between baby girl and father in “Odetta” or goes to the bottom of the human touch in “As You Are” is highly sympathetic.

The bonus tracks you may come across (seven in the deluxe edition), such as the intense “The Fire” (featuring another substantial rap part), the funky “Your Way Or the Rope,” the purging “Healed,” or “Fade to Nothing,” a partly sore, partly scoffing analysis of a relationship, surpass some of the official twelve tracks. Either way, for further pursuits, Rag’n’Bone Man needs to think more thoroughly about what exact story he wants to tell. Until then, “Human” is a heartwarming, mature pop album. Maybe it’s been a wise decision to tone down the artist’s hip-hop and rap background for now. But just the same, it could also have played a credible role.