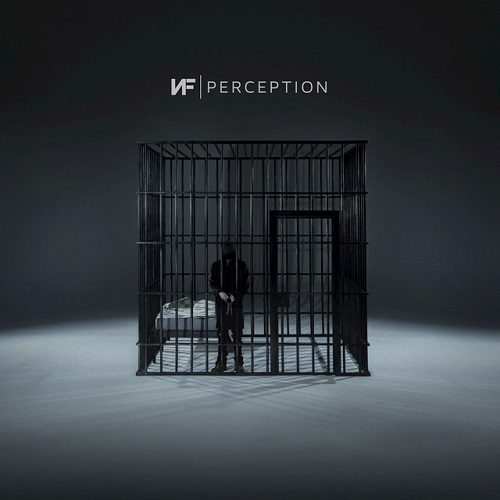 In the run-up to Eminem’s latest, I caught a song on the radio that had me believing I was listening to a “Revival” teaser. Vocal tone, structure and instrumentation were at least in the vicinity. Admittedly the only more recent Em song that at that point still lingered in my memory was the one that I assume is called “Monster,” and in my state of self-preservative Marshall Mathers ignorance what I picked up on the car radio sounded vaguely like a sensible comeback.

“Revival” firmly let me know I was wrong. On a number of levels. It was someone else’s song, as far as I can tell now, “Let You Down,” the third single off NF’s “Perception.” I ended up spending time with both releases, the obligatory one by Eminem and the curiously obscure one by NF. Both happen to be Billboard 200 number 1 albums. To get any misconceptions out of the way, NF is no Eminem, not by the longest shot. “Revival” holds the premium emceeing that defines the Eminem legacy, that which remains after you subtract all the self-sabotage. “Perception” is a personal but guarded and professional but mechanical work from a rap artist who patterns his basic manner of expression after Eminem, but artistically has little else in common with one of the paragons of the artform.

Nathan Feuerstein, ostensibly a hard worker, has found an audience in a relatively short time span. “Perception” is his third retail album in three years, following a presumably intense release called “Therapy Session.” NF appears to chronicle his mental and general condition with his music (recalling Eminem as well, see “Relapse,” “Recovery” and “Revival”), which would make “Perception” the latest update on his personal wellbeing. He’s not oblivious to conventional success, but he’s not necessarily coming from a business perspective when he says, “A lotta pressure on a record, so you know I’m makin’ diamonds.”

If the opening “Intro III” makes you feel that you’re late to something, the track itself launches head-on into an inner dialogue, with two voices engaged in a suspenseful power struggle. The psychological thriller scenario in which the conflict unfolds and the undeniable dynamic of the dispute set up certain expectations – also artistic ones – for what follows.

The final act of “Intro III” segues into “Outcast,” and from here on it’s the listener who becomes the subject of manipulation. NF appears to be the kind of artist who lays his proverbial soul bare, but at the same time he will assertively let you know what you should think you see. Honesty on his part invariably gets instrumentalized to build his myth. The exclamation “I just be the outcast!” is just the tip of an iceberg of charmless remarks that aren’t softened by the rapper claiming, “I’m high off the music, my head’s in the clouds / I kinda like it up here, I’m not comin’ down” during a spooky break.

“Outcast” pretty much determines the direction of “Perception.” It’s not that NF can’t argue his position sufficiently, it’s what he makes out of it. The album is an entirely dreary affair, the only silver lining the listener is allowed to see the fact that NF seems to do alright for now. In terms of actual musical and lyrical enjoyment there’s not much on offer, aside from the fact that he’s passable at delivering these raps with some intensity and precision. The imagery is either gloomy (“I am at a table of liars but don’t eat what they feed me / My hoodie over my face so nobody can see me”) or non-existent, like the part in “10 Feet Down” where he propounds, “I’ve always been motivated by comments from people tellin’ me things they think I’ll never be, and then I become it”. Is it even possible to express that with less esprit?

This hints at a major misconfiguration of “Perception” (minus the promising intro) – there’s no underlying creative motivation noticeable. NF has personal issues, and rap seems to him as good a vehicle to overcome them as any. He’s not bad at it, but there’s a monkey-see-monkey-do vibe to his performance. There’s no connection to what you might call the greater hip-hop heritage, it’s just someone rapping for his own health and self. He’s typically forcing rhymes without the least bit of flair. His basic writing is spiffed up by a quickfire delivery. Alleged superiority or serenity aren’t really substantiated.

“Green Lights” shows how easily the rhetoric of the outsider can take on an inconsiderate undertone. When he hurls out hasty assumptions like “All I spit is real life / but you don’t know what that’s like,” the collective answer should be: “What are you talking about?” It goes without saying that with his emotional configuration NF reaches people who can relate to him. NF is hurting and chances are there are people who feel his pain, who even feel represented by him. Just as likely, however, the fishing for sympathy is liable to provoke defiant indifference.

In all fairness, the Michigan rapper at times makes an effort to break down the wall he builds. “Green Lights” indicates that he’s not the total stand-alone guy, plus it features the kind of tongue-in-cheek origin story that can also be found in the earliest rap songs from forty years ago:

“I know where I’m goin’, I don’t let no one distract me
I don’t need directions from nobody in the backseat
I don’t need these people in my corner tryina gas me
I rather have people in my corner tryina check me
[…]
Who you know droppin’ clean records but they nasty
I was made for this, I could tell when mama had me
I hopped right off the table, told my doctor: ‘I ain’t average’
He asked me: ‘What does that mean?’
I told him: ‘Get the pen and pad, please'”

Also, the stylistic proximity to Big Sean of a track like “Dreams” is not entirely unflattering, the melancholy allowing more room for honesty, or at least the appearance thereof. The reprocessing of personal stuff in the vein of “Let You Down” is prone to restrain a rap critic from being too critical. And yes, a song like this would be a feat for Eminem because it would mean he can keep a straight face while delivering content of emotional quality. For more pros, the hook to “My Life,” accidentally also with contemporary cachet, is one of the more seasoned moments on the longplayer because for a brief moment playfulness prevails. And while “You’re Special” sounds like a teenager’s take on the Drake format, the following “If You Want Love” carries a much more mature note with its message that those who seek love should be willing to make an emotional investment.

On the surface, NF displays a variety of properties that are rarely fundamentally disputed in rap. Some entirely positively denoted like rapping about what you know, some bearing a double-edged significance like overreacting to insecurities. The problem is that the rapper in his mid-twenties manages to take most of the fun out of dealing with the world in rap fashion. Would it be too much to say that one of the fascinating aspects about rap in general is the unforeseen? When real rappers go off, you can never be sure where they will end up, where a stream of consciousness will take them, what absurd heights a hyperbole will reach, what punchline waits to knock you out. In NF’s hands, this rap thing feels awfully calculated. He’s going a little bit crazy, doing a little bit of singing, and if that fails, pours out rhyme cascades that leave little room for dissent.

The rapper on “Perception” is foreseeable, completely by design. The aggressive, separatist ambiance is just there, without being explained or examined the way great writers can. And so most of the album’s features are strictly serviceable. That may conform to NF’s motto “If I took the hand that was dealt me, then I would be nowhere in life,” but it relegates you to spectator of a self-help project by someone who fails to see the world for his personal problems with it. “Know” has a beat that means business (circa Shady Records heydays style), yet falls flat on its face due to unsubstantial claims like “I have created my own style / I have created my own sound” and label slander that is just dishonest coming from someone with major label support. The most absurd song may be “Destiny,” a compression of NF’s trappish and theatralic side with a rapper too full of himself to realize the big pile of crap he produces.

As far as features go, the tracklist highlights Ruelle for “10 Feet Down,” perhaps because she figures as a stand-in for Bebe Rexha and her ilk with eerie delivery and undefinable accent and/or vocal effects. The music on the album emits impersonal professionalism and sounds like it was put together by anonymous studio stooges. It’s almost refreshing being able to put a label on it just once for “Remember This” with its set-up akin to no-budget ’00s indie rap. (Of which “Lie” would be the current version.) When the music on “Perception” is not primarily functional, it’s commonplace contemporary, to the point where offerings like “One Hundred” or “10 Feet Down” are nothing more than 2017 pop rap mimickry.

NF is very self-aware. He goes as far as questioning his angle to feed fans with emotions in the outro to “Perception.” In this reviewer’s opinion, however, self-consciousness is but the first step. NF the artist strikes me as the potential result of an unfortunate scenario where some kid decides to teach himself the rap ropes, spending entirely too much time spinning that cocoon in which he’s a skilled rapper but a social outsider. Take it from all the other white rappers who came in from outside and build some relationships that help you broaden your horizon. Ain’t no artistic future in being an angry loner. “I make songs, I don’t make friends”? How about both? “Same style, but the songs are better”? Not yet good enough.