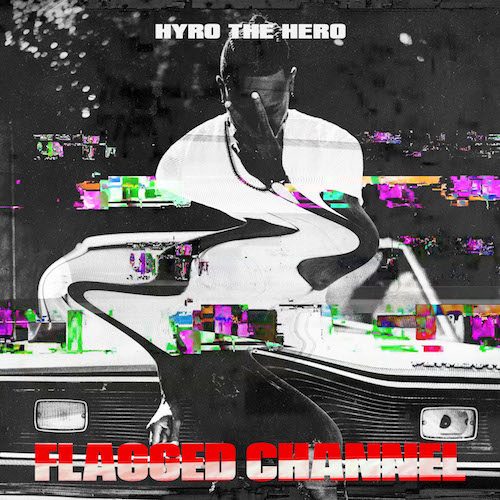 Whether you call him “Hyro Da” or “Hyro The,” the Houstonian born and L.A. living Hyron Fenton has been on the scene since he first moved to the Left Coast back in 2007. His style is alternatively described as “rap rock” or “post hardcore” or “punk” depending on who is doing the listening. To date he’s toured the United Kingdom, Ireland, Australia and Japan, performed at the Download, Soundwave and Summer Sonic Festivals, and released multiple mixtapes before today’s second studio album entitled “Flagged Channel.” Seems that whatever genre you choose to peg Hyro in he’s doing pretty well for himself, having even toured with Hollywood Undead and the Deftones. The more I do background research on Hyro for this review, the more I ponder why I’ve never come across a musician this accomplished before now.

Two tracks into “Flagged Channel” I’ve figured out why. At first I believed it might have been the natural confusion an artist named “Hyro” based in Cali might have with the long established Hieroglyphics crew, often called “Hiero” for short (“Hiero, I know, I’m a fly bro.”) Once I got a taste of THIS Hyro though there was no mistaking one for the other. In fact if you’d mistake Mr. Fenton for anyone it wouldn’t be Casual, Del or A-Plus – it would be former Rage Against the Machine frontman Zacharias Manuel de la Rocha. In fact close your eyes just for a moment while listening to the lead single “Bullet” and tell me that the emphatically screamed lyrical delivery paired with crunchy guitar rock riffs isn’t a DEAD RINGER for Rage.

Given their wildly different backgrounds it’s a remarkably eerie coincidence how similar the two are. Given that de la Rocha is 18 years older than Fenton it leads me to believe that on some level Rage’s music both inspired and influenced Hyro’s style. There’s a notable irony in that Rage reunited after almost a decade apart in 2007, the same year Fenton began releasing music, although they broke up again in 2011 and have not come back since. It may or may not be fair to say that Fenton is carrying the torch they dropped, but when listening to tracks like “Devil in Disguise” I can’t help but hear the musical relationship between the two.

The weird thing about Hyro is that if you asked me who the guitarist for Rage was I could tell you his name is Tom Morello without thinking about it for a second, yet my first glance through Hyro’s press kit only turned up descriptions like “one part The Clash, one part Bad Brains, and several doses of .. hip-hop.” Finally after several read-throughs I stumbled across what MIGHT be the relevant details: “Nu-metal co-creator Ross Robinson (Slipknot, Korn, Glassjaw) with instrumental contributions from members of frequent Robinson collaborators At The Drive-In and The Blood Brothers.” The only problem there is that these are described as his collaborators on his FIRST album “Birth, School, Work, Death” without actually confirming they are his band for “Flagged Channel.” Given no other information to confirm or deny it either way let’s assume they are.

To quote from the press kit one more time, Hyro’s lyrical delivery is described as “lyrical missives (that) target the vacuous materialism of the rap world’s biggest pretenders with precision wordplay.” Take this example from “We Ain’t Afraid” as an example of what they’re talking about:

“They mace us, trying to taze us, closeted racists
Invasion, they tryin to erase us, but we can save us!
Can’t stand the heat get yo’ ass out the f—kin kitchen
Stop talking so much — listen!
HYPOCRISY with no APOLOGY, this s–t BOTHERS me
We live in mediocrisy, the ghetto foreign policy
I don’t see our nation looking lesser, we apply pressure
We’ll never ever let up, WE FED UP!”

It bears repeating that the political polemics are VERY difficult to discern from de la Rocha’s, particularly when Hyro screams “There’s power in the people come together with they fists raised, we ain’t afraid!!” over and over in the chorus. While listening to this 45+ minute album I vacillated back and forth over whether I considered it a compliment (given I like Rage) or a criticism (given it’s damn near style biting) and ultimately leaned more toward the former than the latter. Besides given the on-again off-again relationship of RATM’s bandmates it feels like Hyro The Hero can fill the void they left behind with his adrenaline fueled delivery and Rage-like musical backdrop. What I now find surprising isn’t that I’ve never heard of Hyro before now but that I’ve never heard Hyro on OCTANE before now. His rap-rock fusion would fit perfectly into the mix on SiriusXM and I question why they’ve yet to give him a chance.