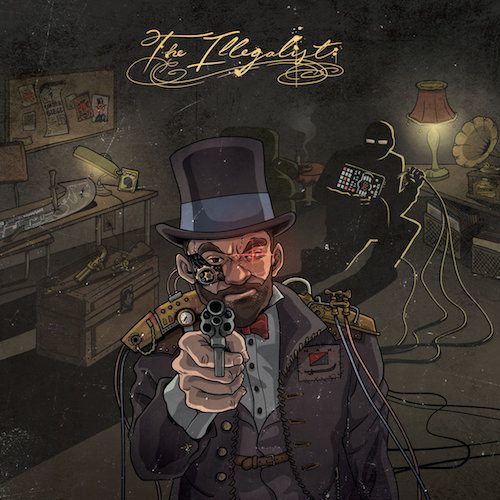 Previously on “Wunderland Apokalypse,” the deep raspy flow of Big Lo took us on a musical journey to the exotic shores of distant audio isles. It was a literal acid trip where the destination was a bizarre mixture of “Alice in Wonderland” and “Apocalypse Now.” It is that very inventiveness that has made me a fan of his work since first dicovering him back in 2016. You can hear the influence of past greats like Cormega and Guru in his delivery and vocal tone, although he stands toe to toe with modern day East coast emcees like Action Bronson and Your Old Droog. With a slow flow that could make Parrish Smith jealous, Big Lo invites you to ponder his raps and immerse yourself in the narrative worlds he builds on beats. Take the CxxxLxxx produced “The Saint” for example, dripping all over haunted xylophones and flutes.

“Yo, Peter hates me, all minks and fresh leather
I’m on top of the food chain with a bare head severed
So cinematic, elegant crafted
Zoomin off in the Aston, sound like Griselda ad-libs
All classics, snow skiing in Aspen
Klass jackets, hot springs and luxury cabins”

This brief snippet of dialogue might give you the impression Big Lo is only about wealth. He’s not above flossing lovely. “Give me the Teslas with the optionals too” quips Lo on “Future World,” painting the impression of enviable disposable income, but he’s also all about his microphone mastery. “Yes I’m so nice like first dates and holding back on the whole pipe/I don’t play well with others, give me the whole pie/Must suck to be young and outrapped by the old guy.” It’s the witty way that Lo brags about his skills in combination with his vocal style and delivery that helps to set him apart in today’s incredibly overcrowded rap field.

Another thing that seems to be a recurring theme for Lo is his brevity. I’m probably showing my age when I think of “albums” as being something longer than 40 minutes and closer to an hour. Once again on “The Illegalist” we have an “album” that clocks in well under 30 minutes. I’ve stood in line to get into venues anywhere from three to six times the length of this album — in rare cases longer than that. If I put this joint on my phone to listen to during that wait and hadn’t loaded anything else, I’d be mashing the hell out of the repeat button. I dig the “quality over quantity” vibe that Lo is on, but tracks like the 93 second long “Gulf of Aden” could be twice as long and probably not dip in quality — he’d just have to write more bars. Writing is not a weakness of Lo’s style as proven by the dark and disturbed “Tracksuits” or the airy “Tipping Point” also featuring Jamal Steele.

All I’m saying Lo is I know you’ve got the chops to handle this on a much larger level. If you’ve got two and a half minutes of good ideas on a track, another minute isn’t a stretch, nor is adding enough songs to make the playlist more than a half hour. I think if I loaded up three Big Lo albums back to back it might equal out to a solid hour, and a very enjoyable one at that, but I’m itching for Big Lo to hit us with that big dose that’s damn near an overdose.